'When You're Really Close And It's Snatched Away From You': Natalya Coyle Reacts To Olympics Heartbreak

Coyle’s dreams were shattered after a her horse Constantin essentially went rogue on her, all but ending her medal hopes.

Coyle was brave and inspirational but clearly devastated when speaking to RTÉ's Paul O'Flynn after the event.

It was a cruel blow to Coyle, who was competing in her third an  final Olympics and on the verge of a medals place before the jumping began. On the quirks of pentathlon is that riders share their horses. The horses in Tokyo today were  not in cooperative form, making the event very distressing for viewers at home.

She finished the event in 19th place before placing 24th in the end.

“It’s just really upsetting,” she said. “I was coming here to do a lot better. Especially after the fencing I thought I was in with a shout.

“I watched the girl before me not being able to get through the trebles so I knew that it might give me trouble.

“But I thought I might be able to handle it but obviously not. It’s the way I wanted to finish out my career but hopefully in a day or two I can look back on it and be happy with at least coming third in the fencing.”

Coyle had the presence of mind to mention Kellie Harrington and wished her well in her pursuit of gold on Sunday morning.

“I remember my dad saying at my first games that you can train as hard as you want, but you’ll never know with the horse.

It’s a lottery and in the last two games I have been lucky and in the third I’ve been not so lucky. I’ll have to take a bit of time to look back on it now.

I’m really proud to make three games and it’s definitely not how I wanted to end things.

It’s bittersweet because I was so close and then had it snatched away from me.

But I’ll take a bit of time and hopefully watch Kellie [Harrington] go on and win gold, which would be a really nice [way] to see out the games.

I’m thinking have I done my coaches justice today? And I don’t think I did. It’s really disappointing.

I’ve been so lucky with an amazing career. I’ve got to stand on podiums and got to go to three games. There’s lots of rainbows.

Hopefully people can realise that while it’s sad now, there’s definitely good moments in it and it’s worth it. 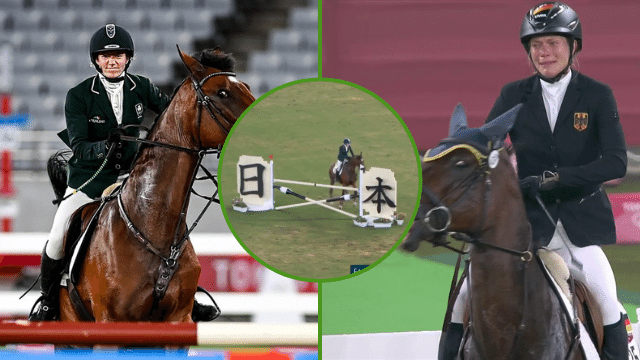 Olympics
2 years ago
By PJ Browne
Natalya Coyle: From 'Not Very Good' To One Of Our Big Olympic Medal Hopes
Previous Next

Olympics
9 months ago
By Eoin Harrington
German Coach Sent Home From Olympics For Punching A Horse
Olympics
9 months ago
By Gary Connaughton
Modern Pentathlon Format Slammed After Rogue Horses Make Farce Of Event
Olympics
2 years ago
By PJ Browne
Natalya Coyle: From 'Not Very Good' To One Of Our Big Olympic Medal Hopes
Popular on Balls
Rugby
2 days ago
By Colman Stanley
'That Pace, That Intensity, That Organisation' All Black Legend Has High Praise For Leinster
GAA
2 days ago
By PJ Browne
Cusack Has Little Sympathy For Gearoid Hegarty After Red Card
Football
17 hours ago
By Colman Stanley
Wagatha Christie Trial Sheds New Light On England's Euro 2016 Disaster
GAA
23 hours ago
By PJ Browne
GAA President Explains Why Tailteann Cup Won't Be All-Ireland Curtain Raiser