Figures Prove Female Jockeys Are Underrated By The Public

They've been in top form of late - winning at Cheltenham, winning at Royal Ascot, even winning jockeys' championships - and yet, it seems, female jockeys continue to be underrated.

The University of Liverpool have carried out a statistical analysis on over 1.6 million rides across an 18-year period, providing fascinating results. The analysis ultimately indicated that a female jockey on a ride at odds of 9/1 has the same chance of winning as a horse, ridden by a male, at odds of 8/1.

The results are all the more interesting coming on the back of an exceptional Cheltenham Festival for the female representatives in the weighing room, the women winning 14.3 per cent of races at the four-day event despite only receiving 9.2 per cent of available rides.

For Bryony Frost and Frodon, The Festival fairytale really did come true…#CheltenhamFestival pic.twitter.com/lPCkPg3Y9E

Rachel Blackmore, Lizzie Kelly and Byrony Frost all won at the Festival in 2019, with Blackmore claiming her first two wins at the meeting. But her exploits didn't stop there as capped off a fine season which saw her challenge Paul Townend for the jockeys' title back in Ireland.

Vanessa Cashmore, author of the research, argued that there appears to be "negative public opinion about the ability of female riders."

This analysis seems to suggest there is a significant difference between the material performance of female Jump jockeys and the public perception of their capability.

I hope this research can move us another step closer to altering attitudes towards female jockeys and more importantly, driving behavioural change

While the research focussed on jumps racing, there has also been recent success for females on the flat racing scene. Last week, Hayley Turney bridged a 32-year-gap by become only the second female ever to ride a winner at Royal Ascot. Gay Kelleway was the first in 1987. 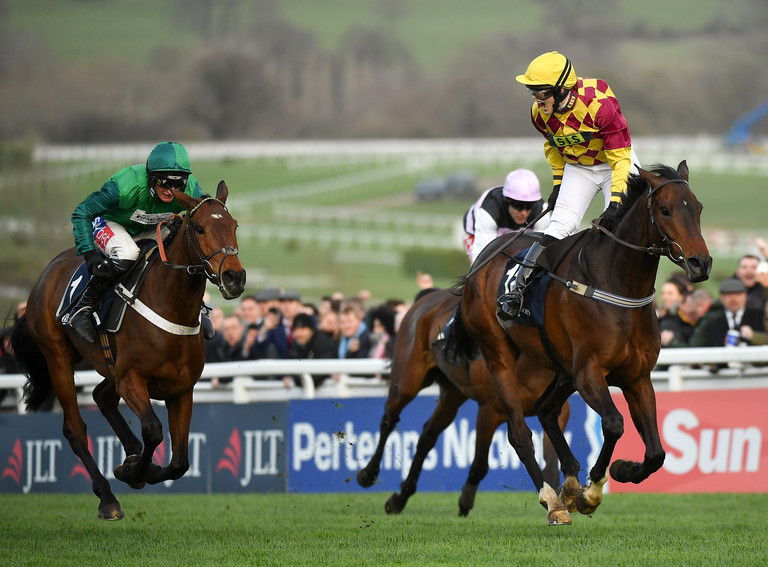 There has been an upward trend since 2014 with 9.5 per cent of all rides on the Flat going to female jockeys in 2018, along with 5.7 per cent over Jumps. That trend, over a five-year period, suggests equality regards the share of rides between male and female jockeys could be approximately 50 years away on the Flat.

Over Jumps, equality is estimated to be approximately a century away.

SEE ALSO: A Trainer, His Horse And Their Celebratory Pints - A True Irish Underdog Story

Horse Racing
6 months ago
By Gary Connaughton
Watch: Rachael Blackmore Pulls Off Miraculous Recovery To Win At Cheltenham
Horse Racing
1 year ago
By Sean Meehan
Watch: Tiger Rolls Back The Years To Win The Glenfarclas At Cheltenham
Horse Racing
1 year ago
By Sean Meehan
Watch: Brilliant Post-Race Interviews As 33/1 Shot Wins The Coral Cup
Popular on Balls
Football
4 hours ago
By Eoin Harrington
Juan Mata Questions Manchester United Management After Dire Season
Golf
2 days ago
By Gary Connaughton
Padraig Harrington Glad He Didn't Have To 'Make A Decision' On Saudi Golf League
Football
1 day ago
By Gary Connaughton
The Frank Lampard Love-In After Everton's Survival Was Downright Bizarre
GAA
2 days ago
By PJ Browne
'It Came At An Awkward Time. I Didn't Think It Would Be So Bad'