The Curious Tale Of Johnny McEntee: A Trickshot Quarterback Enacting The President's Purge

As career trajectories go, Johnny McEntee's has earned its place in the pantheon of oddities. He probably didn't foresee a career for himself as the leader of the free world's personal executioner, especially when he was spraying spirals in front of 40,000 fans at UConn or impressing the online world with his collection of creative trickshots, but it has nevertheless led him to one of the most powerful jobs in the White House.

When he first began making cameos on national media outlets, future ambitions revolved solely around preparing for the NFL Draft, not the re-election of a divisive president amidst the highly-charged environment that is America right now. And yet, here he is, implementing a purge on behalf of Donald Trump, a one-man Gestapo in dystopia.

The duties of individual staff members within the Trump administration can be both vague and questionable at the best of times, subject to a state of continuous uncertainty as the president deals with the inconvenient reality of being held to account. In Andrew Giuliani, for example, once an aspiring professional golfer and the son of former New York mayor and Trump's personal attorney, Rudy Giuliani, the leader of the so-called free world has a liaison person who deals solely with sports teams visiting the White House. It would seem far-fetched however to suggest that auxiliary roles haven't been found to keep him busy as the deluge of rejection letters arrive into the letterbox on Pennsylvania Avenue. Likewise, the exact specifics of McEntee's roles as a body man have been quite short of detail. Until recently, that is.

Multiple reports claim that he has spent the last few months weeding out those within US federal agencies suspected of falling short of unyielding loyalty to the administration, the very least that is expected of them.

That's extraordinary power for the man responsible for a viral clip Bleacher Report once noted as "the greatest piece of media valor that has hit YouTube since the Numa Numa guy."

For those unacquainted with that particular wormhole of the internet, McEntee, then a quarterback with UConn Huskies, performs a series of trickshots ranging from throwing a ball blindfolded at wide receivers to opening an emergency exit door using a football. All together it earned him recognition in the lead-up to the 2013 Draft, particularly among those without an erudite knowledge of college football. He wasn't exactly Heisman material. And so, he ultimately failed to make the NFL grade.

Within an uninspiring class of quarterbacks in that year's draft, where the only one drafted in the first round was EJ Manuel, a player who retired in 2019 after six years in the league, McEntee was deemed surplus to requirements.

Thankfully for the baby-faced pigskin-slinger, bigger plans awaited and, with a communications degree now in his pocket, he readjusted his targets and settled into a new job with Fox News. It didn't last long. Mixing together a combination of itchy feet and a fascination with a entrepreneur-cum-politician, McEntee was cast under the spell of a campaign growing in momentum and, thus, gaining a great deal of traction with the American public.

He bombarded Trump's campaign headquarters with emails until they eventually caved, rewarding his persistence and loyalty with a role in the dark inner circle tasked with concocting one of the greatest political shocks the world has ever seen. Since then he's gone on to become one of only a handful of names that have remained omnipresent within the circle in one form or another, from makeshift cubicles in Trump Tower to the Situation Room right in the heart of the nation's capital.

"When [McEntee] asks other aides for a briefing book or draft of an executive order," revealed Politico in 2017, "people know that it’s a request coming directly from the president."

That stock has only risen since, despite a forced hiatus away from the White House.

It was reported at the time that he had been dismissed by John Kelly, the former Chief of Staff, after security concerns emerged arising from supposed online gambling. McEntee was escorted out of the building, it was widely acknowledged, without even being afforded an opportunity to gather belongings from his office.

Kicked to the curb by a superior, he wasn't left in the dark for long. Trump immediately reassigned his young aide to a role on the re-election campaign and he eventually returned to the White House earlier this year as the paranoid leader's fidis Achates. His new role in the administration makes him among the most powerful beneath Trump; Kelly, in contrast and like so many others since 2016, is no longer around.

Trump was never going to disown the 30-year-old when disloyalty was one charge he couldn't be accused of. So, when the president decided that he was surrounded by "never-Trumpers", as one administration official told Axios in February, McEntee was appointed to lead the Presidential Personnel Office, tasked with conducting a purge of those in any way disloyal.

That same publication revealed this month that McEntee has begun making staffing changes inside federal agencies, without the consent of agency heads, in order to remove those deemed "insufficiently supportive". 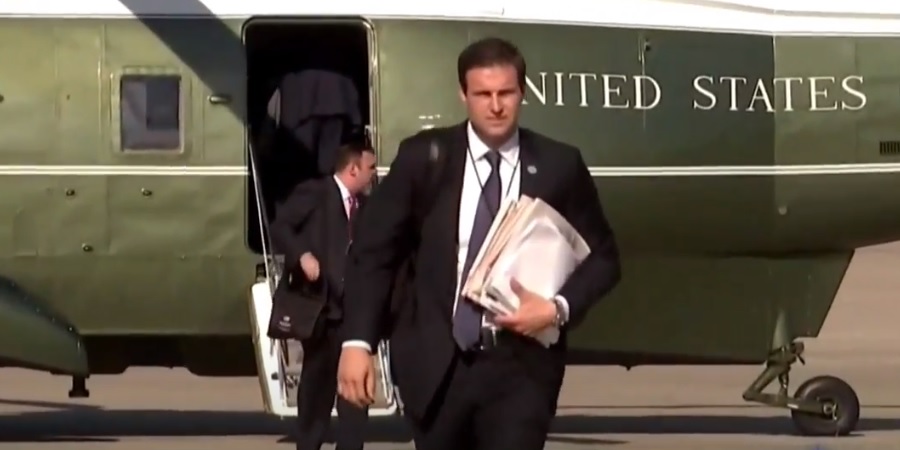 This is exactly what Trump has been craving from his acolytes and, from the growing evidence we have, McEntee is delivering in spades.

In a sign of the unwavering fidelity he expects of candidates wishing to follow in his footsteps, the 30-year-old settled in to his new role by devising a questionnaire to assess the suitability of candidates looking for employment in the White House. This is nothing new. What's striking however is the additional questions he's added to the questionnaire, first reported by CNN, which suggests Brand Trump supersedes the presidential seal.

The initial questions on this updated questionnaire, and presumably the most important in the eyes of the administration, relate to Trump and the never-ceasing campaign.

"What part of Candidate Trump's campaign message most appeals to you and why?" strikes a particularly sinister tone.

The follow-up is equally as sinister: "Have you ever appeared in the media to comment on Candidate Trump, President Trump or other personnel or policies of the Trump Administration?"

In just short of 10 years, McEntee has gone from the grinning quarterback with a quirky viral video to a man pulling strings from deep within the White House. Not only that, he is abetting Trump in converting the self-styled greatest country in the world into something more reminiscent of a banana republic. Against this backdrop the road gradually winds its way towards November 3, the prospect of four more years of petulance and antagonism fanning the flames - both metaphorically and literally. 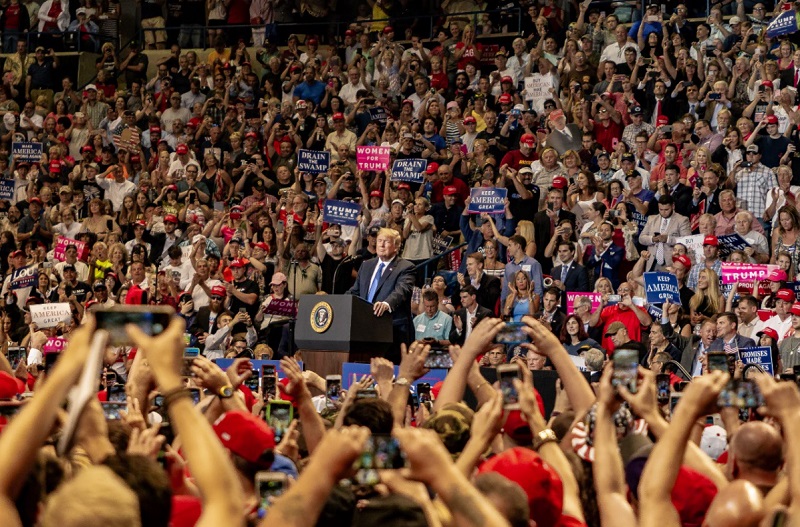 The commander-in-chief has recognised that he needs a playmaker-in-chief and, in McEntee, he sees somebody with requisite skills to plot another path towards victory. Trump has always struggled to find personalities with an infinite allegiance to brand over nation. He's now found one by turning to a familiar face, one that is happy pulling triggers while he lights his fires from the rostrum.

Over the coming months, McEntee will continue to devise and to call and to execute some of the most important plays in the election.

In many ways, just as he did on the gridiron field.

American Sports
1 year ago
By Sean Meehan
WWE Legend Mick Foley Calls On Vince McMahon To Remove Donald Trump From Hall Of Fame
American Sports
1 year ago
By Michael McCarthy
Donald Trump Continues To Target Sport In His Weird Culture War
Popular on Balls
Golf
3 days ago
By Gary Connaughton
Padraig Harrington Glad He Didn't Have To 'Make A Decision' On Saudi Golf League
Rugby
1 day ago
By PJ Browne
The Last Munster Team To Win Silverware: Where Are They Now?
Football
3 days ago
By Gary Connaughton
Darron Gibson Was Often Mocked By United Teammates Over Bobby Charlton Advice
Football
1 day ago
By Gary Connaughton
Paul Merson Feels Liverpool's Season Can't Be A Success If They Don't Win The League