Considering the sport's popularity in this country, it's a bit strange that there haven't been more top darting talents produced in the Republic of Ireland.

Steve Lennon and Willie O'Connor have been on the tour for a number of years, with both men winning their opening round matches at the World Championships yesterday.

However, Keane Barry is the most exciting talent we have at the moment.

The 19-year old Meath native is one of the brightest young prospects around at the moment, winning two youth world championships and making his name on the tour over the last couple of years.

He has now gotten off the mark at Alexandra Palace.

This was Barry's third appearance at PDC World Championships, exiting at the first round in each of the last two years.

There would be no stopping him this time, with the Irishman producing a dramatic 3-2 win over Royden Lam this afternoon.

He played the much better darts overall in the first two sets, including a few big check-outs.

However, Lam would roar back with some excellent play of his own to level the game at 2-2.

Sensational bullseye finish there as Lam ties proceedings at two sets apiece and we're into a decider! pic.twitter.com/Qe1ib8OuzM

Barry managed to power through in the end, but it was the nerviest of finishes.

In the fifth leg of the final set, Lam would have had the darts had he managed to bring it to a deciding game. This resulted in both players losing their nerve somewhat, missing a number of doubles.

In the end, it was Barry that finished the job.

It's a first Ally Pally victory for the 19-year-old Keane Barry as he leads Lam to the slaughter, closing out a 3-2 success!

He will now face Jonny Clayton in the second round, with the Welshman currently ranked eighth in the world rankings and recently won the Premier League.

Quite the test, but it will be some experience for the youngster. 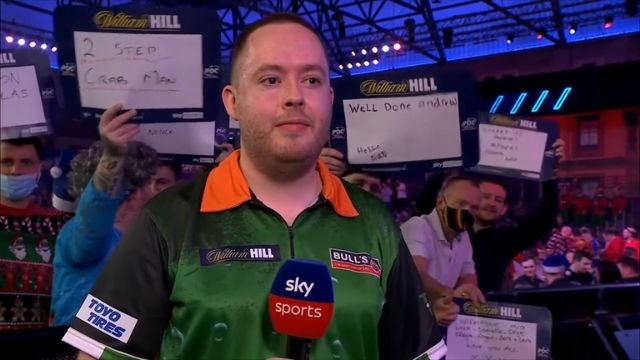 Other Sports
2 months ago
By Eoin Harrington
Joe Cullen Claims Gary Anderson Called Him A "Cheat" During Premier League Bust Up
Other Sports
2 months ago
By PJ Browne
How To Watch UK Open Darts On ITV4 In Ireland
Other Sports
2 months ago
By Gary Connaughton
Gerwyn Price Reveals Dublin Crowd Antics Made Him Question His Future In Darts
Popular on Balls
Football
23 hours ago
By Luke Delaney
Obafemi In As Stephen Kenny Names 27-Man Nations League Squad
GAA
2 days ago
By PJ Browne
How A Kerry Guard Ended Up Playing For The Tipperary Footballers
Football
21 hours ago
By PJ Browne
Five Things Learned From Stephen Kenny's Nations League Press Conference
Motorsport
1 day ago
By Eoin Harrington
F1: New Team Radio Clips Show Sergio Perez Frustration With Team Orders In Barcelona