Martina The Session Moth (real name, Karen Glennon), has taken the world of professional wrestling by storm, and yes that's "the world", not just our Irish shores.

She's the unofficial face of upstart Irish promotion, Over The Top (OTT) Wrestling, which in itself is one of Dublin's must do nights out nowadays. They sold out the National Stadium three times last year and have had some of their competitors featured by WWE during their UK Title Tournament 12 months ago.

From a chance encounter with a trainee wrestler's sister, while in the line to meet WWE Superstar Chris Jericho back in 2011, to making her debut just six months after beginning her training, Glennon was taken into the world of wrestling almost in a whirlwind.

I was a lot heavier when I was younger so it never really crossed my mind to actually wrestle. You're looking at all these girls that are on TV that are in great shape and stuff. I found the Mainstage Wrestling Facebook page and just thought 'Oh maybe I could go down and train to be a referee!

It was at Mainstage Wrestling's training school where she met Joe Cabray, who started OTT after getting his release from WWE back in 2014 and the rest is, as they say, history. Well, Irish wrestling history anyway! 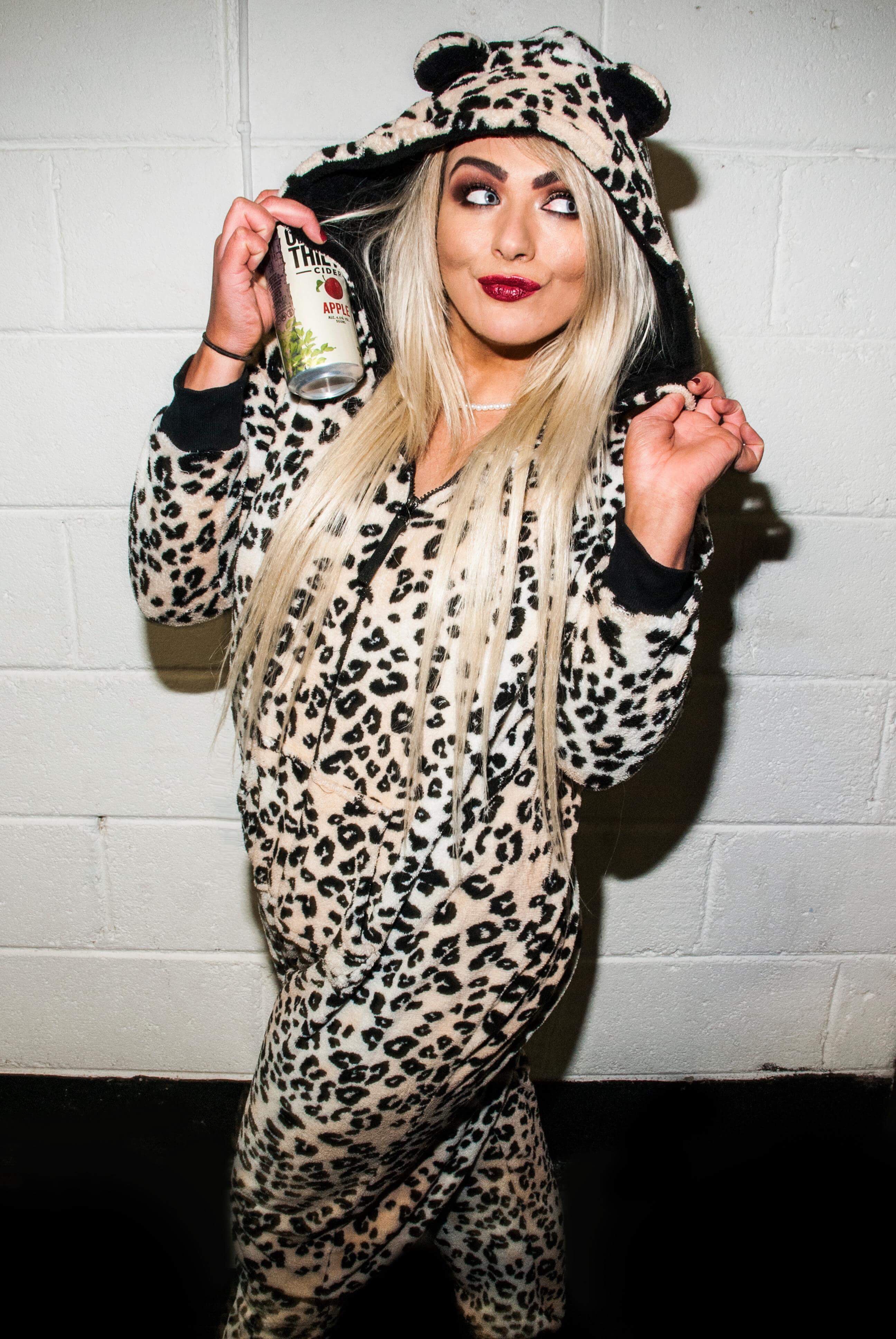 As well as being the first ever OTT Women's Champion, Martina the Session Moth has the honour of calling herself the new Gender Neutral Wrestling Champion, perhaps following in the footsteps of Andy Kaufman and his infamous Intergender Wrestling Championship. Karen explained to me that she's no stranger to facing men in the ring.

There's a reason why I've had a lot of Intergender matches, because in Mainstage I was the only girl training. Obviously they wanna have a female on the show, so they're gonna just put me in there with some of the guys I'm training with.

It's an area that brings with it some strange quirks, to say the least. Namely the apparent existence of an online fetish culture where browsers love to watch women beating up men. One video of her facing Waterford wrestler, Darren "Xavier" Burns, has reached over 700,000 views on YouTube.

[Laughs] I'm not surprised. The amount of messages you get just as a female wrestler, that's a whole different story! You definitely get the odd weird message off of fans.

The "odd weird message off of fans" aside, the woman behind the Session Moth doesn't feel that wrestling is in danger of heading down the same route as Hollywood with seedy scandals about to break.

I'd like to think wrestling can stay positive. I've always had fantastic experiences. I could never say a bad word about any of the boys. But I can only speak for myself, obviously.

Karen has been wrestling since 2011, her original persona being "Kazza G", nothing too left of centre of the atypical women's wrestling. It was from the inception of "Martina The Session Moth" that her career has skyrocketed. She is booked every weekend across the major UK and European promotions where the wrestling business is legitimately booming. 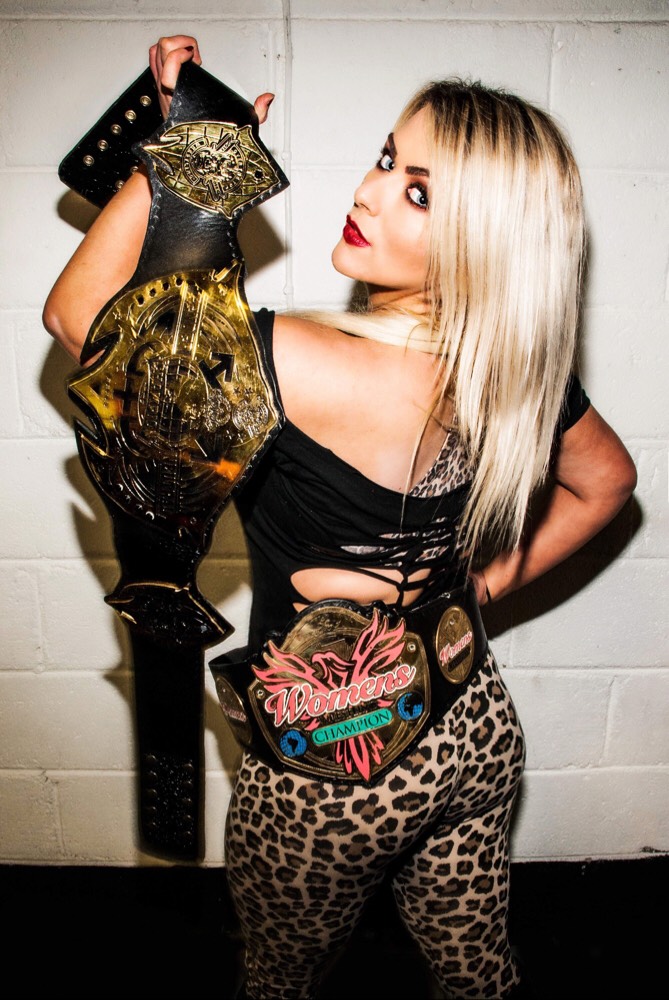 It was the lukewarm, at best, response to her first appearance in OTT as Kazza that left her walking away wanting to do "something special".  A trip to Penny's for some leopard print pyjamas and a union with OTT comedy tag team "The Lads From The Flats" (a team that is exactly what it says on the tin), gave birth to the Session Moth.

Session Moth; it's so Irish we all understand it and we get it and it's different, and for girls as well it's not just another girl in tights, it's something COMPLETELY different. She's a complete character.

When I first saw her perform as the character myself, I fell into the same trap that apparently a lot of people did, the worry about "will this travel?" The success of the Session Moth in places like ICW in Scotland and wXw in Germany, proved all those worries needless.

Just because they don't know what a 'session moth' is in every country, in every country there is girls like that. So then in England they would just say to me, 'oh so, she's like a chav?', in Germany they get it too they're like 'oh she's a party girl, she likes beer, we love beer!'

Glennon is a fantastic self promoter as well, a master of staying fresh and spoken about in a business that is just as influenced by fast moving social media as any other. The popularity of her latest hashtag, #fanciesmartina, led to a fellow wrestler texting her to ask "how the hell do you stay so relevant all the time!?" 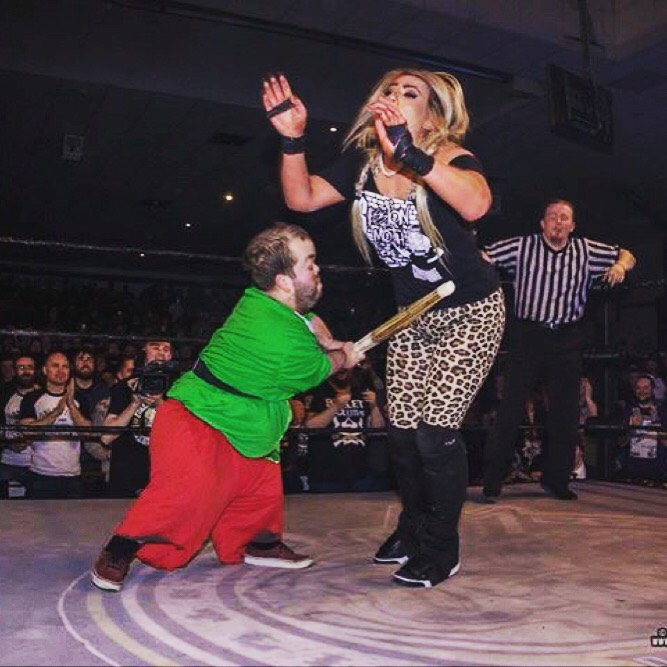 It was through her social media self promotion that she was contacted by Irish WWE Superstar, Becky Lynch. Bray native Lynch reached out on Instagram to compliment Karen as a performer.

Becky messaged me after liking everything I put up on Instagram and just said 'I've been watching you, you're doing really, really well, would you ever think about coming here?"

Naturally that leads me to my final question, will we see Martina The Session Moth in a WWE ring next?

I see a lot of people on Twitter discuss it and I'm not oblivious to the fact that they [WWE] probably know who I am and have seen some of my stuff. I wouldn't rule out the fact that I think that I might have a chance at it but, again it's not even something I know I want to do, I have a lot of stuff planned for this year that's quite big.

If you want to see Martina The Session Moth perform in the flesh, grab your glow sticks for when her entrance music (the very apt "Maniac 2000) plays and get yourself down to the next OTT show she's on. That's if you can get a ticket, it's one of the hottest events in Dublin at the moment!

Olympics
1 hour ago
By John Dodge
Rory McIlroy and Shane Lowry Put Themselves In The Medals Reckoning Today
Olympics
2 hours ago
By Michael McCarthy
After 11 Olympic Games, George Hamilton Finally Had His Irish Golden Moment
Olympics
5 hours ago
By John Dodge
From Struggles In London To Gold In Tokyo: History Of Irish Rowing At The Olympics
Previous Next