Other Sports
Jan 7, 2022
By Gary Connaughton

This year's World Championship will live long in the memory of darts fans. There were some unbelievable matches over the two weeks at Ally Pally, with no shortage of drama for the viewers.

We had nine darters, sudden death legs, and a ridiculously high standard of play. It was all capped off with an enthralling final between Peter Wright and Michael Smith, with the Scot ultimately going on to claim his second world title.

Despite all of the fantastic elements of this year's event, there was one downside. A handful of players, including three-time world champion Michael van Gerwen, had to withdraw from the tournament after testing positive for covid-19. The Dutchman certainly would have been in the mix to claim another Sid Waddell trophy had he been available to compete.

It has been reported that van Gerwen likely contracted the virus after visiting his manager's house on Christmas Day, with fellow player Vincent van der Voort having also tested positive after being present on that occasion.

As a result, Peter Wright does not seem to have too much sympathy for his rival.

Speaking on Sky Sports' The Darts Show podcast, Wright said van Gerwen should have considered staying in his hotel room in order to avoid contracting the virus and this was something he would learn from in the future.

It was down to the players themselves.

Obviously, it's very difficult for Michael because he couldn't go home. He likes to go out and eat well, but maybe he should have just stayed in his hotel room and got stuff delivered, instead of going out, and that's cost him the tournament...

No disrespect to the hotel or the PDC, but you don't know if they close the actual hotel down completely just for the players.

By the sounds of it, they had the general public coming in there, you don't know about the staff - are they being tested and stuff like that. It's the worst place to be, in London, with the virus, it's just going to come in and out the door, isn't it?

Every morning testing yourself, you're just thinking 'please don't show up positive', and obviously we kept ourselves safe and just away from everyone.

Maybe he (Van Gerwen) will look at what we did this year for next year.

Wright and van Gerwen have had some brilliant battles down through the years and you can be certain that the 32-year old is already plotting on wrestling back the title in 2023.

As for the current champion, he said he hopes to win up to five world titles before retiring from the sport in years to come.

SEE ALSO: Why All The Darts Players Are Drinking Ballygowan 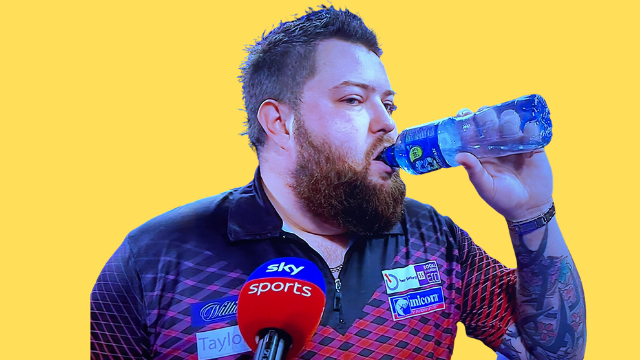