Phil Taylor is the greatest players to ever pick up a set of darts. His record speaks for itself, with his tally of 16 World Championships unlikely to ever be bettered.

It's also fair to say that he was somewhat of a prickly character.

There was numerous examples of 'The Power' falling out with fellow pros down through the years, often on stage. He also had long standing feuds with a number of people in the sport.

In short, he had no problems letting his feelings be known. The World Championships back in 2017 provided a prime example.

Taylor was just after completing a 4-2victory over Kim Huybrechts in the third round of the tournament when he made his way up to the Sky Sports studio.

Wayne Mardle would go on to ask him why he struggled in the previous round against Kevin Painter despite winning 4-0 on that occasion, a question Taylor did not take well.

Mardle: I'm going to point out any negatives, but I will anyway. You played great against David Platt, you looked in control. Against Kev (Kevin Painter) the composure had gone but tonight it was back again. What was the difference with Kev?

Mardle: Yeah but you seemed so settled in one game and less settled in another.

Taylor: Kevin is hard work. He talks a lot and does whatever Kevin does, you know what he does. I'm not going to dwell on it. Kevin Painter is Kevin Painter. He's hard work and a hard player to play.

Mardle: But tonight there wasn't any point where you looked like...

Taylor: Of all people you should not ask me a question like that. You're going to put me in the shit. I'm going to say that because you have. You know what Kevin Painter is like.

You've asked me a question and I'm going to answer it.

Mardle: Your composure was good in the first game, it was gone in the second game, and in the third one it was back.

Mardle: But normally that wouldn't put you off. Why did he put you off easier?

Taylor and Mardle had a few run-ins during their playing days, with the latter famously producing a brilliant comeback to win their World Championships quarter-final meeting back in 2007.

As every darts fan will tell you, it's never any harm to have a bit of bite in the sport. 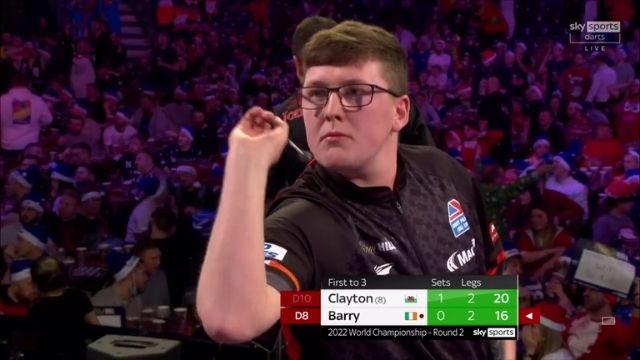 Other Sports
1 month ago
By Eoin Harrington
Joe Cullen Claims Gary Anderson Called Him A "Cheat" During Premier League Bust Up
Other Sports
2 months ago
By PJ Browne
How To Watch UK Open Darts On ITV4 In Ireland
Other Sports
2 months ago
By Gary Connaughton
Gerwyn Price Reveals Dublin Crowd Antics Made Him Question His Future In Darts
Popular on Balls
Rugby
2 days ago
By Colman Stanley
'That Pace, That Intensity, That Organisation' All Black Legend Has High Praise For Leinster
GAA
2 days ago
By PJ Browne
Cusack Has Little Sympathy For Gearoid Hegarty After Red Card
Football
15 hours ago
By Colman Stanley
Wagatha Christie Trial Sheds New Light On England's Euro 2016 Disaster
GAA
21 hours ago
By PJ Browne
GAA President Explains Why Tailteann Cup Won't Be All-Ireland Curtain Raiser