When it comes to Irish athletes breaking new ground, Brendan Doyle is a sportsman who is doing that, and more.

The 26-year-old, who hails from Dublin, is one of the few Irish athletes that will be looking to compete at the 2022 Winter Olympics in Beijing.

Beset by funding issues, Doyle has proven that he can overcome a lot in a short space of time, no matter the scale of the challenge.

While also being a skeleton athlete, he is also a mental health advocate, and he is hoping that he can use his story to turn other lives around.

Speaking to RTE, Doyle shared his inspiring story as he looks to continue on the path of his Olympic dream.

"For me, I love the combination of being this super-strong powerful athlete and being completely zen on the sled.

"You're dancing with the sled, moving around corners. I love that conflicting personality that you have to be."

"I am a buachaill from Dublin. I shouldn't be punching above my weight like I am"
Meet the Irish athlete who is battling against the odds to qualify in skeleton for the Winter Olympics #Beijing2022 🛷
(Tap for best view on mobile) pic.twitter.com/BeBLmGrpj5

Doyle, however, has had to bide his time to get to this level of competition.

Formerly a Garda, the potential Irish Olympian was involved in an incident that brought him down the darkest of dark paths while on duty.

"I was unfortunately involved in an incident during a domestic dispute where I was attacked at knifepoint. I was injured, cut on my hands. The ligaments and nerves in my thumb were moved and severed.

"The physical side was something that I could deal with. But it was more the mental side which took me down a road that I wasn't expecting.

"I was having night terrors, I wasn't sleeping and insomnia was a massive thing. It took a massive toll on my life, and things just started unravelling. It got harder and harder to get through any day.

It got to the stage where I was driving through the night to Cork and back as opposed to what I thought was the prison cell of my bedroom. It went to the point where I thought my only option was to end my life.

I have proven it to myself that despite all my struggles, and what I have went through, I convinced myself that the only option I had was to end my life. And now I am competing in a sport with the world's elite that has no support or infrastructure.

I'm a buachaill from Dublin. I shouldn't be punching above my weight like I am, but I have a drive and passion for it. There is a part of me that is proving it to myself that I can do it.

While also looking qualify for the Olympics, Doyle must find the funding required to bring him there.

Granted, he has received a solidarity payment to help him on his journey, but that alone is not enough.

"My trajectory is there, all the performance indicators are there, just the finance isn't and that's the bottleneck right now," he said. "I'm ready to go today, but I just can't.

There's nothing special about me. If someone like me who felt like there was no hope to then go on and do this all himself, anyone can do it. 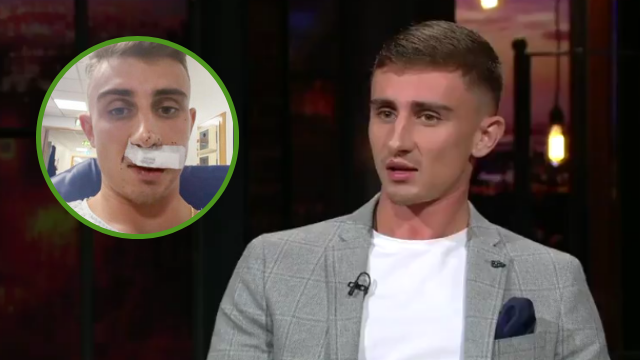