Many a kid born in the late 1980s spent their January days glued to the TV watching the Embassy World Darts Championship under the mistaken impression that they were watching the world's best darts players.

One Saturday afternoon around 1999, a member of the Balls team was milling around his cousin's house. His cousins had recently purchased Sky Sports. To his surprise, a darts match was being televised at an unseasonal time of the year, aka, not January. To his even greater surprise, he could see that Barneveld, the reigning back-to-back Embassy world darts champion, was getting eaten alive.

Who's this guy Taylor who was wiping the floor with the world champion?

It transpired that this man Taylor had been cleaning up in a separate and reputedly far superior world championship routinely, one that could only be watched by those in possession of Sky boxes or regular pub-goers. What had he been watching all these years?

Professional darts split in two in 1993 when the game's top players revolted against the rule of authoritarian darts administrator Olly Croft OBE.

Darts hit the big-time in the 1980s. BBC and ITV screened a number of tournaments throughout the season. It was even giddily suggested that darts was even rivalling football as Britain's favourite TV sport. Men like Eric Bristow and Jocky Wilson became famous. They were interviewed on Wogan and tales of their exploits decorated the tabloids. It was the latter which would prove the game's undoing.

The TV companies grew leery about the in-match pint drinking of the combatants. The Money programme documentary suggests that TV's wariness may have been driven, in part, by snobbishness.

Sponsors fled the sport. Live TV coverage of darts reached its peak in 1983 but soon both the BBC and ITV began ridding their schedules of darts tournaments.

By 1989, there was only one televised event, the Embassy World Championship at the Lakeside. This was unacceptable to the top players, all of whom had given up jobs to play professionally. They found themselves strapped as a result.

Croft was approached by PR experts keen to re-brand the game and make it more attractive to television heads. They were rebuffed. Croft remained hostile to any offer, no matter how constructive, that might see him lose control of the sport. Marcus Robertson, the PR executive featured on the BBC doc, was spurned by the Croft family partly on account of his excessive poshness.

In despair, the top 16 players in the world, including Eric Bristow, Phil Taylor, John Lowe, Dennis Priestley and Keith Deller, banded together and founded the World Darts Council (WDC) in January 1992.

The WDC (essentially the forerunner of the PDC) held its first televised tournament in Norwich in October 1992. We say televised - it was only screened on Anglia Television in the English south-east. The competition was sponsored by car manufacturers 'Lada' and was called the Lada classic.

The 1993 World Darts Championship was the last time all players competed under a unified professional world championship.

But the top professionals were fed up. They were intent on wearing a 'WDC' badge at the event. Their number included every previous world champion. The idea was to remind the world that there was an alternative darts body to the BDO.

Croft clamped down on the idea. He said it was 'advertising' and thus banned. The badges would not be appearing on television. The players were seething.

Dan Waddell, son of the late Sid, wrote somewhat bombastically that the 1993 World  Darts Championship was "darts equivalent of Gettysburg, Orgreave, and the St. Scholastica Day Riot all rolled into one."

After lengthy talks with the BBC, and the BDO, a compromise was reached. The rebel players decided to remove their badges and save their energies for the battles to come. But the redoubtable Tommy Cox, manager of Jocky Wilson, and Bristow's manager Dick Allix, both directors of the WDC, and the players had finally had enough: that would be the last time they would let the BDO order them around.

Shortly afterwards, in early 1993, the world's top 16 players held a press conference in the Rose & Thistle pub in Frimley (as suitable a venue as any for a darts revolution) and announced that if Croft failed to recognise the WDC, they would boycott the next world championship.

They hoped this would force Croft to compromise with the WDC. Not only did the BDO and their delegates not cave into the boycott, they moved to ban the rebels from all BDO sponsored events.

Every world champion, up until that point, was banned from all BDO events. They were prevented from playing county darts.

Soon afterwards, the World Darts Federation, on which Olly Croft was similarly powerful, did likewise.

The USA was the only nation that refused to enforce the ban on the rebels.The court cases followed.

The BDO's surprisingly confrontational stance could have broken the WDC. The rebels had been a tight-knit unit. But a couple began to waver in the face of BDO threats.

Chris Johns and Mike Gregory (1992 Embassy finalist) broke their pact with the rebels and returned to Croft and the BDO. They have not been forgiven by their fellow rebels. To this day, Bristow says he won't speak to Gregory. Neither, incidentally, profited on their return to the BDO, though Gregory did win the odd tournament.

The World Darts Council enjoyed its first proper breakthrough in the summer of 1993, when Sky Sports offered to screen their inaugural world championship. It was cheekily decided that this would run from St. Stephen's Day (Boxing Day) 1993 until the 2nd January 1994. Essentially, just before the BDO began. Skol lager would sponsor the event. It was held at the Circus Tavern in Essex, where it would remain until 2007.

The tournament consisted of the fourteen of the sixteen rebels  (Gregory and Johns were no longer 'rebels') plus two English players Graeme Stoddart and Kevin Burrows, who Dan Waddell described as "brave enough to defy the threats of the BDO".

The field was further padded out by seven Americans and an Irish player called Tom Kirby. The early WDC world championships were run on a group stage followed by a knockout format.

Kirby, the first Irishman to join the WDC, won group 7 and reached the quarter-finals. Kirby joined the rebels at a time when they were grateful for members. After his death in Dublin in 2008, the Irish Matchplay was renamed in his honour.

Denis Priestley won the first ever WDC/PDC world championship thrashing Phil Taylor 6-1 in the final on 2 January 1994. He thus became the first player to win both the BDO and the PDC world titles. He smashed Eric Bristow 6-0 in the 1991 Embassy Final.

Later that month, the BDO world championship, hitherto for known simply as 'The World Championship', began at the Lakeside, devoid of its biggest stars.

The 1994 Embassy was a strange affair. We went and we had our fun but the darts had palled, like being at a party after all the beautiful people had left (perhaps the only time Eric et al might be referred to as the beautiful people). The last remaining 80s great Bobby George, did what he could to inject colour, and his run to the final offered a satisfying narrative arc. The winner, John Part, would go on to prove himself a worthy world champion and a great of the game, but at the time it had the feel of the 1980 Moscow Olympics after the US boycott or Test cricket during (Kerry) Packer's world series: the best players and the most enthralling characters weren't there, so the whole event felt hollow and fraudulent.

Even post-the split, it's not true to say that the BDO World championship was a worthless event. That so many of the top BDO players in the late 90s went on to achieve great success in the PDC is proof of that. John Part won the first Lakeside world championship after the split in 1994.

In recent years, the BDO has grown more and more irrelevant. Even players who were still signed up to the BDO around the turn of the century now castigate the tournament as "car-crash television" featuring "darts of poor quality".

Witness Barry Hearn's previous attempts to take over the BDO and rebrand it explicitly as a feeder event for the 'real' world championship. 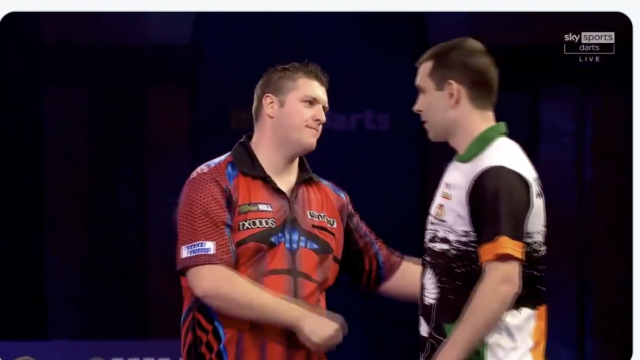