It's fair to say that the majority of people felt that Manchester United had their fair share of luck during the 1-0 at home to West Brom on Saturday.

The away side were awarded a penalty in the game, only for the referee to overturn the decision after reviewing it on the pitch-side monitor. It seemed an odd decision, with Bruno Fernandes clearly making contact with Conor Gallagher.

They would have another slice of luck when Fernandes missed a penalty later in the game, with a retake ordered after goalkeeper Sam Johnstone was adjudged to have come off his line. In fairness, there was no debating that decision.

However, it has been said that United were very fortunate to get away with the first penalty decision. Even Ole Gunnar Solskjaer admitted that his side had a slice of luck.

Despite this, former Premier League referee felt it was not a penalty. Appearing on Sky Sports, he said that Fernandes' challenge was not a foul.

I think not. If you look Fernandes gets the ball. There was contact no doubt, but i don't think it was contact that would put Conor Gallagher down like that.

This is the difficulty in defining is it a clear or obvious error, yes or no? It's very difficult to say to a guy 'give a penalty' when you're convinced in your mind that it's not.

We're not so sure about that. Either are the majority of people, with Sky Sports' viewer poll at the bottom of the screen showing that a huge majority felt that it should have been a penalty for West Brom. 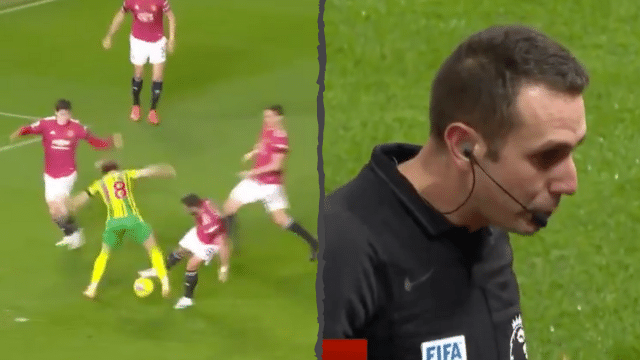