Shane Duffy made a triumphant return to the Amex Stadium on Saturday, with Brighton fans voting him their man of the match from their opening Premier League game against Burnley.

Duffy made his first Premier League start since June 2020 in the game at Turf Moor, and it was a huge performance that he put in, as Brighton got their campaign off to a winning start.

Duffy had a tough year last year on loan at Celtic, and ultimately left the Scottish giants early and returned to Brighton after picking up a season-ending injury.

But the Derry man made a massive return to the south coast on Saturday afternoon, with a performance that not only saw him take the club's man of the match award, but also brought praise from his manager and plenty of the Brighton fanbase.

You've voted @ShaneDuffy as @AmexUK Man of the Match! Great to have him back. 🇮🇪 pic.twitter.com/vxAcXYYMOc

The win at Burnley was a hard fought one, with two goals in the last 20 minutes from Neil Maupay and Alexis McAllister sealing a comeback 2-1 win. Manager Graham Potter reserved some special words of praise for Irish defender Duffy in the aftermath of the game.

I thought he was immense. He has been fantastic since he came back. His attitude and professionalism, his approach to the team and group. He has been really good.

The news of Duffy's successful return to the Seagulls will be music to the ears of Stephen Kenny, whose Irish team take on European titans Portugal in a crucial World Cup qualifier on September 1st. The attacking talent on show for Portugal will take plenty of defensive effort to repel, so Duffy could well play a crucial role on the Algarve.

Duffy himself took to social media to praise the team's performance.

What a feeling being back out there for this team 😍 great 3 points on the road well done lads 💪🏻 https://t.co/Qy56CHezY7

The return to form of Shane Duffy will be music to the ears of Brighton and Ireland fans alike, and bodes well for a strong season at the Amex.

SEE ALSO: Tommy Bowe Has The Perfect Response To Leeds United Getting Hammered 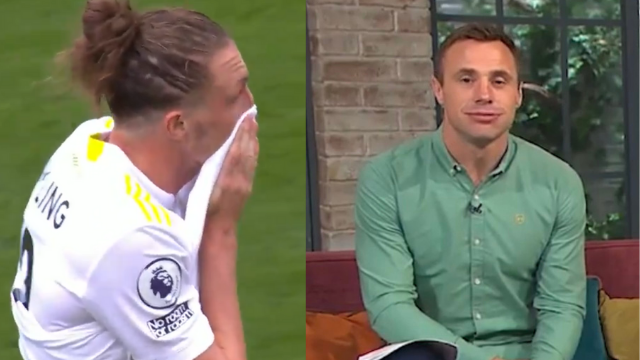 Premier League
5 months ago
By PJ Browne
'He’s Very Self-Critical. Sometimes A Bit Too Much'

Premier League
5 months ago
By PJ Browne
'He’s Very Self-Critical. Sometimes A Bit Too Much'
Popular on Balls
Football
17 hours ago
By Eoin Harrington
Watch: Caoimhín Kelleher Penalty Save Helps Liverpool Through To EFL Cup Fourth Round
Football
20 hours ago
By Jonathan Byrne
The Battle Of Old Trafford: Roy Keane On Why Arsenal 'Crossed That Line'
Football
21 hours ago
By Andrew Dempsey
Shay Given Reveals 'Horrendous' Contract Offer That Forced His Celtic Departure