While Ole Gunnar Solskajer will have been delighted to leave Brighton with three points, there's no denying that the win was a smash and grab job as the hosts hit the woodwork five times in an absorbing match.

For context, no team has hit the bar and posts that much in a single Premier League game since stats records began in 2003-04.

In doing so, Belgian attacker Leandro Trossard is the first player to hit the woodwork three times in a Premier League match since Cristiano Ronaldo vs Newcastle United in October 2006.

Last season, United boasted an impressive defensive record having only conceded 36 times in the league. However, the worrying defensive performance at the Amex follows their 3-1 defeat at home to Crystal Palace on the opening day of the season.

Granted, a distorted pre-season schedule has limited the amount of training that players can do, but there's no denying that right now, United look ragged defensively.

Speaking on Match of the Day, pundits Alan Shearer and Micah Richards highlighted just how much space United are allowing opposite players. Aside from this, the lack of organisation, positional sense, and pressing is alarming.

"Poor finishing has cost them (Brighton) because there’s no way that they deserved to lose that game," said Shearer.

He adds: "There were positives from Man Utd’s point of view - the way they showed great character in coming back and  Rashford’s goal - but Brighton ran them ragged defensively at times. The space that United allowed Brighton was incredible, look at the space that Trossard has got there. That is unlucky because it’s a brilliant effort."

Trossard hits the post with an effort when he receives the ball.

Trossard would turn and shoot here, hitting the outside of the other post.

"This is how easy it was to get in behind them, a long ball in behind - I think this is a penalty with Connolly - but it was far too easy at times for Brighton."

After originally awarding the penalty, VAR official Simon Hooper advised on-field referee Chris Kavanagh that Aaron Connolly had initiated contact with Paul Pogba after a penalty was awarded against the Manchester United midfielder.

At this point, Micah Richards took over the analysis and showed a plethora of second-half moments when United awarded far too much space for the hosts.

Solly March hits the post following this move below. 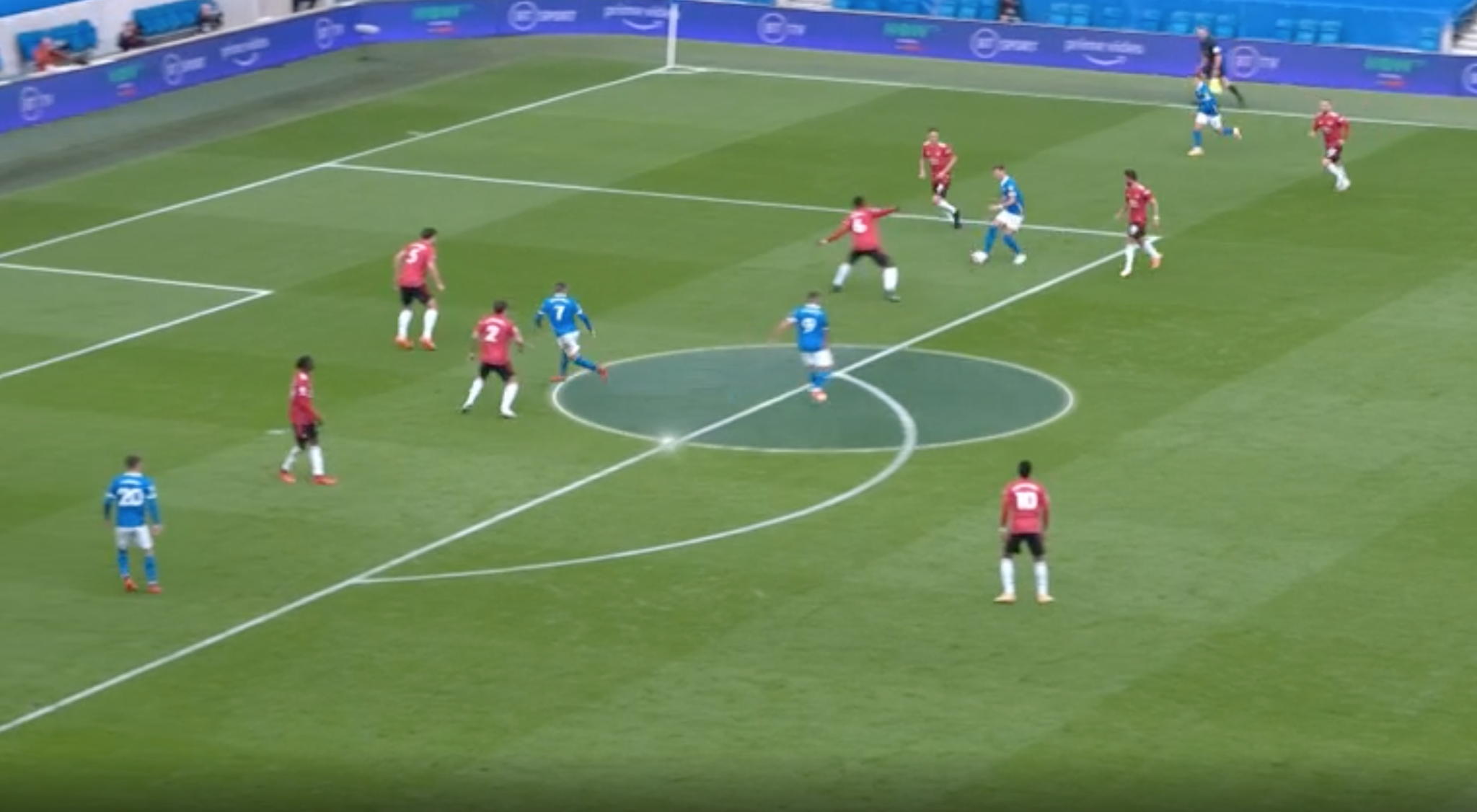 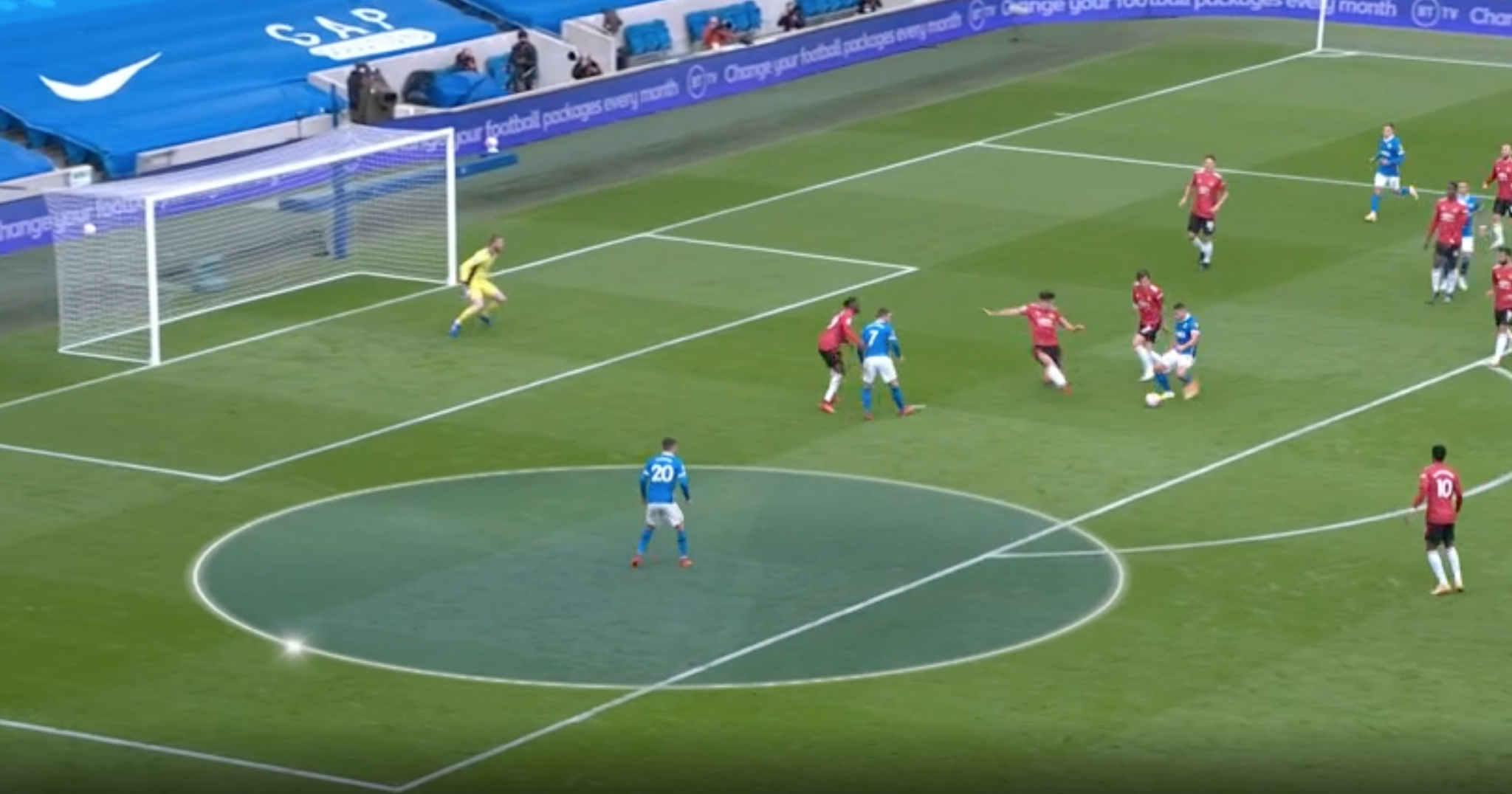 With Ben White, Tariq Lamptey, and Solly March marauding down the flanks, it's no surprise to learn that Brighton drew level because united had plenty of warnings.

"On another day, Trossard’s shot goes in. Look at the space on this right-hand side, Wan Bissaka got himself in awkward positions because he didn’t know where to come or go."

The Belgian rattles the bar here. 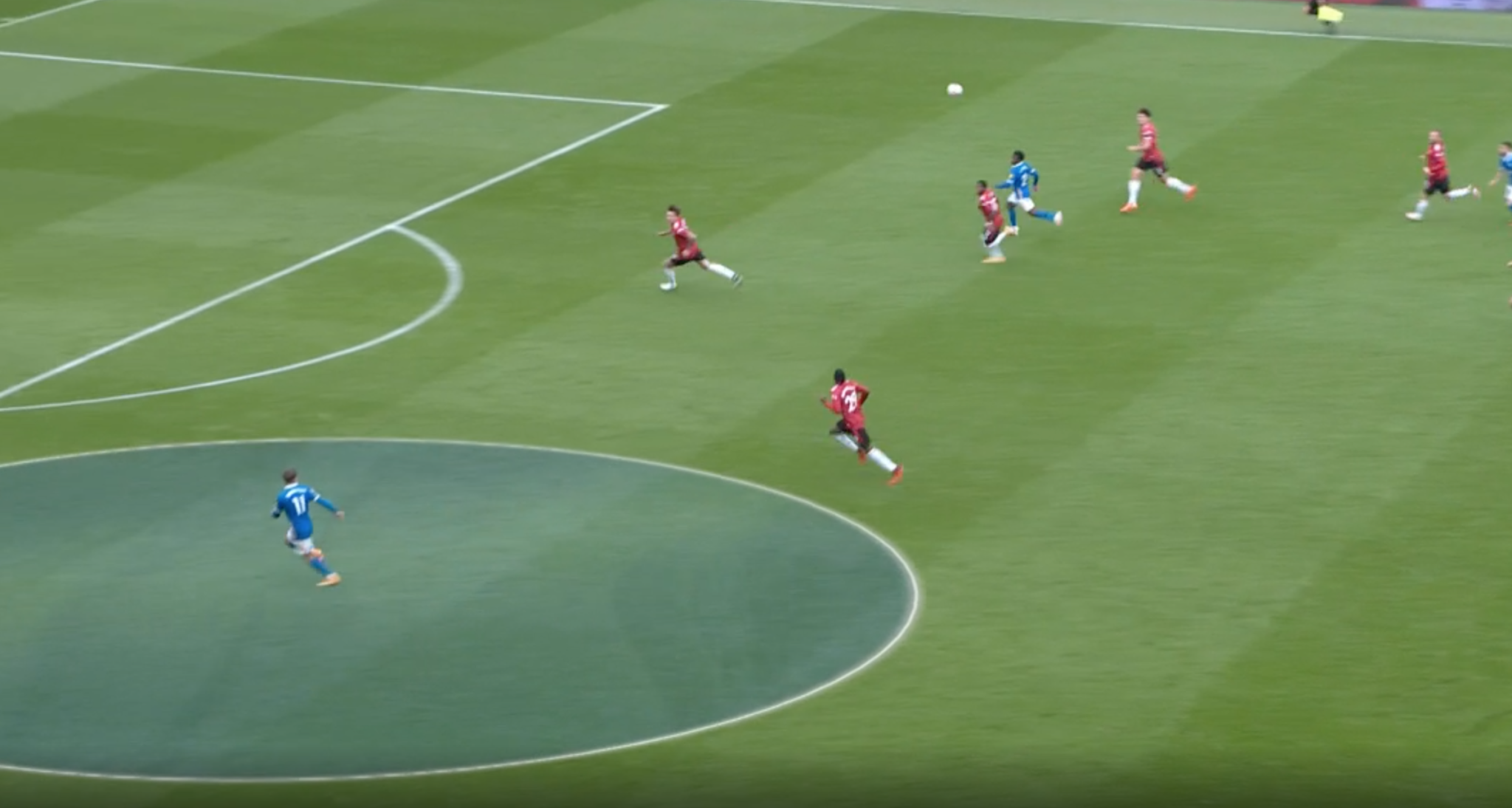 "Look at his (Wan Bissaka's) position here - but he didn’t get help from his wingers. Fernandes doesn’t track him, Wan-Bissaka isn’t looking and they get a deserved goal in the 95th minute.

Prior to Brighton's goal, David De Gea had to make a vital stop from Trossard following this move. 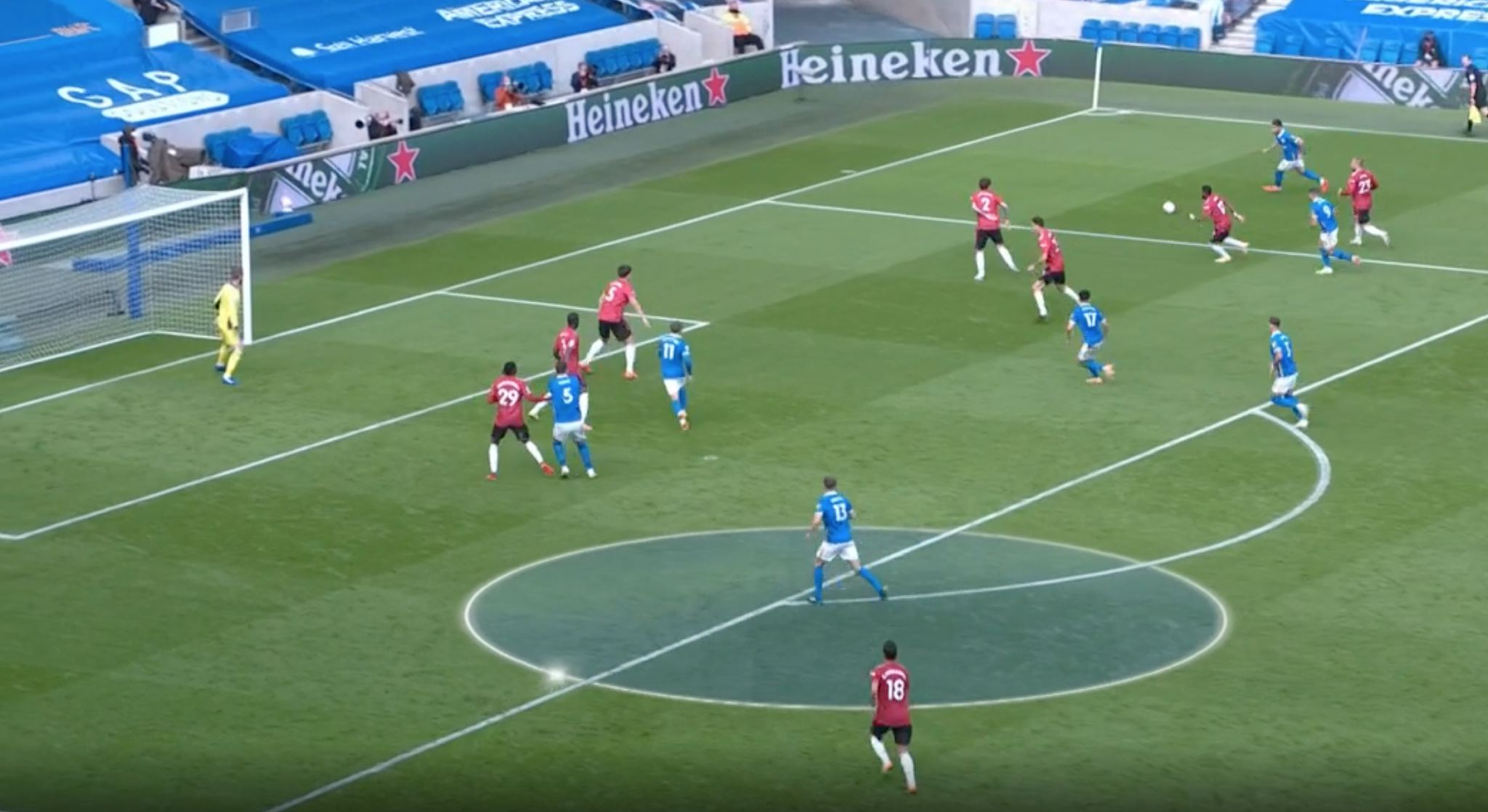 Here's the build-up to the second goal that Brighton scored. 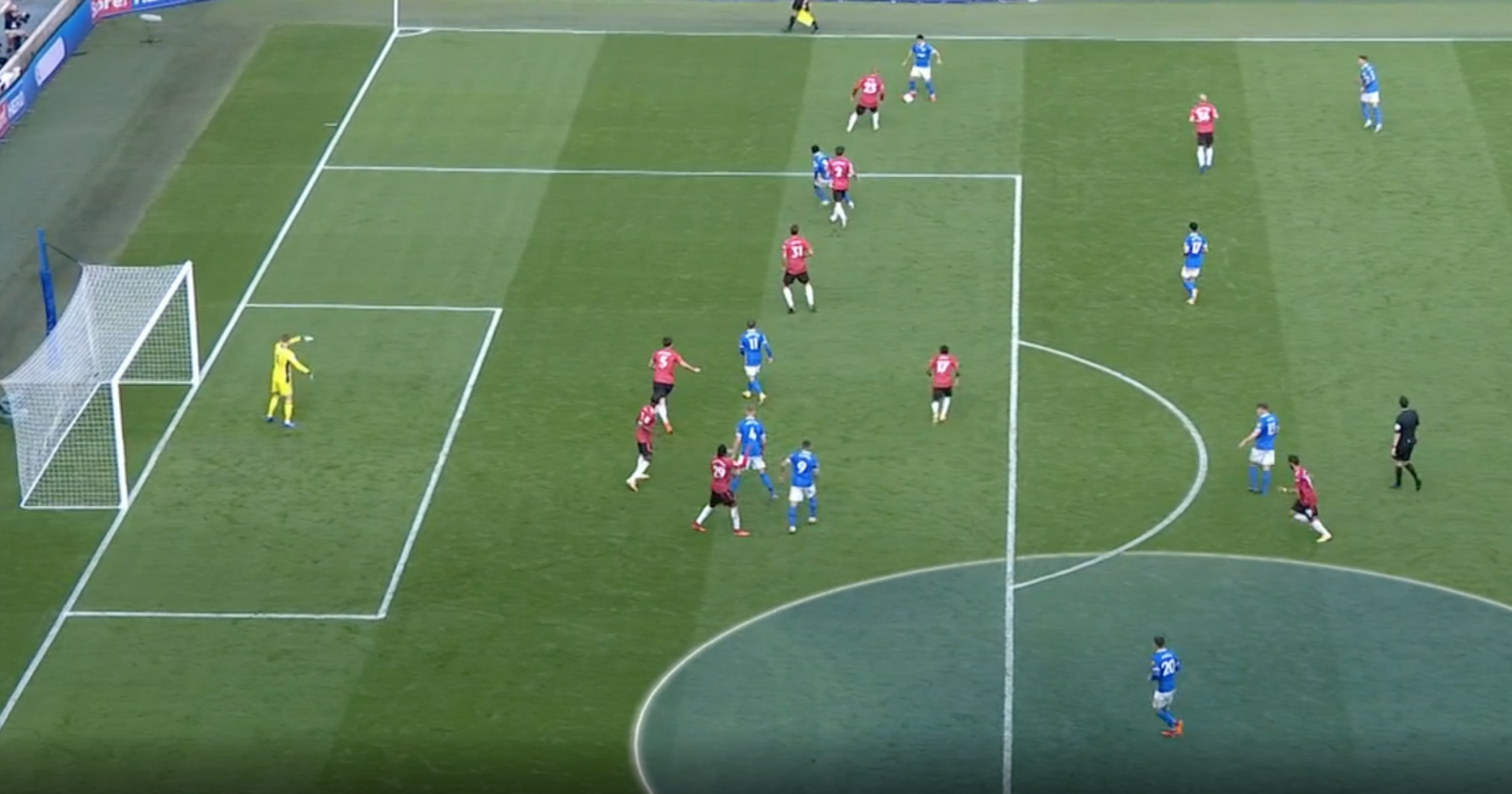 SEE ALSO: Incredible Stat About Paul Pogba Shows Just How Poor He Was Against Brighton