Seamus Coleman has got his mojo back. The Donegal man has been the in-form Irish player of the young Premier League season.

Few expected to see Everton second in the table after three weeks, with three wins from three. Coleman has been their talisman. He was magnificent on Saturday, muting the blistering form of Wilfried Zaha while proving lethal up the right flank. It was like watching the 2013 Coleman as he set up Dominic Calvert-Lewin’s opening goal - the deft touch from a cross-field pass, the perfectly-timed run into the penalty box, the pin-point pass to Calvert-Lewin.

Seamus Coleman doesnt get enough recognition. The guy has been revived since Carlo has come in and been outstanding week in week out. Fantastic to see 💙🔵

Spare a thought for Seamus Coleman who's now gone 3 full weeks without having to issue a rallying cry. Love him really. pic.twitter.com/qdmjr0MGVH

You imagine Coleman would be the first to admit his form has been patchy since he returned from that gruelling legbreak against Wales in March 2017. Coleman lost his place in the Everton starting XI last season and his position was believed to be under threat again with the return of Jonjoe Kenny from the Bundesliga. Yet Carlo Ancelotti has lit a fire under Coleman's belly. Coleman has especially thrived since the arrival of James Rodriguez. James seemed fated to be another big reputation-big disappointment Everton flop but he has arrived at Goodison locked-in and after three weeks, has forged a vital partnership with Coleman on the right side of the pitch.

Against Crystal Palace the link-up with Rodriguez was in full effect from the early stages of the match, and it led to Carlo Ancelotti's side grabbing their early lead.

A fantastic ball from the playmaker allowed an onrushing Coleman to break behind the back line, and he knew exactly where Dominic Calvert-Lewin would be to poke home.

That was far from the only time the pair down the right flank linked up, but that was the occasion that proved the most effective.

Everton’s opponents - West Brom, Spurs, Palace - are all pretty ordinary but given Everton's prolonged dalliance with mediocrity, three wins from three hints at a culture change. Coleman is there, leading from the front.

Coleman's harder-to-quantify leadership abilities remain prominent. A video of Coleman shouting down Kieran Gibbs in the first game of the season ("Hard man") went viral. Ancelotti has coached practically every good twenty-first century footballer in the world bar Messi and yesterday likened Coleman to his most decorated captains.

"He is an example for all the others of how you need to be: the attitude, the spirit - every day."

"I've had a lot of captains in my career but how Seamus expresses his love for the shirt is really top. He is a great captain, honestly.

"I don't want to forget anyone [I have worked with] but he is up there as a captain with [Paulo] Maldini, John Terry and Sergio Ramos."

We’re very interested in what Stephen Kenny makes of all of this. Kenny’s grand vision for the Irish football team may not include the 31-year-old in the long run. But it seems obvious that Coleman’s attributes as a leader and a defender will be desperately needed if Ireland are to have any hope of stealing a result in Bratislava.

Matt Doherty deserved a prominent role in the earlier parts of this campaign, but his performances in Ireland’s two Nations League games did not set international football alight. At this stage in its footballing evolution, Ireland doesn't seem ready to fully utilise Doherty's particular strengths as a wingback; it remains unclear if Kenny's 4-3-3 formation truly suits him either. Getting a result against Slovakia will inevitably require a strong serving of the full-blooded, backs-against-the-wall stoutheartedness that's marked every memorable Ireland performance of our lifetimes. Coleman embodies those values.

He already had the reputation. Now he has the form. Seamus Coleman deserves to start against Slovakia.

SEE ALSO: A New Irish Captain Was Born Tonight And His Name Is Seamus Coleman 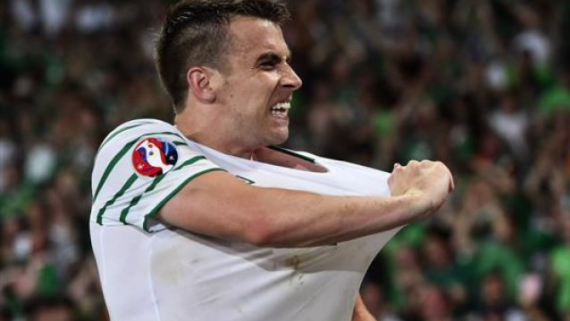