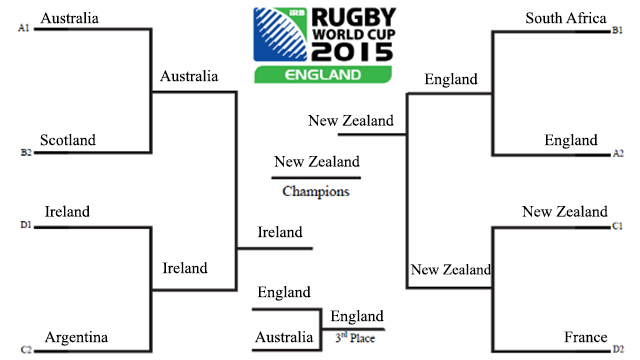 With the November internationals done and dusted, attentions now turn to building momentum in the 6 Nations for the Rugby World Cup. The squad building has been done for the most part, and it's all about results, and building combinations. Now is also the time to speculate about what will happen in the global showpiece in 10 months time. Can Ireland do what they've never done before, or will it all end in failure again. Here, we look at the likely scenarios for what will happen.

The hardest pool of all to call. Not just because of the main 3 contenders, but because Fiji are improving and will give each of the three a close game. While they do have some quality players, it's more likely they'll finish 4th. Not least because they face England and Australia within 5 days.

England have the distinct advantage of playing in Twickenham for all but one game, when they face Uruguay in the Etihad Stadium in Manchester. Wales won't have home advantage against England or Australia, but will play Uruguay and Fiji in the Millenium Stadium. It's hard to see Australia not improving over the next 10 months, meaning this pool is very hard to call.

I'd fancy a Michael Cheika side to beat England in Twickenham, and continue their dominance over Wales giving them the top spot. An England v Wales decider, with England's home advantage and their scheduling advantage (an extra two days rest before and after the Welsh game), probably tilts that tie in their favour. Good thing no one will remember this world cup prediction in 10 months time.

The second hardest pool to call. Japan and the United States, while extremely unlikely to qualify, are not the cannon fodder that other pools have. Japan ran the New Zealand Maori close this November, losing 20-18 after a last gasp try from the Maori. This is after Japan beat Wales, and USA narrowly lost to Ireland last summer.

The real battle in this pool will be between the improving nations of Scotland and Samoa. Scotland's November was an unqualified success, recording a big win over Argentina, before a narrow loss to New Zealand, and a big win over Tonga. Meanwhile Samoa are gathering a very tasty squad,even though they disappointed against Italy this November. It'll be a tough battle between these two, but I suspect Scotland have a coach that will have a similar influence that Ireland have with Joe Schmidt.

The South African rugby union (SARU) are planning on introducing racial quotas into the national team for 2015. That could disrupt the team, but not enough for them to miss out on qualifying as top of the pool.

This pool is fairly easy to predict. New Zealand will stroll through, Argentina will collect the second spot. The only thing we don't know is - who will get the 3rd place to automatically qualify for the World Cup in 2019 in Japan. I'd fancy Tonga to outlast Georgia, and that's what happened when the two met this November, Tonga winning 22-9.

Ireland have never had an easier pool before. France aren't the superpower they used to be, and Italy also seem to be struggling. France have improved enough recently, and Ireland will need to be weary. Italy can turn it on, and beat Ireland not too long ago.

Ireland are in the cosy position of watching Italy and France play each other first, and will know how things play out before their second last game with Italy before the final day decider with France. If France play like they did this November and select the right squad, they'll likely top the pool. More likely is that Ireland will out-think them, while they'll stubble into a victory over Italy. 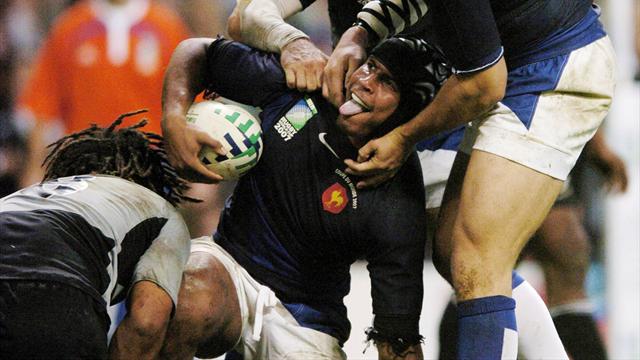 The first semi final takes place in the Millenium Stadium in Cardiff. It is a rematch of the quarter final in the same venue 8 years previous, where Theirry Dusautoir announced himself to the world with a super human performance featuring 37 tackles. That is to remind you that New Zealand have gone into a quarter final as heavier favourites than they will in 10 months time, and they did lose. I wouldn't bet on that happening again though. 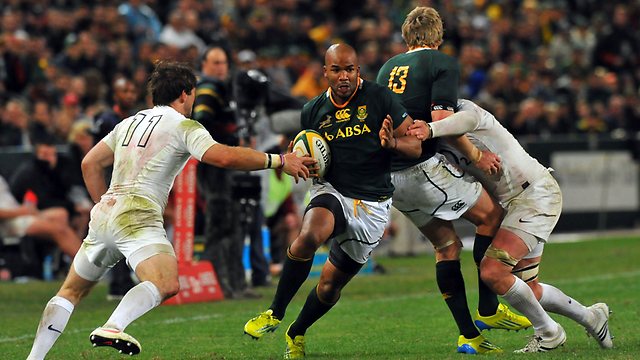 South Africa have been a shadow of the team that beat New Zealand two months ago. The new racial quota that is being introduced means that 5 of the 15 playing at any time must be black. Currently, they have Tendai Mtwarira and Bryan Habana firmly in their best XV, while the likes of JP Pietersen or Cornal Hendricks are now likely guaranteed a place, as well as someone like Siya Kolisi or Tebo Mohoje instead of former IRB player of the year Schalk Burger. This would also mean that one other position needs a black player. This is going to weaken their team, as they will likely have to not start one of Bismarck du Plessis for Scarra Ntumbeni, Handre Pollard for Elton Jantjies, Duane Vermuelen for Nizaam Carr, Willie le Roux for Cheslin Kolbe, or Damien de Allende for Jan Serfontein. These are all lesser players, and are taking out a world class player from their team.

England seem to have found a quality outhalf in George Ford, and are a threat under Lancaster. Home advantage against a South African team with all sorts of politics surrounding them should see the English into the semi finals. 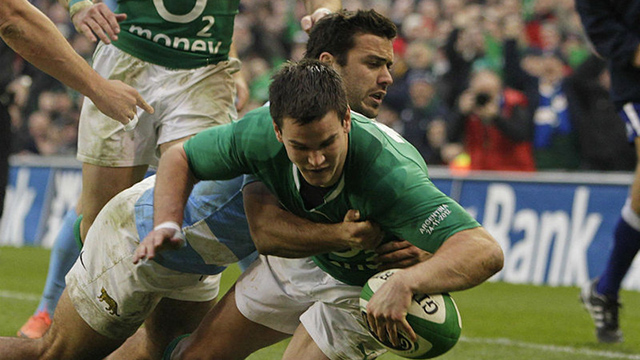 Both Ireland and Argentina were understrength when Ireland routed them in their summer tour this year. Argentina have dangerous young players like Manuel Montero or Pablo Matera to go with world class experience like Marcos Ayerza, Juan Martin Fernandez Lobbe or Nicholas Sanchez. Ireland will not have it their own way, but results this November suggest that Argentina still have a lot to figure out, especially after losing to Scotland, and only just overcoming Italy. 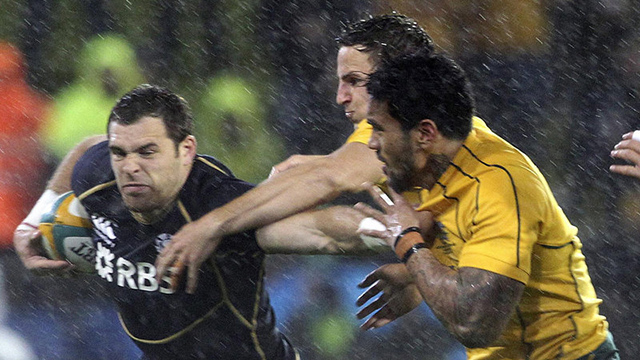 Scotland have made great strides this November, but I think a year under Cheika will release the Wallaby beast that threatened to cut loose against Ireland and England. The Waratahs 10-12-15 combination of Bernard Foley, Kurtley Beale and Israel Folau is full of woshkabomy, and wingers Henry Speight and potentially James O'Connor add to a devastating looking backline. 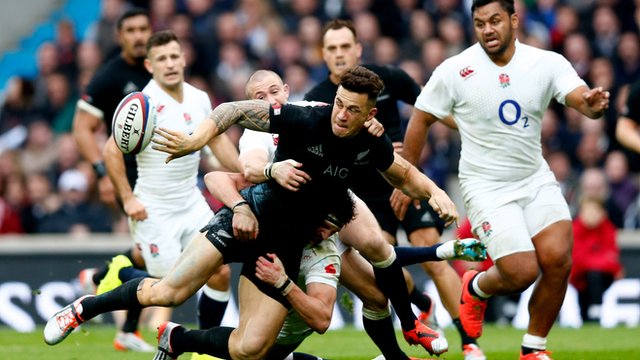 There's no shame in the home team losing to the best team in the world in a World Cup. Knowing England, there will still be inquests and calls for Lancaster to be fired, but the effort required to beat South Africa in the previous round will catch up to them. 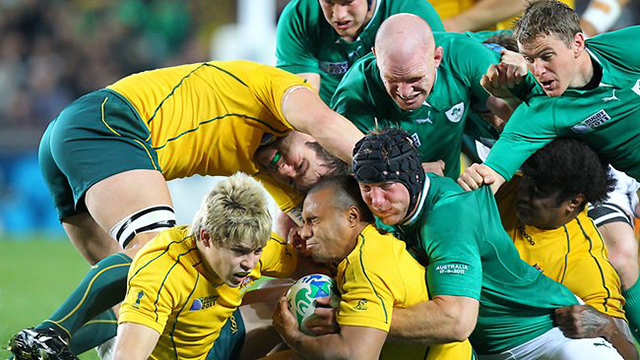 A re-match of the last game in November, except this time on neutral ground. Ireland will have the likes of Cian Healy and Sean O'Brien back, while a year under Cheika will improve the Wallabies no end. This is a tight game, but it's my article, and I say Ireland are going to win for the hell of it.

Conor Murray, Rory Best and Rob Kearney score tries to edge Ireland into a 19-0 lead inside the first 20 minutes. Julian Savea will give New Zealand a lifeline just before the half. A Sexton penalty increases Ireland's advantage before New Zealand mount their comeback with a penalty from Aaron Cruden, and a try from prop Franks. 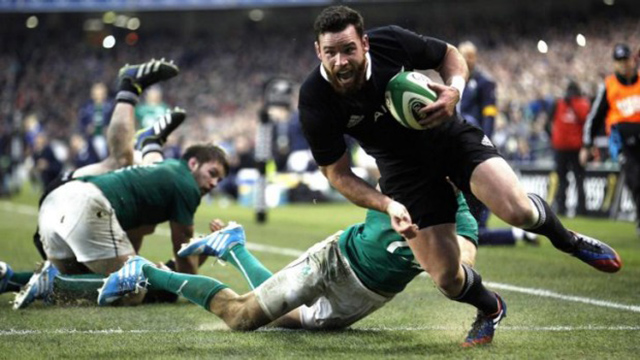