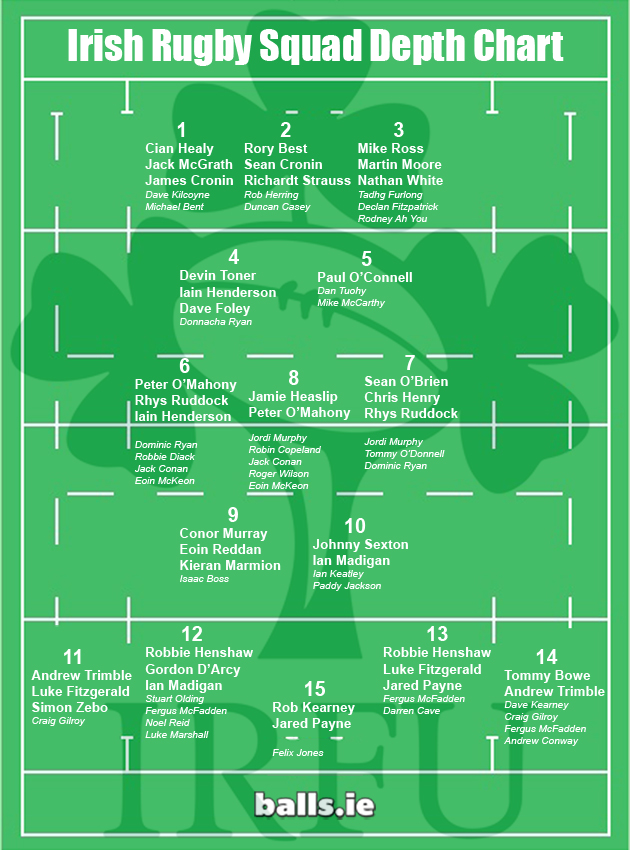 With the Irish team for the opening Six Nations squad being announced on Thursday, it's time for an update to see who is in the prime positions for those coveted World Cup squad places, while taking a look at the 23 men likely to be taking on Italy in the first game of the Six Nations.

NOTE: The Squad selected is based on Joe Schmidt's actual selections and not on opinion.

It's important for Ireland to put a marker down against Italy, both to start the Six Nations in the right manner, and to get the psychological advantage on our World Cup pool rivals.

There are more selection conundrums now than any Irish head coach has ever faced. There's actually a choice at tighthead, decisions to make at openside, injury worries at scrumhalf, while the centres and back three are anyone's guesses.

Here is what we think Joe Schmidt will announce:

Probable Irish Team To Face Italy In The Six Nations:

There are currently six players for the Irish team that can be assured of their places - captain Paul O'Connell, Jamie Heaslip, Peter O'Mahony, Rory Best, Tommy Bowe and Rob Kearney. You could add Johnny Sexton, Conor Murray and Cian Healy to that list when they are fit, but they aren't.

The other nine spots are all up for grabs. Mike Ross' place is under threat with the emergence of Marty Moore. Having lost his place for Leinster in the last two games, it's hard to see why Schmidt would choose to play Ross in the Wolfhounds game if he wasn't going to continue his run of playing him in every single game that Schmidt has picked the Ireland team for. It's not the pick I'd make, but that's not the point of this article.

Elsewhere, Cian Healy isn't ready for action just yet which means that Jack McGrath and James Cronin will be the two looseheads. Iain Henderson's barnstorming performance was the only highlight of the Wolfhounds game, and he could start to press Devin Toner's spot in the team should he maintain fitness.

Peter O'Mahony and Jamie Heaslip are two cast iron certainties in the back row, while the openside flanker spot will be interesting. There are three trains of thought on the first choice number 1:

In all events, there will be a battle between Jordi Murphy and Tommy O'Donnell for at worse, the bench spot. In every opportunity Schmidt has had to pick between the two, Murphy has always been selected. I don't see what that would change now that Murphy has proven his fitness.

The reports seem to suggest that Conor Murray is fit enough to play this weekend. I'm also fairly sure that Eoin Reddan will not be able to recover from medial ligament damage in 2 weeks. This leaves the bench spot between Kieran Marmion and Isaac Boss. Marmion has been improving a lot in the last two years, and will offer more impact off the bench than Boss.

In the even that Murray isn't able to start, I think that Joe will revert to tactics we've seen when he was in charge at Leinster. Isaac Boss started over Eoin Reddan in physical European away games, and I can see Schmidt sticking with that policy again if given the choice between Boss and Reddan.

In the centres, it's become a question of who will partner Robbie Henshaw. Will Henshaw stay at his familar outside centre position, or will he be moved inside just like in November? There are a few contenders to take the outside centre spot should Henshaw be moved in like Jared Payne, Luke Fitzgerald or Keith Earls. After a bright start against the Saxons, Earls faded and missed a number of tackles, perhaps showing that he's not fully match fit. Fitzgerald may not be ready to play after his illness, and his selection on the wing last week suggests that could be where Schmidt sees his international future.

I suspect that it could hinge on Murray's fitness. Should Murray not be fit, a Boss-Madigan-Henshaw and Payne 9-10-12-13 combination would be extremely lacking in experience. Schmidt is a big fan of experience and Gordon D'arcy 83 caps would be able to guide clubmate Ian Madigan and Robbie Henshaw on his Six Nations debut.

Joe Schmidt has never really been a fan of Simon Zebo, and has rarely selected him when there were other options. Does Schmidt stay with the incumbent, or will he go for one of Fitzgerald, Earls or Dave Kearney? Earls and Fitzgerald probably aren't ready, and Zebo's good form probably gets him ahead of the rest. If Fitzgerald overcomes his bout of sickness, I'd wager that Schmidt will plump for his versatility for the utility back bench spot.

One thing is for certain though, it's not just the impending returns of Sexton, O'Brien and Healy that will ensure that the team that starts the last game against Scotland in 7 weeks will be quite different to the one that kicks off precedings in Rome.