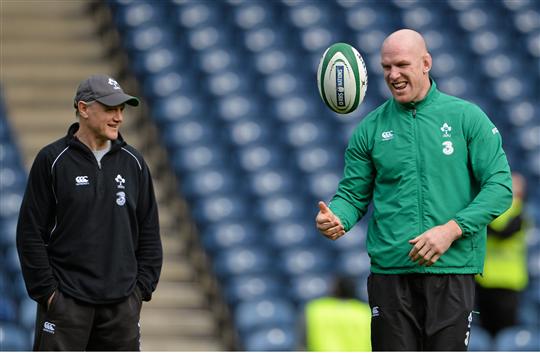 It was an unusual press conference for Joe Schmidt and David Nucifora yesterday. Not one for press conferences outside of international windows, Schmidt took the opportunity to address a number of issues including Matt O'Connor's continual criticism of the IRFU's player welfare system.

Schmidt and Nucifora also took the time to reassure Irish rugby fans about the future of Ireland captain Paul O'Connell.

O'Connell's future has been the subject of fierce rumours during the last few months, after a move to Pau was rumoured in November, O'Connell himself added to the speculation saying that he hadn't ruled out retiring after the World Cup this September/October.

More recently, O'Connell has been linked with other moves to France, first with Bernard Jackman's Grenoble, and nouveau-riche Toulon. However, Toulon have since come out to reject that they are chasing Ireland's captain.

Schmidt admitted that he will try and influence O'Connell's decision making, but acknowledges that O'Connell is a man to make his own decisions:

I don’t know if you have spent a lot of time with the man, but he makes his own decisions.

I have an incredible respect for the man. He has done a phenomenal job in leading Ireland and that is something which will continue through the World Cup.

Of course, we will try to influence him.

The IRFU's performance director David Nucifora echoed Schmidt's sentiment's. Nucifora revealed that there had been no discussions with O'Connell over any contract extensions or his future with the Munsterman's current deal not due to expire until June 2016:

Paul is contracted until the end of June 2016 so unless I hear otherwise thats what’s going on.

It is not an issue at the moment. Paul has got a contract at the moment and until it comes up as a subject for discussion.

Schmidt's contract also came up for discussion at the press conference, with the Ireland boss' deal also set to run out in June 2016. There were reports last week that the IRFU were looking to extend the Kiwi's deal.

Nucifora revealed that those discussions will be starting in the next few weeks:

We’re about to start talking about that over the coming weeks. We’re now back together and those things will commence over the next short period of time. When we’ve got something to say on that, you guys will be the first to hear for sure.

Schmidt is more focused on Ireland's preparations for the World Cup, with the first game at the end of May with the Barbarians coming to Limerick.

See Also: Joe Schmidt Is Having None Of Matt O'Connor's Complaining

See Also: The IRFU Are In Talks To Make The Best Signing They Could Possibly Make