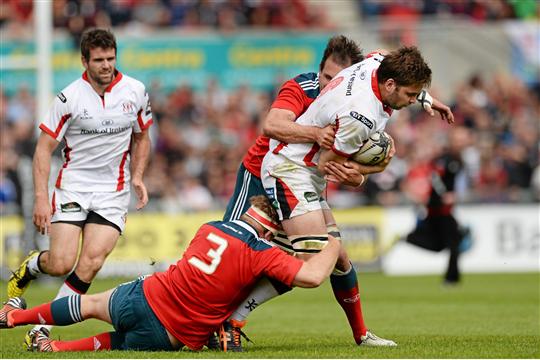 Munster and Ulster played out one of the more entertaining games played in Ireland this rugby season. The two remaining provinces in with a chance of Pro 12 glory met in Belfast and played out a wonderful 23-23 draw that featured two Ulster tries at the end of each half.

Both sides are still in the top four, with Munster third, level on points with first and second, while Ulster are a point behind in fourth.

First Iain Henderson did something magical to set up Tommy Bowe's try, but then he was in the naughty books as Nigel Owens showed him a red card.

But was it a red card? Those following on twitter were decidedly mixed in there responses as you can see, but what do you make of it.

Here is how fans and pundits reacted to the red card:

Red card - you are f’n joking! There was absolutely nothing in that.

Red card all day. No complaints. Cannot lead with the head. @UlsterRugby

Probably just a yellow. Amounts to the same thing with 7 left

Reckless but a little harsh on Henderson, no? #UlsVMun

I can't see how that decision comes. Henderson's season could be over for a clearout.

Reckless stuff from Henderson. Whether or not he meant it is irrelevant. He had no control over his body. Could have done serious damage.

That was not a red card. Are players not aloud to clear out rucks now

Prefer to see yellow for that #Pro12 #UlsVMun

Not sure you can argue against that red card.

Put it this way - if that wasn't Henderson and instead was someone like Courtney Lawes, would you still argue that wasn't reckless?