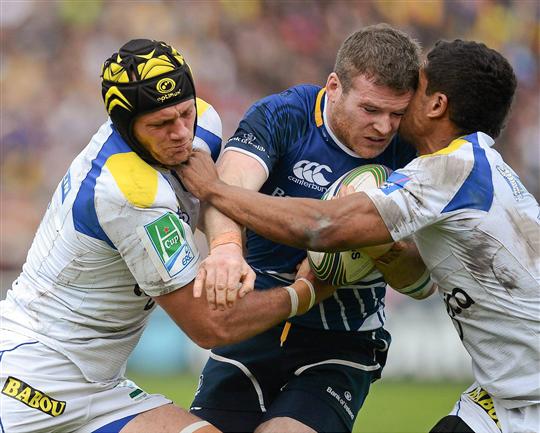 Gordon D'Arcy played in his final home game for Leinster on Friday night. Well, we hope he has. If he hasn't it'll mean that D'Arcy won't have been selected for Ireland in the World Cup, which at this stage of his career isn't how he wants to bow out.

D'Arcy, along with Shane Horgan, Shane Jennings, Brian O'Driscoll, Leo Cullen and Denis Hickie before him was a fantastic servant to Leinster and Irish rugby. There are countless memorable contributions from the magical maestro that will ensure that he is remembered in Irish rugby for years to come.

He wasn't just the second act to Brian O'Driscoll - he was a damn fine player in his own right.

Here at Balls.ie, we wanted to remember one of his greatest contributions as a Leinster player.

The setting was Bordeaux. April 2012. Leinster are two time European champions, facing their toughest test yet against a powerful Clermont Auvergne side who had swept all before them, and hadn't been beaten at home in a long long time.

This wasn't in their regular home stadium, but the ferocious support was all behind les Cannards. Joe Schmidt's Leinster were a force themselves. They had played some thrilling rugby up until that point, and this game was seen as the clash of the two best teams in Europe.

And so it proved.

It was an unbelievably tense game that came down to one moment. Watching it back you can still feel the tension rising inside you, here are the last five minutes of that game:

That an entire season, and entire competition, can come down to one tackle, one man (it happens around the 4:20 mark).

Without D'Arcy's tackle, Leinster aren't heralded as one of the better dynasties in European rugby history, along with Toulouse, Munster, Leicester and now Toulon.

That's how much Gordon D'Arcy means to Leinster.

See Also: When Gordon D’Arcy Scored One Of Irish Rugby’s Most Important Tries