It's been a different sort of summer for rugby fans in the west of Ireland. Never in their right minds did they think that they'd be spending June, July, and August as the PRO12 champions - but that's exactly what Connacht did.

They enter into the season in completely new territory. New expectations, a new target on their back. What does that mean for Connacht going into the season? And where does that title triumph rank in the career of John Muldoon? We asked him.

Connacht's captain John Muldoon has been with them through the tough times, and even he had to admit - that PRO12 win was right up there with winning the balls.ie beard of the year in 2013:

The PRO12 win ranks slightly below the beard bracket victory. No, obviously it was a great occasion for everyone, personally so for me because I had been there for so long. It was something that had been building for the last two years, so to go out and win the final was great. We had seen teams come from nowhere before and fail to win the final. But to keep true to ourselves, by playing and doing what we did to get there and win like that was special.

Of course, Connacht didn't just win the league last season. They played some exceptional and entertaining rugby on their way to surprising everyone. It's won them a lot of fans, and Muldoon is wary to keep the momentum going to keep the new Connacht fans around - the ones who aren't used to Connacht losing and will have high expectations.

Of course, the squad is largely the same from last season. The youngsters have another year under their belt - Matt Healy, Tiernan O'Halloran, Ultan Dillane, Kieran Marmion, and Finlay Bealham all toured South Africa with Ireland. And they brought in some new players in Marnitz Boshoff - who hasn't arrived yet - Cian Kelleher, and Lewis Stevenson; whilst some big characters have left. Muldoon says it'll take time for the new lads to bed in - but he isn't worried about losing Henshaw or Rodney Ah You:

Unfortunately that's the job we're in. We've had some big characters leave the squad. Two years ago Swifty left, who's been a mainstay of the group for a very very long time. This year George, Rodney, Dave McSharry have all left.

The big thing is, as someone leaves, it opens the door for somebody else. Sometimes it's one of the younger lads who steps into that hole and gets a little bit more confidence. Feels more involved in the squad, or maybe feels more at home, grows up and matures. It's something that's a challenge for everyone, a challenge in the squad. That's just the way it is. Unfortunately for everyone there's no time for sentiment. It gives time for someone else to shine.

That was something that defined Connacht in 2015/16. There was a stage in March that Robbie Henshaw had played more games for Ireland that season than Connacht - but Craig Ronaldson, Conor Finn, Rory Parata, and Peter Robb had done brilliantly filling in for him.

It was something Muldoon was keen to stress as the key for Connacht's success. The new depth in the squad. There are competition for every place - even Sean O'Brien is nipping at Muldoon's heels - and the youngsters are coming through thick and fast from Nigel Carolan's academy and seamlessly slotting in. 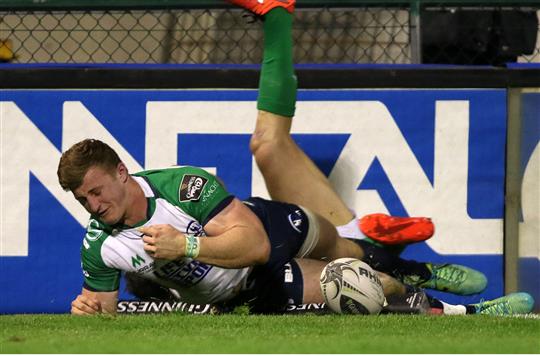 Ultan Dillane and Finlay Bealham came out of nowhere to make starring roles - who does Muldoon see as the next youngsters to watch out for this season?

There's some good young fellas here, and there's some talent. Cormac Brennan has started the season well, he's an outside back whose started the preseason well. I think Pete Robb obviously, a lot of Connacht fans will know Pete from last year, but I think he'll have a very very good year this year. Rory Parata, as well, they had mixed in and out when Robbie wasn't available and Bundee wasn't playing - I think the two of them will have big years.

Up front, James Connolly had a decent season last year and there's a couple more young fellas who will hopefully come through. But I think the big one for us is that a few of those players who played last year and who got a taste of it and maybe played five or six, seven games will push on and try and make break through years. We saw from the likes of Ultan like year and Finlay that if you play for Connacht week in and week out that you might not be too far away from the Irish jersey either.

It all sounds good for Connacht so far. They 'did a Leicester' last season, so will they follow suit this year by replicating the draw and a loss so far in the Premier League? The bookies have them as sixth favourites for the PRO12 title at 10/1, and a generous 8/1 to win their Champions Cup pool behind Wasps. Does that even register in camp? Muldoon says it hasn't, and he was surprised to hear the bookies odds', and ultimately agreed with the bookmakers thoughts:

One of our biggest focuses this preseason was to improve our skills, to get even better at what we've done. There's a perception out there that we don't kick the ball, that's not true.

Maybe we'll see that more, maybe not. That's probably a fair assessment of where the bookies have us, I think a top six finish is ultimately one of our key goals. 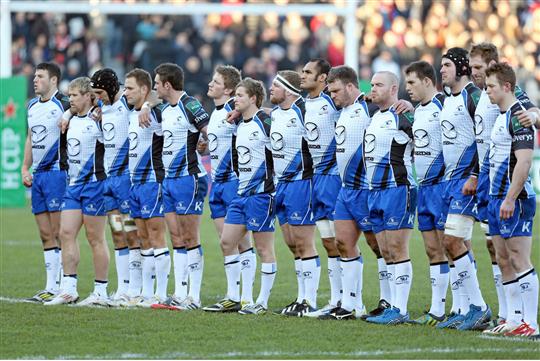 Connacht face a familiar foe in Toulouse in their return to Europe's elite, having famously recorded a stunning victory in Toulouse two years ago. At the time it was one of Connacht's best ever victories, but now you get the sense that should it happen again this year it will be met with less hysteria and celebration. It's a sign of how far Connacht have come since that December day, and Muldoon sees it as one of the key moments in claiming the PRO12 title. It gave the young Connacht squad confidence, and in the build-up to the game Connacht made some defensive changes to their gameplan in an attempt to arrest some poor form - changes that Muldoon says they are still using to this day.

It was one of those stepping stones, and one of those key moments and when you look back thinking it was a turning point in Pat's reign as a coach, and a turning point in a lot of ways to see what we could achieve down the line. Unfortunately it probably wouldn't be as big a day if we beat them again this year, and yet you look back with fond memories thinking that was probably one of the big stepping stones to what we achieved last season.

That day certainly stands out. You do need stepping stones, those kind of confidence builders. And to go over to Toulouse and to win over there, was definitely one of those. I think you've to remember and look back on the fact that we had a very, very young squad. There was a very young and fresh Kieran Marmion and Henshaw. So it definitely breeds confidence when you go over to a big stadium like that and a good team and win.

Of course, much like any of Connacht's big wins throughout the years - that Toulouse victory was followed by a heavy defeat to the same opposition the following week. Backing up big wins was something that had stopped the team from success - but that all changed very quickly last season. What does Muldoon put that down to?

The big thing is the depth in the squad now. There's a real mentality here that if someone gets injured or if you gets a chance, that the next fella steps in and does an equally good job. There's probably a little bit more pressure put on the players underneath.

That was probably our biggest deficiency in the past, maybe when we make a couple of changes we wouldn't be as good. But I think the seamless transition between one player coming in and the next player coming in, seems to have been really taken on board, and that's down to the management and the players expecting more and asking for more.

Over the last 12 months to 18 month we've seen more of that in Connacht, and that's the key thing - the depth that we have in the squad. We are able to rotate players on a weekly basis and still have a level of performance that's right up there.

So when does a squad realises that is happening and that something special is taking place. No one expected Connacht to win the PRO12, not least the players - but when did they start to believe? According to Muldoon he looks at two specific games. One in January - but the bigger won when they beat Munster in the Sportsground 35-14:

We had a key couple of games. We had Leinster at home, Grenoble away in the quarterfinal, and then Munster at home. Munster started the game very well, and we were 14-6 down. And at half-time it was 21-14. Running off the pitch, I turned out around to one of the lads and said "Munster are done or we've this game won". There was 40 minutes left in the game, but we knew at that stage we had the game won. The momentum change had been so big in ten minutes, we knew we had the game won.

That would have given a lot of the lads confidence, especially the way they started, not to panic and to stick to the things we do well. Ultimately within ten minutes the game had changed for us. I think we got a bonus point win out of that, and that was huge performance and a huge turning point for us.

There was a couple of others as well. The worst block we went through last year was around Christmas, we had a few injuries in a couple of positions. We went on a four game losing run. To beat Scarlets in January after losing narrowly to them over in Scarlets. That was another key point in the season. It got us back on track, and to beat them at home with a bonus point because it was the two of us at the top of the table and that was a big game for us. 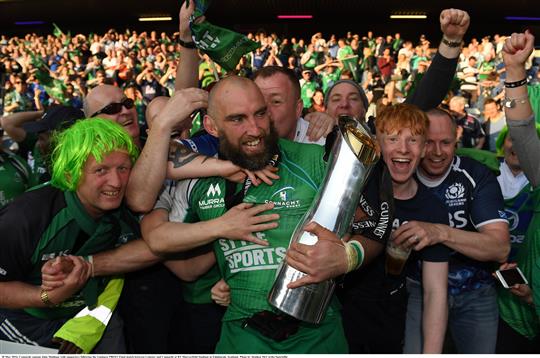 Being from the heartland of Galway hurling in Portumna, Muldoon was following the hurlers - and managed to get some players to follow the action:

Nathan White and Tom McCartney were in Pearse Stadium a couple times this year at the some of the hurling and football. Pat [Lam] was at the Galway-Roscommon game in Pearse stadium, and he was up in Croke Park at the Kilkenny-Galway Leinster final. A lot of them are interested in it, and the fact that they are in Ireland and it's such big game that they want to show some interest. I suppose the big crowds, they want to enjoy the spectacle that is.

Muldoon has just one goal for the upcoming season, avenging his beard bracket defeat to reclaim his title. What are his tactics for the year? Muldoon seems worried.

Mazda Ireland are running a rugby clinic in Carton House to celebrate their continued backing of Connacht Rugby. You can get more details here.

See Also: Balls.ie Beard Bracket 2015: We Have A Winner And What A Winner It Is