"Deary Me, I Used To Feel Sorry For Ireland" - Most Memorable Moments From Ireland v Scotland

It's Edinburgh for the Six Nations opener this week. From a historical perspective, Ireland v Scotland has been characterised by long winning and losing streaks. The Scots went a quarter of a century without winning in Dublin between the mid-30s and the early 60s, while Ireland didn't beat the Scots for 12 years until the dawn of this millennium. The pendulum has swung dramatically in the modern era.

Here are some of the most memorable moments from Ireland-Scotland.

16 January 1993 - The Irish players trudged into the dressing room after their 15-3 defeat in the Five Nations opener in Murrayfield. It was Ireland's 10th test defeat in a row. They hadn't won a match against another international team since beating Japan in the 1991 World Cup.

The ebullient Noel 'Noisy' Murphy made a game effort to lift the depression that was settling in the room.

"C'mon lads, heads up, I saw a lot of positives out there," he cried.

Geoghegan was earning his 13th cap for Ireland that day. Thus far, he had avoided defeat twice. One of those non-defeats was a draw against Wales in Cardiff. The other was a win against Zimbabwe.

Ireland's most exciting back was fed up. Irish rugby lore has it that he didn't receive a single pass in an attacking position in the 1992 Five Nations championship. We've seen no actual stats confirming this but it is far from implausible. 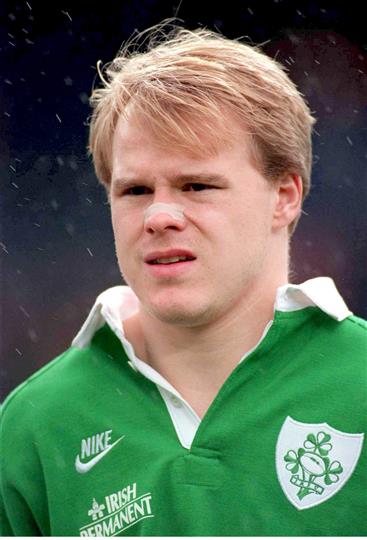 The next week, he gave a lengthy interview to David Walsh in the Sunday Independent in which he unloaded all his frustrations about the state of Irish rugby.

Though he didn't single out any individuals, the article caused consternation within the squad. He told the Irish Times eight years later he regretted speaking out.

Should have kept my mouth shut. I didn't slag any individuals off, it was more an attack on the system. Naivety really - I was young, wanted to lash out. I think it highlighted the truth of what was going on but some of the lads probably resented me saying it. And I shouldn't have said it, in retrospect. Your team-mates are your team-mates...

I got suspended for one training session or something ridiculous like that. But yeah, Noisy (Noel Murphy) had a real go at me.

The outburst was later presumed to have cost Geoghegan his place on that summer's Lions tour. This type of insubordination just wasn't tolerated in those days.

Ironically, it was followed by Ireland's best Five Nations performance of the decade. 1993 was the only year in which Ireland achieved the holy grail of two Five Nations victories. 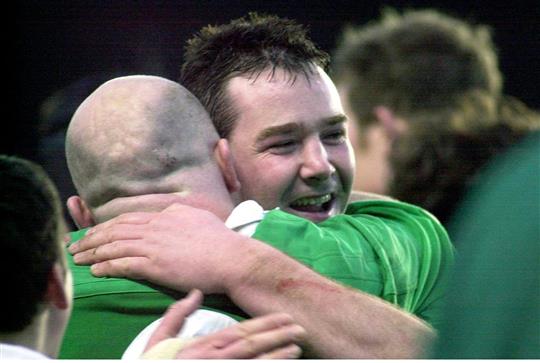 Ireland stepped from one era - one of dispiriting defeats and relentless underachievement punctuated by the occasional win in Cardiff - into another era - one of challenging for championships and Triple Crowns where the thought of winning in Paris wasn't laughable - in the blink of an eye.

A fortnight before, Ireland were slaughtered by Clive Woodward's England in Twickenham. 50-18 was the final score. Mercifully, fewer people than normal were able to watch the match as Sky Sports held the rights to games in Twickers in those days.

Gatland, already mentally preparing himself for the sack, opted to bow out in style by making eight changes to the team for the Scotland team.

Limerick rugby people had been complaining of a Dublin bias in Irish team selections since time immemorial. (Prior to the late 1990s, they complained of a Cork-bias in Munster selections but that's another matter). Their complaints were never louder than in the late 90s, when the Limerick clubs dominated the AIL and Munster were starting to make tentative strides in the European Cup.

They couldn't really complain about the team selection for the Ireland-Scotland game in 2000. Warren Gatland took account of Munster's progress in Europe.

Some of those omitted would never play for Ireland again, some would only make fleeting appearances, while others (such as Humphreys and Maggs) would hang in doggedly and eventually regain their place.

In From There To Here, Brendan Fanning observed that the major selection gamble coming on top of Ireland's dismal World Cup performance would certainly have resulted in Warren Gatland's resignation had things gone awry that Saturday. Everything pointed to the logical conclusion of Gatland announcing his departure at 5.30pm on 19 February 2000.

"But then the whole thing took off in the other direction," Fanning wrote. 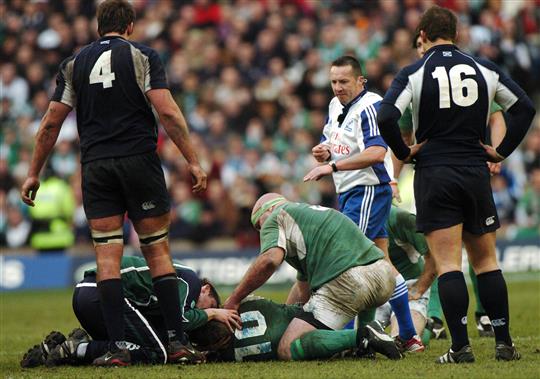 Ireland claimed their third Triple Crown in four years at Murrayfield but the match was to prove costly in the points difference battle for that year's championship.

It was a battle which Ireland weren't aware they were in.

Considering that Scotland were coming off the back of a 20-point home loss to Italy, Ireland surely have reason to rue their one-point win in the same venue.

Professionals usually eschew such arrogance and talk only in terms of victories. Supporters aren't bound by such discipline. Two weeks later, France beat Scotland by more than the requisite 24 points to pip Ireland to the Six Nations.

Coming off the euphoria of the Croke Park win over England, Ireland won a scrappy and unmemorable game in Edinburgh. Ronan O'Gara scored all of Ireland's points, including a 30th minute try.

He was also at the centre of the game's most controversial moment in the final seconds. Eddie O'Sullivan claimed afterwards that ROG had been choked in a ruck in over time.

Someone tried to choke O'Gara. Someone had their arm around his neck, cut off his air supply and he went blue. I'd rather not say who it was. I believe it was deliberate. Putting your hand around someone's neck and trying to choke them is hard to do by accident. I didn't see it because I'm sat in the stands like everyone else and he was at the bottom of a ruck with people on top of him. When the ruck broke up Ronan had gone blue and was losing consciousness. The doctor came on, checked his air supply was clear and he started breathing again.

It quickly went around that Nathan Hines was the guilty man. However, a year later, O'Gara declared the choking story a "myth" and didn't back his coach's account. The coach, it should be said, was only going on the word of the other Irish players.

That's a myth, you know. It didn't happen. I did lose consciousness but not as a result of choking. That is an awful allegation to put against any player. I apologised to Nathan Hines because I didn't know what happened.

I think one or two of the lads felt I had been choked. I got badly winded and I was caught in a terrible position with (John] Hayes on one side of me and some other big ape on the other side of me and I couldn't move. I was trying to hit them, hit them because I felt I was gradually losing air and it is a nasty feeling. 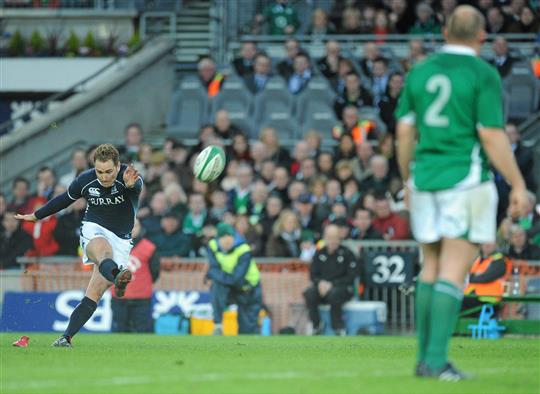 Big Jim Hamilton wrote last Sunday that he unknowingly struck up a conversation with a few band members from Mumford and Sons in an (unnamed) Dublin nightclub after Scotland's Croke Park win in 2010.

Neither he nor Allan Jacobsen knew they were talking to (fellow?) celebrities. Soon, a host of well-wishers approached the group seeking autographs and photographs.

Rather touchingly, Hamilton assumed that Dublin nightclub goers were so well informed about rugby that they were wowed by the presence of a Scottish second row in their midst.

He told the Mumfords that he and Jacobsen had just won a famous victory against Ireland and this is just the sort of thing you had to put up with as a rugby player.

A cruel bouncer had to burst their bubble by telling him that the well-wishes were being directed at their new, bearded friends.

Jim and Allan were giddily bathing in the afterglow of a rare and unexpected victory. It remains Scotland's only win in Dublin in the 21st century.

It was the final international rugby match played in Croke Park. Despite demonstrating considerable improvement in 2010, Scotland were once more staring down the barrel of another 6th placed finished. Ireland, meanwhile, were casually seeking their 5th Triple Crown in seven years.

It was surely Johnny Sexton's bleakest moment in an Ireland jersey. He endured a horrible afternoon from the kicking tee against Wales a fortnight earlier. But the Welsh were far too abject to capitalise and Ireland still won handsomely. He wouldn't be so lucky against Scotland.

The worst moment arrived in the second half with Ireland 17-7 behind. A penalty was awarded while ROG was warming up on the line. An impatient O'Gara tried to enter the pitch in time to take the kick. There was confusion as Sexton, ball in hand and standing over the kicking tee, stared at the sideline in disbelief, demanding to know if they were really going to substitute him at such a moment. In the end, they allowed him to take the kick. He finally nailed a proper one and it was 17-10.

Soon after, Tommy Bowe battled his way over the line in the corner to level the game. Both sides then traded penalties before Dan Parks lashed a tremendous late penalty between the sticks from under the Hogan Stand. 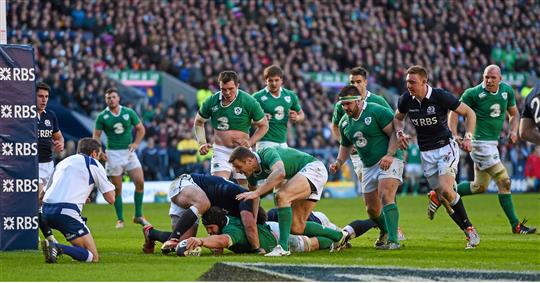 The 2015 win in Murrayfield provoked great celebration in Ireland and great soul-searching in Scotland. It was taken as the most dramatic illustration yet of how far Ireland had progressed beyond Scotland in the professional era.

Ireland sealed their second successive Six Nations title, nosing ahead of England and Wales in the points difference race. The Scots finished last and received another rap of the wooden spoon. A proper wooden spoon too, aka, a whitewash. Over in Twickers, England beat France by 20 points but fell short.

It was all too much for a couple of England players. Graciousness was entirely beyond them after finishing runners-up for a 4th successive year.

Here was Mike Brown's assessment of the final day's play.

Fair play to France, they played a game. I don't need to saying anything else. Everyone knows it.

Courtney Lawes and Ben Youngs said much the same. This prompted legendary Scottish out-half John Rutherford to step forth and defend the honour of his homeland.

A couple of days after last year's Six Nations finale, while the feast was going on elsewhere, a few podcasters on the Scotsman website wearily poked their way through the wreckage of another miserable Scottish season.

In the midst of all the gallows humour, the identity of the champions prompted one contributor to recall happier times - when the competition whipping boys wore different coloured shirts.

I remember back in the 80s and 90s, I used to feel sorry for Ireland. I thought they'd never win anything.

Look at them now, deary me, back to back Six Nations champions. Now, we look like the ones who aren't going to win anything. Now we're the ones people are feeling sorry for.