Adam Jones has first-hand experience of the detail which goes into Joe Schmidt's coaching.

The former Wales tighthead prop was at Harlequins in 2015 when the Premiership side trained against Ireland just prior to that year's World Cup.

"I had the full Irish kit, Rala sorted me out with a tracksuit and stuff - Paulie (Paul O'Connell) took the piss a bit," says Jones, speaking ahead of this weekend's Guinness Six Nations match between Wales and Ireland.

I could see how he (Joe Schmidt) was. If you're not doing exactly what he says, he'd stop the session and he'd [explain what should be happening]. The detail was something I hadn't seen before.

His eyes were Johnny Sexton. It was essentially those two coaching the team, which was unbelievable to watch because a lot drills when you're coaching is player led, but when they were running plays and patterns he was on the field telling them what to do.

And if it wasn't done exactly how he wanted it, then he'd stop, bollock the boys - which was amazing, you don't see much bollocking done any more, but he wasn't scared to do that.

The detail and the dynamic between him and Sexton was interesting to watch.

"Even the angle Mike Ross is running, if you're too deep or too flat he'd stop and put you in place," added Jones. "And if he wasn't doing it, Johnny Sexton was doing it." 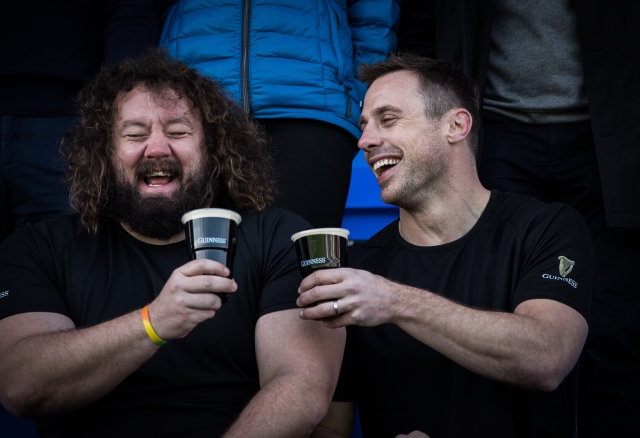 Two years earlier, during the final week of the Lions tour of Australia, Jones had his first experience of the fire Johnny Sexton can light on a training pitch.

"It was a pull-out from the back of a maul. We had Jamie (Roberts) coming flat, Hibbs (Richard Hibbard) was supposed to play it out the back to Johnny. Hibbs couldn't quite get it right. And he went at Hibbs.

"Because he knew everyone's role - because Hibbs didn't know his role - it really pissed him off. You can see it in Schmidt, the detail around it.

"International rugby probably doesn't go into that much detail [usually] because you don't have that much time. But what I've seen of them, some of the intricacies around the plays are down to a fine art and that's what makes him such a good coach."

Former Irish International Tommy Bowe and former Welsh International Adam Jones caught up over a pint of the black stuff ahead of this weekend’s highly anticipated final round of the 2019 GUINNESS SIX NATIONS Wales v Ireland fixture. Despite playing against each other for their respective national teams, Bowe and Jones have also played as team mates, putting national rivalries aside during their time at Ospreys and whilst wearing the British and Irish Lions jersey. The pair discussed their old rivalries at international level, their shared time as team mates, and how their great friendship, born through sport that unites them on and off the pitch, continues to thrive since their retirements.

Podcasts
1 week ago
By Michael McCarthy
This Week In... 2004 - A Triple Crown At Last & The Maddest Champions League Of All
3

Rugby
6 days ago
By Balls Team
Italy International Joins Covid-19 Fight As Volunteer Ambulance Driver
Podcasts
1 week ago
By Michael McCarthy
This Week In... 2004 - A Triple Crown At Last & The Maddest Champions League Of All
Rugby
2 weeks ago
By Balls Team
Danny Care Invokes 'Banter' Defence For Joe Marler
Popular on Balls
The Rewind
19 hours ago
By Gary Connaughton
Houseparty Deny Claims App Has Been Used To Hack Users' Data
5