The Ireland U20s endured their first defeat since March 2018 last Thursday when England produced a ruthless and physically dominant display as they recorded a 25-14 bonus point win in Cardiff to put them in control of this year’s championship. While Ireland will be disappointed with the result, they will undoubtedly be proud of their efforts as they hung in for most of the game and in hindsight will probably be disappointed not to come away with a losing bonus point at the end. Failure to get anything out of the game puts England U20s in the driving seat. Ireland will require Wales or Italy to take points off England as well as Ireland U20s getting wins over Italy and France.

The night started well for Ireland who controlled much of the opening exchanges and should have taken the lead but Nathan Doak’s 2nd-minute penalty attempt drifted wide from 45m out. Ireland’s narrow attack of one-off runners never put the England defence under any pressure and it became very difficult for the Irish players to cross the gain-line. After the opening 15 minutes, Ireland’s discipline, which has been good all championship, began to be a liability. It invited the huge England pack into the Ireland 22m zone and unfortunately, Ireland had no answers to the English powerful maul 7m out. It became the trend for the rest of the game, as Ireland’s defence, lineout, scrum and discipline all gave way to the English power game.

While the result will be disappointing to these young men and their coaches, this game will be great learning in their development as long as the lessons are learnt. Playing U20s with Ireland is not about winning championships, it is about providing opportunities in a young player’s career. It's a stepping stone, a rite of passage and an opportunity to provide game time for a player to show the watching provincial coaches/academy staff their talents. Many a professional Irish player has had success and failure in this jersey and long may this continue for Irish rugby.

There were glimpses of Jamie Osborne’s exceptional talent on display with a superb pass to put Oisin McCormack away for in the 24th minute. This excellent blindside attack, a strategy that needed to be explored more, came to nothing as they gave away yet another penalty. Osborne’s long and accurate left boot is a huge advantage to the team and his aerial skill level are far above his age profile. Osborne is uniquely different to other fullbacks in Irish rugby as he is very comfortable playing as a broken field runner, a strike player and a second playmaker with a kicking game to match.

England undoubtedly did their homework on Ireland’s key man and captain Alex Kendellen. This game will be great for his development and working on finding different solutions to the challenges he faced. He was still exceptional and his work rate and leadership ensured that Ireland stayed in the fight till the end. His carrying off the scrum in the 29th minute was a sight to behold as he swatted the English scrum-half and carried their #7 and 8 for a 15m gain. The turnover win in the second half was also of the highest level.

Ireland u20s No.8 Alex Kendellen was again impressive last night. The carry from a 5m scrum with 2 England back-rows hanging out of him was impressive #IREvENG #U20SixNations #FutureisGreen pic.twitter.com/Oe3vb9BHVH

While losing a 2-year unbeaten record will be disappointing for this group, there isn’t much time to feel sorry for themselves. The next task for these players is a game against an inconsistent Italian u20s side on Wednesday afternoon, with an opportunity to show their talents again. There is a short turnaround to fix some of the problems of Thursday night. The main fixes will be the team's discipline, while the forwards will hopefully fix some of the scrum and lineout problems. This game may provide an opportunity for the coaching staff to see other members of the squad, with the likes of prop Jack Boyle and talented backrowers Reuban Crothers and Daniel Okeke itching to start.

SEE ALSO: 'Give Us 10 More Minutes And It Could Be A Different Result' 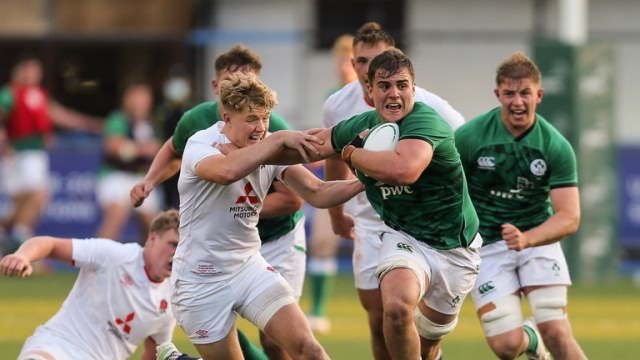 Rugby
2 months ago
By Brett Igoe
Analysis: U20s Campaign Leaves Plenty To Be Excited About For Ireland
Rugby
2 months ago
By PJ Browne
Gutsy Ireland Lose Entertaining Game To France In U20 Six Nations
Rugby
2 months ago
By Andrew Dempsey
Seven Changes For Ireland U20 Team To Take On France
Popular on Balls
Golf
1 hour ago
By Jonathan Byrne
Sky's Ryder Cup Holograms Are Freaking People Out
GAA
1 hour ago
By Donny Mahoney
Much Has Changed Since Jack O'Connor Last Managed Kerry
Golf
2 hours ago
By Jonathan Byrne
Bryson DeChambeau Hit One Of The Most Audacious Drives In Ryder Cup History
Golf
3 hours ago
By Eoin Harrington
Shane Lowry Made A Brilliant Start To His First Ryder Cup Round