Ireland set up a Triple Crown decider after their second win in this year’s Six Nations U20s competition, with a 40-12 bonus point win against host nation Wales. This is a fine collection of Irish players Richie Murphy has on his hands which will hopefully get better as this tournament progresses. The Ireland U20s - who are sponsored by PwC - have been a hotbed of talent over the years with tournament wins in 2007, 2010 and 2019, producing players who have backboned the Irish provinces over the years.

Coach Richie Murphy will be busy writing his thank you cards to the provinces for this crop of players. The development that takes place with these players is simply outstanding and even more impressive given the restrictions of the last 18 months. It is to the credit of their clubs and schools for installing the foundations for their development and to the provinces for setting up world-class support in coaching, strength and conditioning, tactical analysis, and medical and nutritional development. These players arrive at the door of professional rugby ready for the icing on the cake that the Ireland U20s provide.

Captain Alex Kendellen again lead from the front with another excellent performance. But it was his able lieutenants who produced the goods on a fresh evening in Cardiff. Ulster’s goalkicking scrum-half Nathan Doak, son of former Ulster coach Neil Doak, announced himself to the Irish rugby public Friday evening --- and what a way to introduce himself. His speed of service is a key part of this teams strategy and his continual threat around the rucks was a real struggle for the Welsh defence.

He marshalled the troops well all night and like all good scrum-halves, he certainly kept the French referee on his toes with his continual reminder to him of the laws of the game. His execution of an array of passing skills was excellent with an outstanding flat pass off a midfield scrum to Cathal Forde for Ireland’s first try. His vision is of the highest order with some astute kicking to gain his team valuable field position. Doak plays a key role in this teams 13/2 defensive system with him commanding the backfield in defence with some very good defensive reads to nullify Wales’s attack as well as some excellent contestable wins in the air. Doak topped off his excellent performance with a try straight out of the Antoine Dupont playbook. After fielding a high ball in the backfield he set off to beat four Welsh defenders to put Osborne through but as Osbourne was tackled 8m from the line Doak was on hand to receive the offload to score his first try at this level.

Some running from Nathan Doak here to set Ireland away for the try 🙌 #FutureIsGreen pic.twitter.com/MLLg1PawMg

There was also fine performances from Ireland’s two wingers with the terrific Chris Cosgrave picking up one of the tries of this year’s tournament with his “over to unders line” from a clever Jamie Osborne pass to get Ireland’s 2nd try.

Some nice play by Chris Cosgrave for @IrishRugby 20s. Lovely overs to under line for his try (nice pass by Osborne to) #U20SixNations #WALvIRE #FutureIsGreen pic.twitter.com/zx8EcDEPzu

Harry Sheridan delivered another workmanlike performance from the 2nd row. The Ulster man was at the top of the defence charts with his 16 tackles and his 9 ball carries. He will certainly continue to improve on his two impressive performance to date.

While Kendellen and his teammates know that there are tougher battles ahead, Thursday night’s top of the table clash against England will be the tie of the round as they go in search of Ireland’s third Triple Crown in three years at this level. 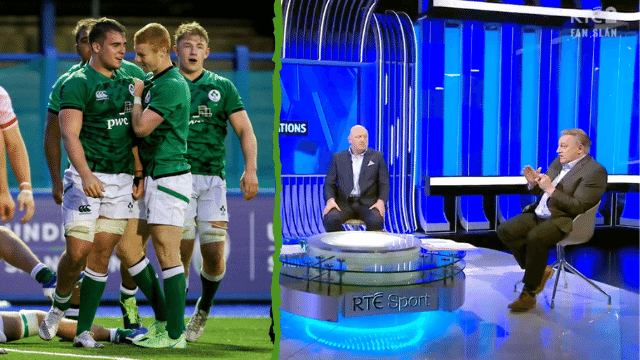