There were countless stars on the day of Ireland's third ever victory over the All Blacks on Saturday, but Andy Farrell thought that the crowd in the Aviva Stadium deserved a special mention for the atmosphere on a special day for Farrell's team.

Farrell lamented the soundproof box he and his coaches were stuck in for the duration of the game - but said that the difference made by the noise from the crowd was clear to see in the closing stages.

Andy Farrell's Ireland team are building in confidence and a huge win over old rivals England at the close of this year's Six Nations seems to have spurred on a terrific run of form. That culminated in a massive win over the All Blacks on Saturday night in the Aviva Stadium, on a day Irish fans will not forget for quite some time.

The atmosphere in Dublin was stunning right from the off, with an amazing reception for the New Zealand haka, and it didn't let up throughout. In his post-match interview with RTÉ, Farrell praised the role the Irish fans played in the team's 29-20 win:

It's nervous enough in that coaches' box - it's soundproofed, so all we can hear is ourselves! We can't really hear the crowd, so I'd much rather be outside enjoying the atmosphere.

We asked the boys to bring enough moments to the crowd to get them on song - that was right the way through the game. It certainly helped in the last 10 minutes.

It was a proud day for Farrell, where the fast attacking style he has worked on introducing came to the fore, exemplified by outstanding free-flowing tries for James Lowe and Caelan Doris.

He said that he was happy with how Ireland dealt with adversity during the game, and how they responded to going in at half-time five points down, despite an excellent first-half performance.

Listen, it was a fantastic day for Irish rugby and I'm so proud of the lads.

Being brave is to stick to the process, to trust in what we're trying to achieve. Being nice and calm in how we're trying to execute our plays etc. Make sure that we're staying disciplined. We lost a little bit of that, we were going off our feet a bit, got a few penalties taken away because of it.

But I thought we refocused at half-time, we stayed nice and calm and therefore the plan was executed nicely. We were brave to back it up as well.

The hardest part about sport is being consistent. We've had a couple of good performances now and obviously it was a tough ask - we wanted to back ourselves today and see where we're at. It's a nice performance and we get the victory to go with it!

It's special for the players, they believe in what they're doing. It's nice to get the reward, you know? We're on to the next one already. Argentina are a good side, nice and physical. We'll dust ourselves off and enjoy this one first, but we're back to work next week.

The attitude of Andy Farrell and his Irish team after such a famous scalp is an indicator that this team have no indication of letting up this progress any time soon.

On a week of star-studded visits to the Aviva Stadium, Farrell's side finished it off in style, and expectations will be high that they can end the autumn series in similar fashion when they face Argentina next Sunday.

SEE ALSO: Player Ratings As Ireland Beat All Blacks With Performance For The Ages 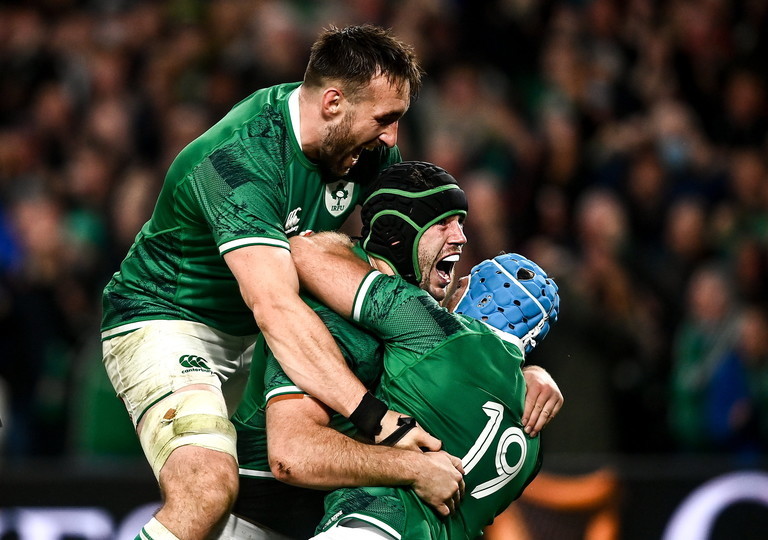