The Autumn Internationals always seem to bring to light new players to the international scene. Whether they are making their debut or they string together a run of performances that make the rugby world take notice.

For Ireland, the likes of Gibson-Park, James Lowe, and Caelan Doris have lit up the rugby pitch this autumn and have truly announced themselves as forces to be reckoned with on the international stage.

For South Africa rugby, a certain member of their team has also been making waves on the international scene.

Her name is Rene Naylor, the Springboks physio since 2008. Naylor has inspired a social media debate in the past 24 hours about the role of physios during rugby games.

In the wake of England's win over the Springboks in Twickenham on Saturday, Naylor has become talking point. On Twitter, a number of clips have surfaced from Saturday, which show her roaring on her team from the sideline, and in one instance, actually running onto the pitch to celebrate while the ball is still in play.

OK, better vision this time as the last video only had snippet of physio running onto the field. Again, genuinely interested in what ARs think. Does this influence their decision making? I doubt it would with all the noise but the microphone does pick up her screaming. pic.twitter.com/EU5v5mVbyb

It is not the first time Taylor has looked to influence a game from the sidelines. Her behaviour was on the minds of some rugby viewers during last summer's Lions tour.

It's clear Naylor brings real passion to her role and is a valued member of the Springboks coaching staff.

However, her behaviour Saturday inspired controversy with ex-players and pundits pointing out - in somewhat over-the-top language - that it is clear overstepping of the mark with the physio getting too close to the action.

Rene Naylor at it again. A constant menace, summing up the whole sorry mess of sickening cheerleaders masquerading as medical professionals on the sidelines.

The @Springboks are not the only team that do it, far from it, but they are by far the worst with Naylor the chief. https://t.co/Lbe51QFfKo

Why are you always pitchside shouting orders? You did it vs the Lions and @EnglandRugby. You're in the way.@WorldRugby when will you stop support staff from coaching teams and being on the pitch unnecessarily during live play?#Rugby #AutumnNationsSeries #Cheaters

Jamie Roberts called it 'berserk' on his Twitter feed. Many viewers noted that the assistant referee chose not to take any action, even though Naylor was right beside him.

It is the latest in a spate of recent controversies that South African rugby has been embroiled in due to some of their tactics both on and off the field. And it does feel as if they are trying to cultivate an us-against-the-world mentality to strive off.

Their Director of Rugby Rassie Erasmus was in hot water after going onto the pitch under the premise that he was a water boy during the recent Lions Tour, and last week he was banned for his video criticising referee Nic Berry during the same tour.

Unsurprisingly many South African fans have voiced their support for Naylor on Twitter, seemingly revelling in their moniker as the current 'bad boys' of test rugby.

People can come for Rassie, he has that trollish energy that sometimes crosses the line. But don't dare touch Rene Naylor on our studio! The whole of South Africa will come for you!

Zeez but you guys complain a lot. You all just jealous because you dont have a physio so passionate and beautifull as the Boks.
You go @Rene_Naylor ! LOVE your passion! 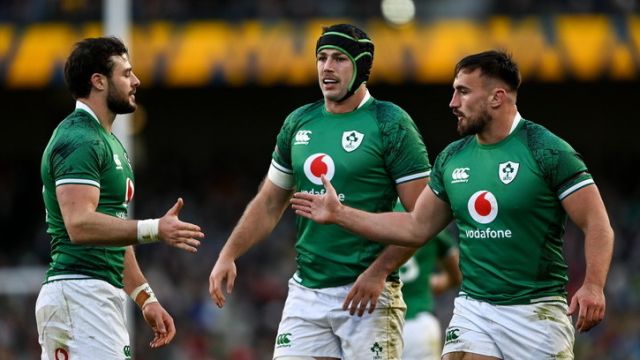