Irish Rugby's Next Superstar Is Ready To Capitalise On More Exposure

Ireland's dominant win against Wales in their opening Six Nations game was one of the highlights of a stacked weekend of sport. One player in particular stood out, as 19-year-old Connacht winger Béibhinn Parsons stole the show with two stunning tries. The youngster is quickly becoming one of  of the brightest stars of Irish rugby - and it's easy to see why with performances like Saturday's.

The Connacht player contributed two tries to Ireland's 45-0 win in Cardiff, with her sensational first try in particular grabbing the attention of Irish fans. Many pundits have commented on her eyebrow-raising performance against Wales, with RTÉ's commentators suggesting she was not a "star in the making" - she is already one.

What a try for Ireland from Beibhinn Parsons! #WALIRL pic.twitter.com/XoNsDB6uqw

Parsons was speaking this morning as part of the launch for Avonmore Protein Milk’s ‘Bring Your All’ campaign. She was in buoyant mood when discussing the Ireland team's chances going forward in to Saturday's crunch game with France.

Yeah. We’re a team with huge belief, I’ve always loved being an underdog, I think you’ve nothing to lose. We put a good marker down against Wales and obviously they’re a whole different opponent compared to – you know, France will bring a whole lot more to us. But, you know, we think that if we can get ourselves right and focus on us and have clarity on our roles and execute our own system, we can definitely bring it to France. 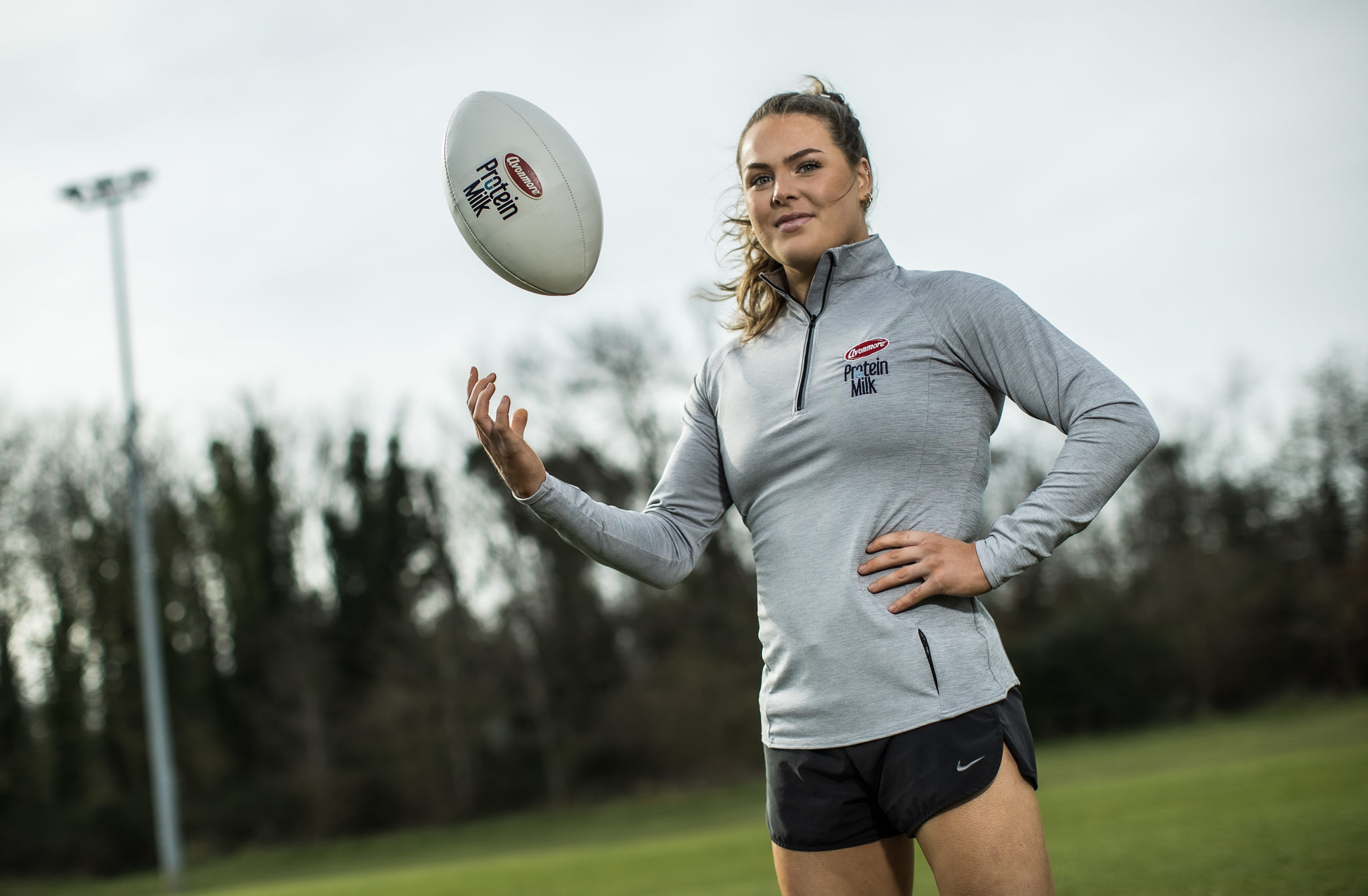 Parsons is still only 19 and was part of the infamous Leaving Cert class of 2020, who ultimately did not sit their exams and were given "predicted grades". It's been a roller coaster of a year for Parsons, who is now in her first-year studying in UCD. She's had plenty of support from all those around her, though, and she feels that she also gained respect from her teammates for her determination through what was a challenging year.

Throughout my Leaving Cert, it was definitely difficult. You know, keeping all balls in the air – quite literally! – but I’ve great people around me and I think it’s down to them. My parents were definitely supportive and when I just took a step back from international rugby, nobody stood in my way, everybody supported me. Even my teammates, you know, I think I actually gained a lot of their respect in doing that, so I’ve just had great people around me.

Right now I’m part of that Astra Academy in UCD and they’ve helped me academically, you know, sorting out deadlines and things like that. Rugby Players Ireland, they were right by my side throughout my whole Leaving Cert, so it’s not me it’s the people around me!

But it's not just Parsons who has faced adversity recently. The Irish team had not played together since October before Saturday's game against Wales, and have had to contend with a delayed Six Nations, a change of competition format, and the postponement of this year's World Cup (and its qualifiers).

New: Elite athletes are to be given an exemption from mandatory hotel quarantine - an exemption which will allow Leinster to travel to La Rochelle, the French women’s team to come to Donnybrook for the women’s 6N, and eases fears over golf’s Irish Open @VMSportIE @VirginMediaNews

Even now that the Six Nations is underway, there has been more confusion and uncertainty surrounding the Irish team. It was only confirmed today that the French team will indeed be allowed to travel to Dublin for this weekend's game, with the new quarantine rules throwing the fixture into doubt. Parsons spoke highly of the squad's ability to work through the adversity of what has been a chaotic and, at times, disappointing year.

I think one thing that sticks out to me is the resilience of my teammates. We found out that the World Cup had been postponed and the World Cup qualifiers were postponed – and then we went on and training for three hours right after getting that news. The girls were so resilient and I look at them and it’s so admirable.

I think when you’re surrounded by role models like that who conduct themselves so well, it’s easy to be in that environment and to thrive. They make the environment what it is, they don’t whine about postponements or cancellations, they really pull their socks up and get the work done, so I just try my best to keep up with them!

The Irish squad are clearly a tight-knit bunch, and Parsons says that they have been quietly building momentum and upping the stakes of their training sessions. The intensity of their sessions has been steadily increasing. Parsons put the Welsh win down to the improved training regime, and the winger from Ballinasloe in Galway is confident that they will continue to reap the rewards.

Our trainings have been like test matches and they’ve been test match-intensity and we’ve been aiming for that. With our GPS stats we’ve been trying to match test match quality or higher. So, because we’ve had so much competition within the squad and we’ve had inter-team matches, I think we were like a well-oiled machine, we were ready to go.

The mood around the Irish team is hugely positive after the opening weekend, with such a dominant win - over an admittedly poor Welsh team - giving fans and players alike hope that the team can put it to France this weekend. 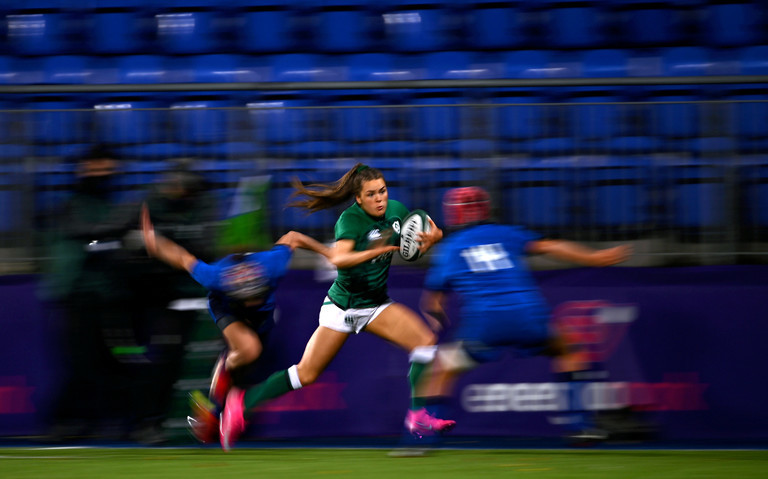 The game against Wales had to contend with time-clashes with a Champions Cup quarter final for Leinster, as well as Rachael Blackmore's sensational win in the Grand National. This weekend's game against France, however, is unobstructed in the schedule - and Parsons is eager to capitalise on the expected increase in viewership.

We welcome it. I welcome it with open arms, I love it – bring it on! If there’s more people watching and we’re sort of creating a fanbase and keeping young girls in sport and they’ve role models to look up to, that’s a great thing in my eyes. You know, yeah, there might be an added pressure and, you know, definitely, there is more accountability there and there’s a lot of people watching, but I welcome it with open arms definitely.

These are exciting times for Irish rugby, and Parsons is certainly the young superstar of this team. Somehow, she has been a part of the senior set up for three years now so, despite her age, she is one of the senior members of the squad. She certainly has not let the talk and expectation weigh her down - or go to her head.

I’m still learning a lot and I’m just trying to prove myself to my teammates, I think they are trusting me more and they might be passing me more ball and I’m getting my hands on the ball more. But I still have a lot to learn, there’s a lot of facets of my game to improve so I don’t know if I’m up to scratch yet.

This Irish team still has a lot to offer, and all eyes now turn to Saturday's massive game against France - Parsons says the team "can't wait" to take on the might of the French team. We can't wait either and, if the performance matches the confidence of Parsons and the squad, we could be in for a shock at Donnybrook. 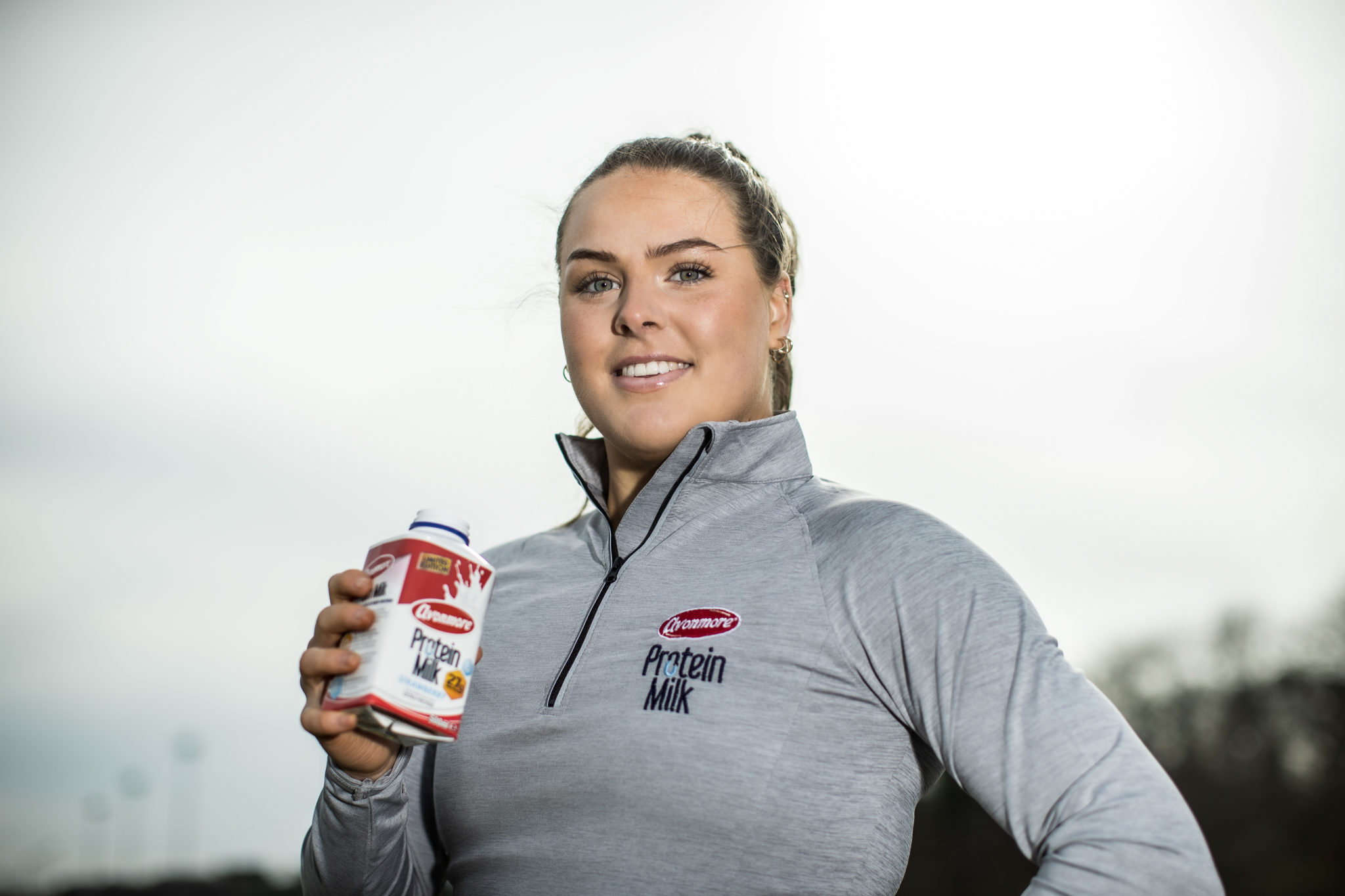 Irish & Connacht Rugby player Beibhinn Parsons has teamed up with Avonmore Protein Milk as an ambassador to launch the new ‘Bring Your All’ campaign, which highlights the ‘positive, committed and never give up’ spirit within all of us involved in sport or exercise. 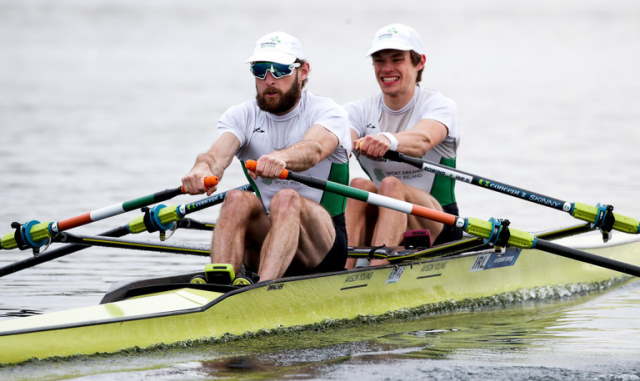