The possibility that he might one day play club rugby in Ireland was always there as a thought in Billy Burns's mind. It became a reality during the summer when Ulster came calling.

It was a handy confluence of events for Burns. Following Gloucester's defeat to Cardiff in the Challenge Cup final last season - a game he started at out-half - Burns was called in by director of rugby David Humphries and head coach Johan Ackermann - they had signed Danny Cipriani.

"It was a tough one to take at first, but this opportunity was always there [moving to play in Ireland] and it was one that I was seriously thinking about and it was probably sort of the nail in the coffin, in that it was a good chance to move on and go over here and challenge myself," Burns said at an eir Sport Guinness PRO14 event.

Even if his move had not been ushered along by the Cipriani signing, Burns - whose brother is England international Freddie Burns - says he still would have ended up in Ireland one day.

His Irish connection is through a grandfather from Cork.

"I have a lot of family in Dublin actually, so we used to come over as kids and spend a lot of time over here, so yeah my old man was very proud of me when I made the decision to come over here for sure." 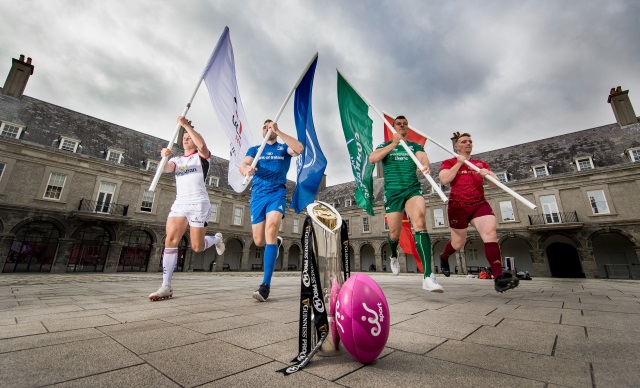 The Bath-born ten has not yet had a chat with Joe Schmidt regarding the possibility of playing for Ireland. That may come in time. For the moment, he's concentrating on why he moved.

There was an article that was released and almost made it sound like I was coming here just to play for Ireland. First and foremost I'm coming over here because I want to play for Ulster Rugby and push Ulster back up and play well here.

Anything else that comes would be great. Obviously, I have ambitions to play international rugby. You probably hear it all the time but any player at this level has that ambition.

Talks Burns had with Ulster assistant coach Dwayne Peel about the type of rugby they want to play next season have excited him.

Burn feels he has plenty to offer. Even aged just 24, he has far more experience than other out-halves at Ravenhill.

"I've had a fair bit of experience, albeit playing in a different league, but obviously like you said the likes of Johnny (McPhillips) and Mike (Michael Lowry), they're great players but probably lack that little bit of experience so I think that is something that I can hopefully help the side with.

"I’ve always been a guy who likes the ball in my hands, who likes to try to make things happen. I think probably with age I’ve had to pull back on that a little bit. It’s different when you are a 20, 21-year-old coming around, you’re energetic and you just want to play with the ball, it’s not the best for the team sometimes and I probably learned that.

"I think just for me, over the last couple of years it’s just balancing that game up. I’ll always have that natural thing in me that wants the ball in my hands but it’s just about finding that balance, what’s best for the team and what also suits me as a player as well."

Pictured at the eir sport announcement that its first broadcast, Cardiff Blues v Leinster will be made free to air to celebrate the channel becoming the NEW home of rugby in Ireland is Susan Brady, Managing Director of Consumer and Small Business with Ulster Rugby’s Billy Burns, Leinster Rugby’s Jack Conan, Connacht Rugby’s Robin Copeland, and Munster Rugby’s Rory Scannell.