Analysis: Four Reasons Ireland Look Like One Of The Best Sides In World Rugby Right Now

As a nation, it is incredible what we do on the world’s sporting stage. As supporters, we ask our athletes to test themselves against the best, and while our teams don’t always win, we will give them our support as long as we see the effort of performance. Kellie Harrington, Paul O’Donovan and Fintan McCarthy had to do it without the noise of the passionate Irish fans, while last week our football and rugby teams took on the best in the world and we as fans got to once again scream our hysterical support at our sporting heroes.

And what a performance we had to cheer, as Ireland took down New Zealand in such clinical fashion. Andy Farrell’s men produced their best performance in some years, to record a 29-20 win.

Here's a look at how they did it.

While teams like England (Ford/Farrell or Smith/Farrell), France (Jalibert/Ntamack), New Zealand (Barrett/Mo’unga) operate with 2 playmakers in their teams, Ireland has resisted the move to such a system simply by interchanging the 1st and 2nd receivers within their attack structure. In the early days of Farrell’s reign, Ireland’s attack did not cause too many problems for most team's defences. The message among international coaches was simple:  shut Sexton down and you will shut down Ireland’s attack. Ireland’s attack now uses a multi-layered approach using the likes of Ringrose, Lowe and Keenan supporting Sexton within the attack structure.

The general attack shape involves a 1/3/2/2 shape with Sexton playing inside a group of 3 forwards (who generally has Furlong as the main passer within that attack group).

Though off the edge rucks, Sexton will play behind the group of 3 linking to the next group of 2. 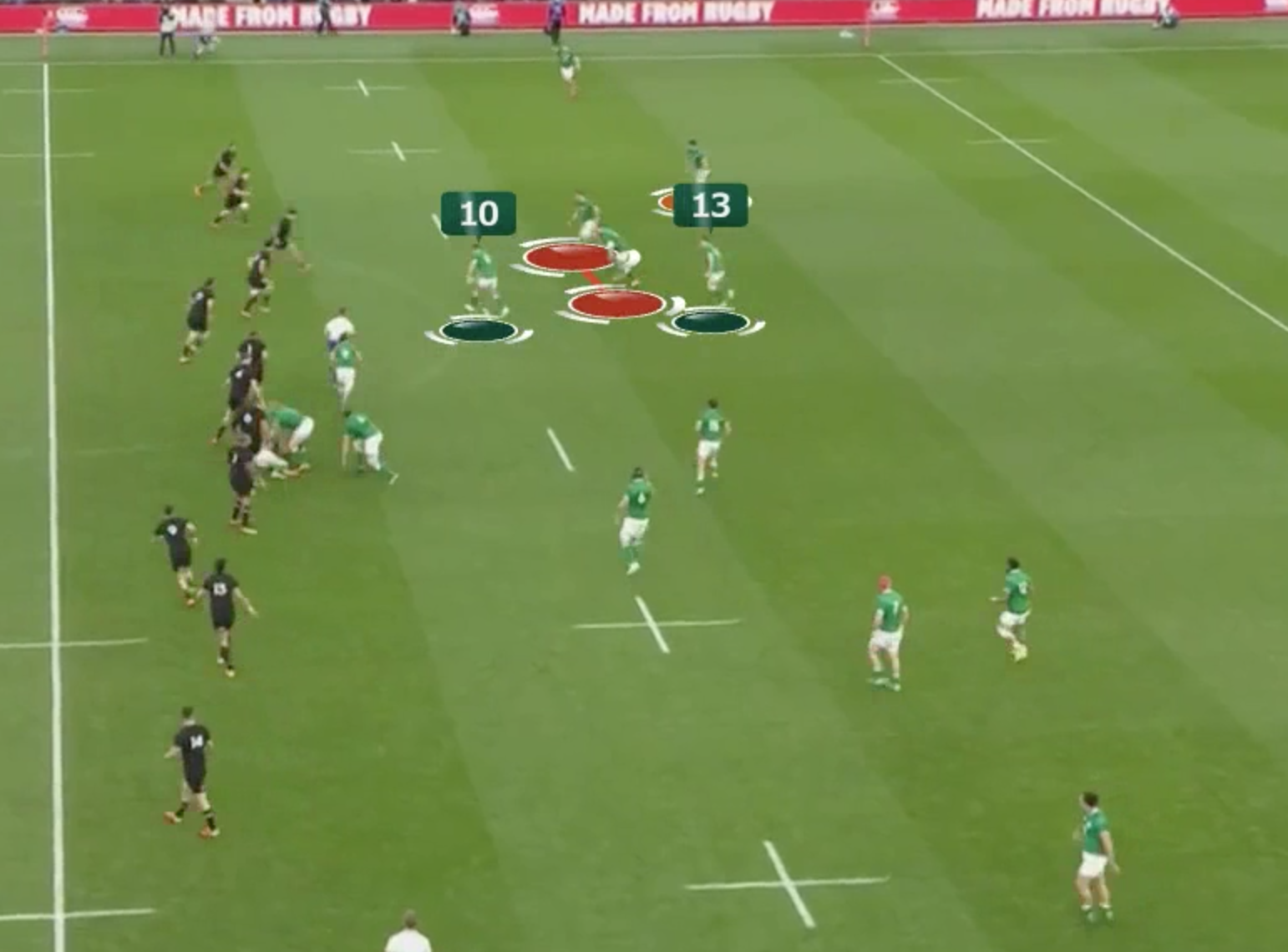 After playing the group of 3, Sexton is now ready to attack with the outside group of 2 with Ringrose in behind. 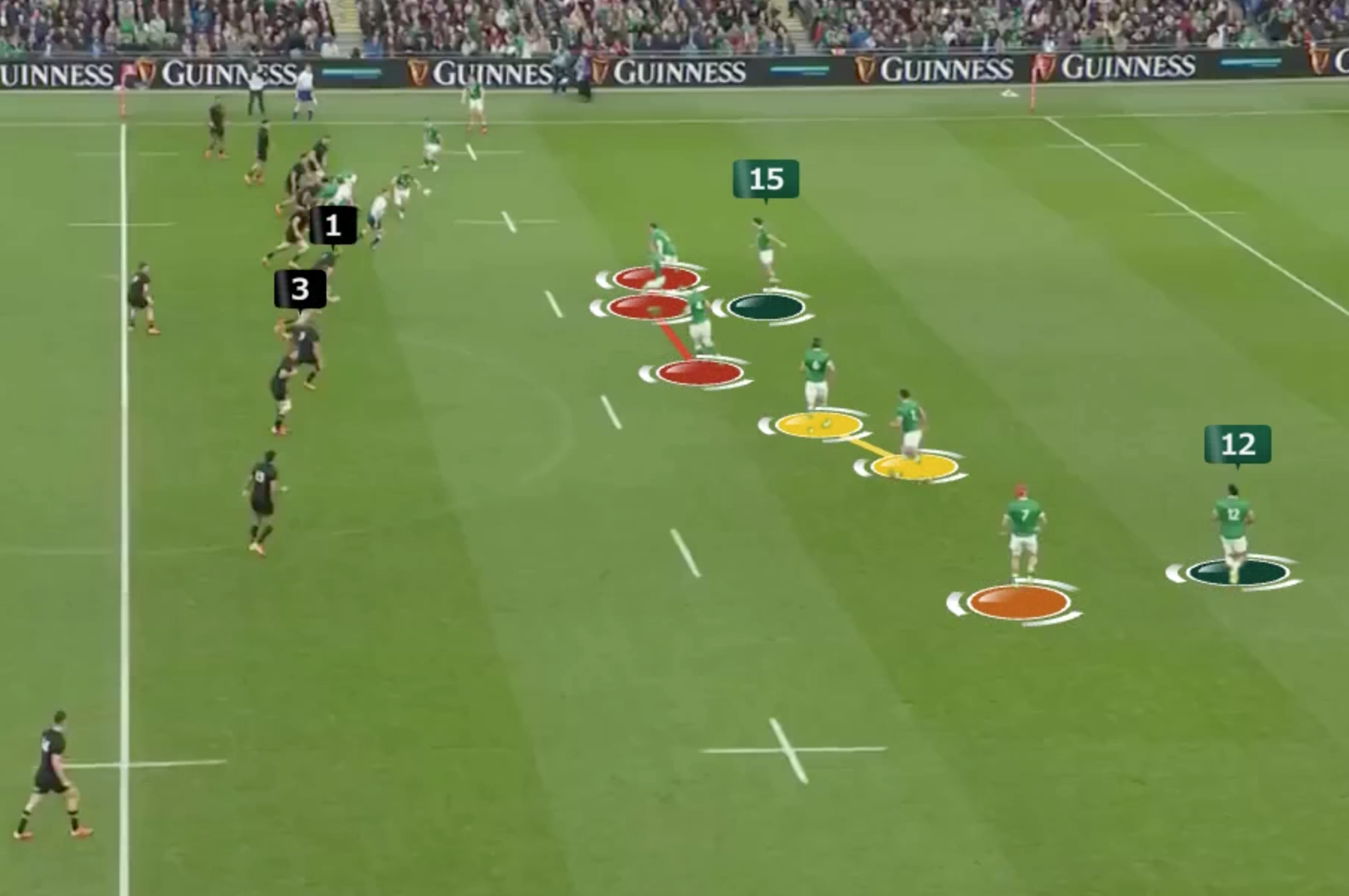 On the return of this attack the groups remain the same (3/2/1) but this time Keenan is now organising the attack. 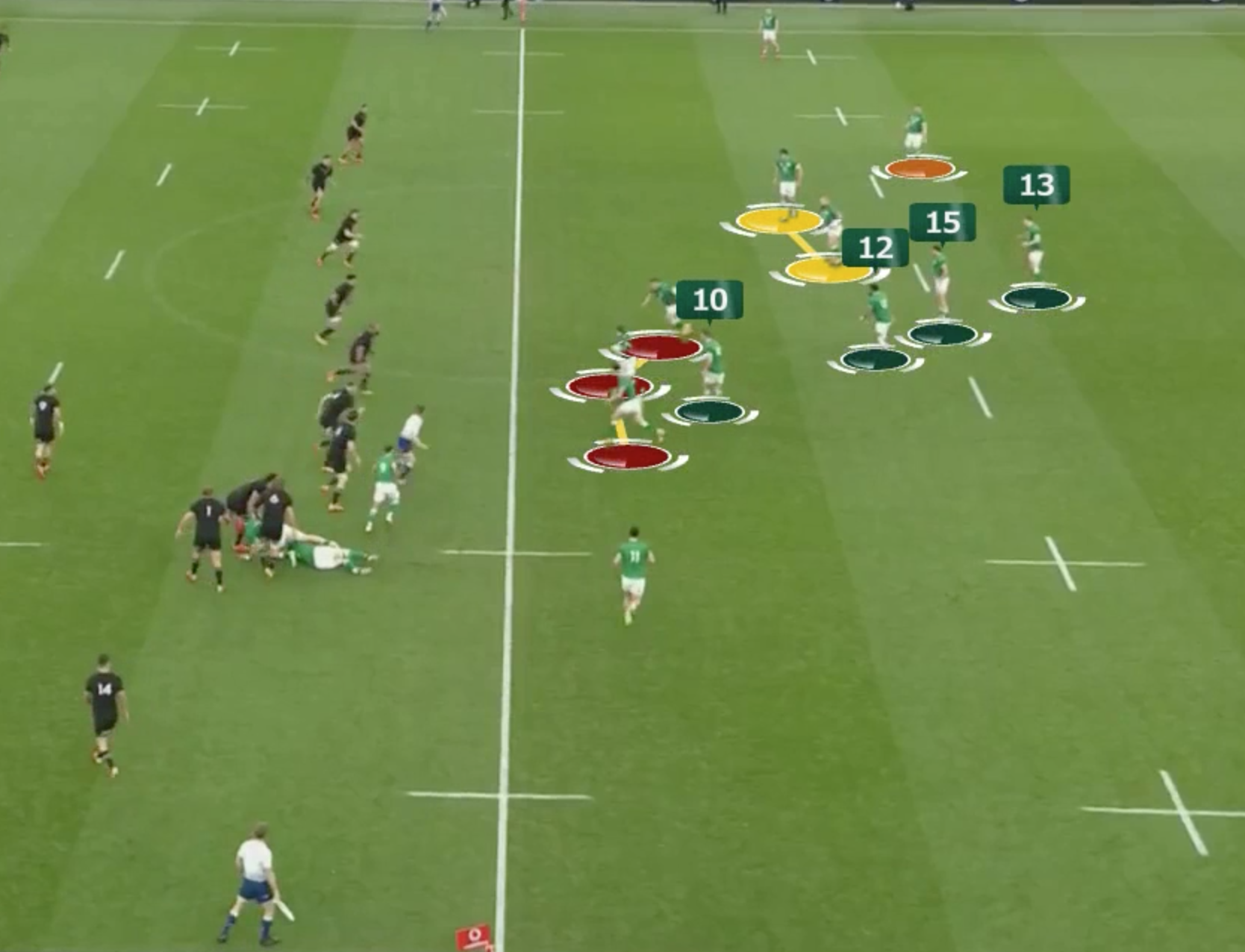 The attack shape allows the team to play direct (go through) or play wide (go around) by having various little micro plays within the shape. 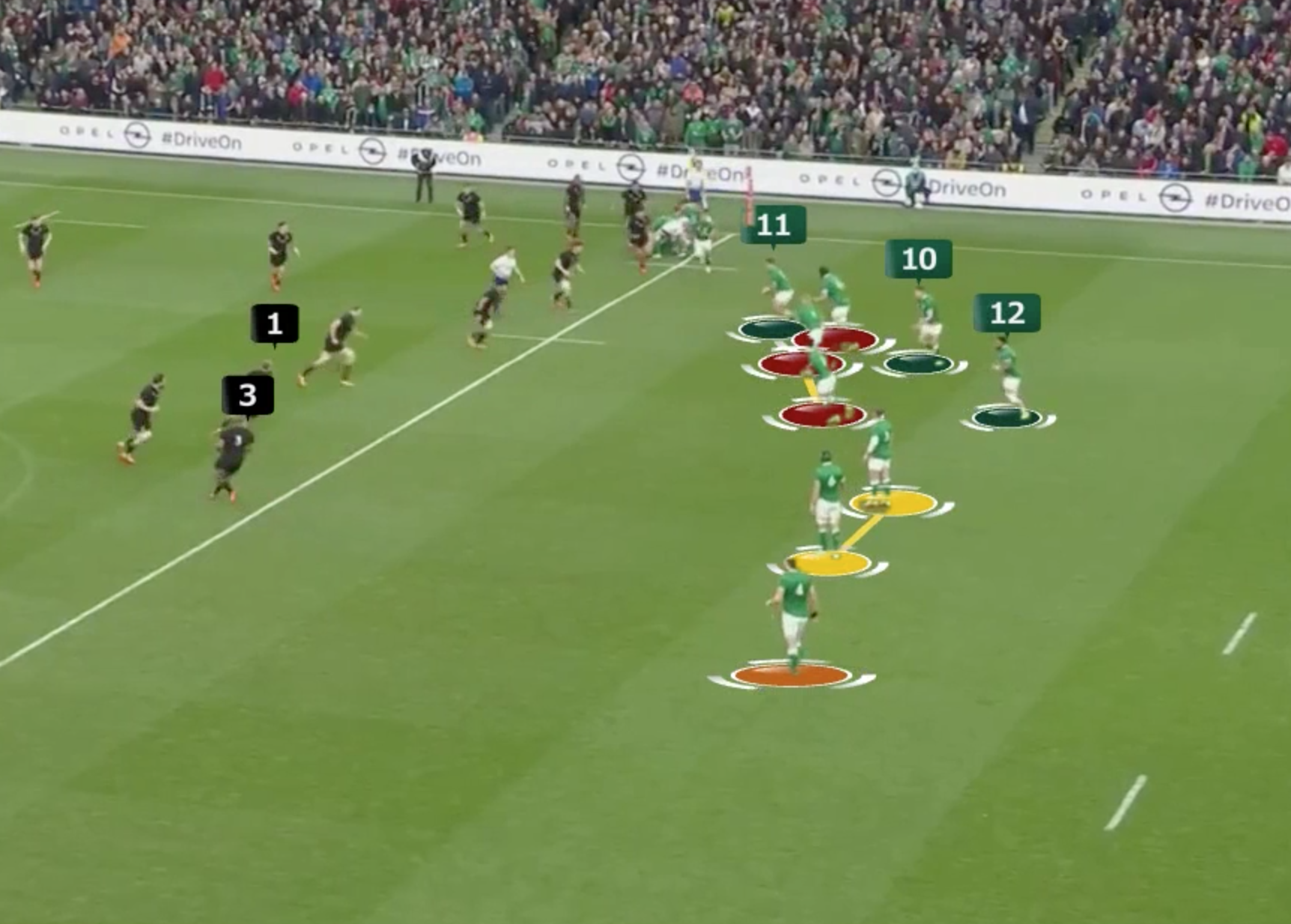 Lowe is also used as first receiver in certain situations that allow Sexton to play wider and link to the two-man attack group that are aided by Aki. 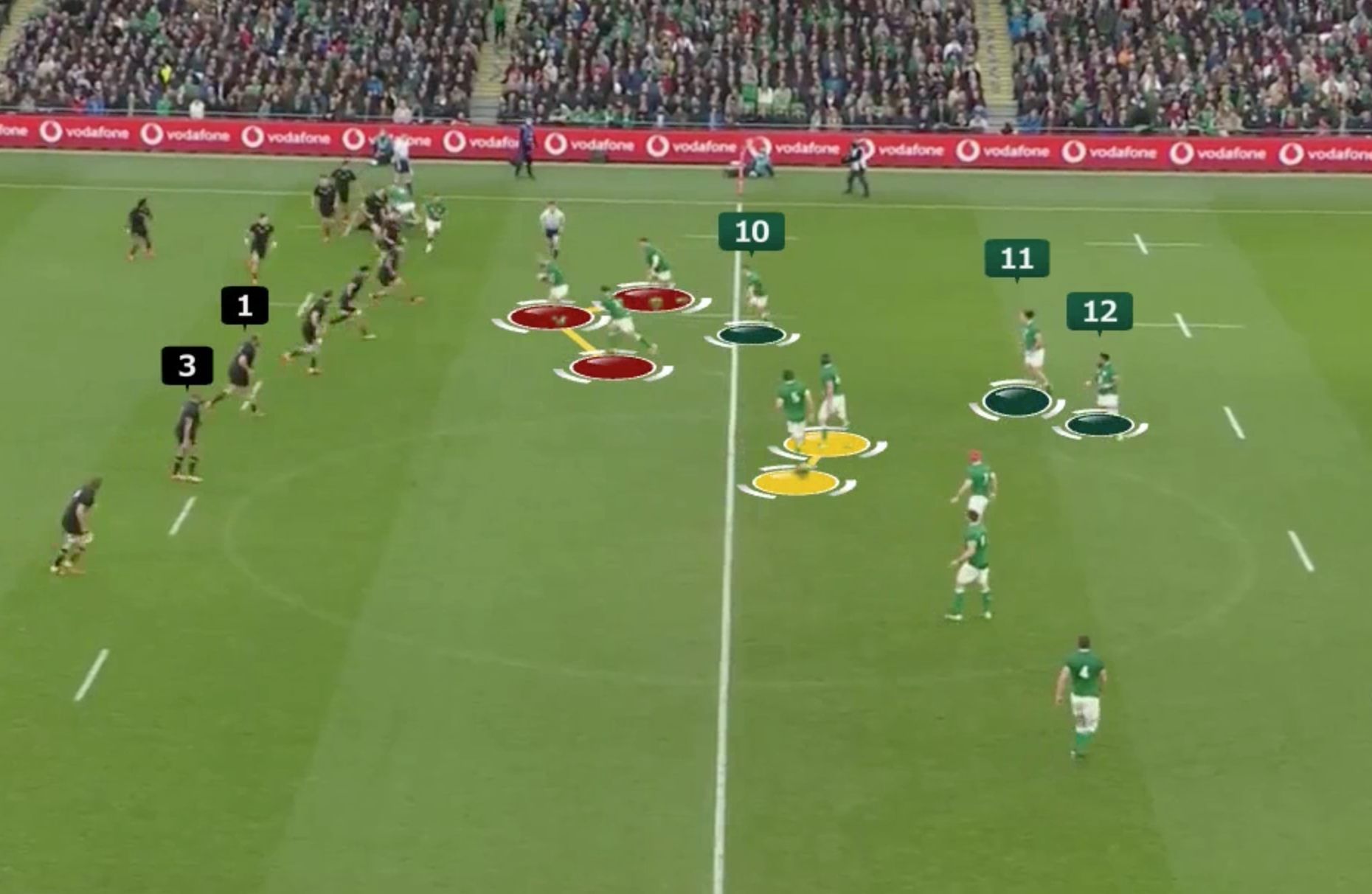 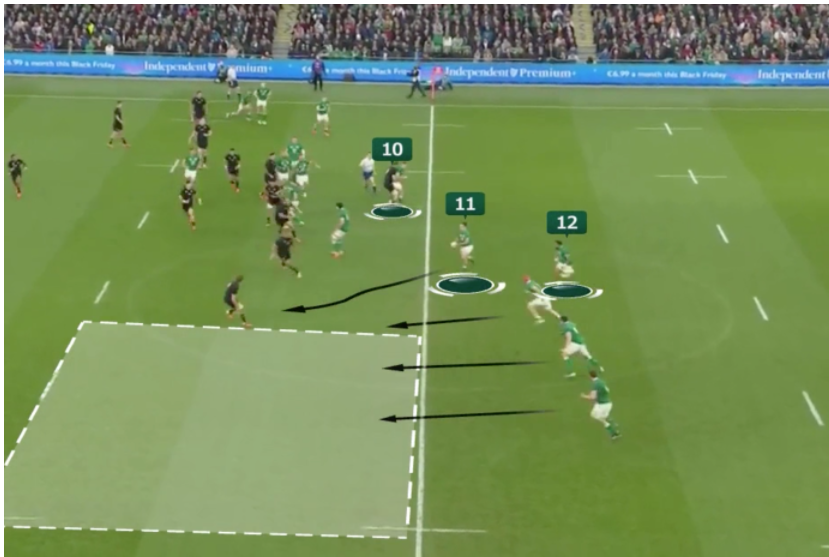 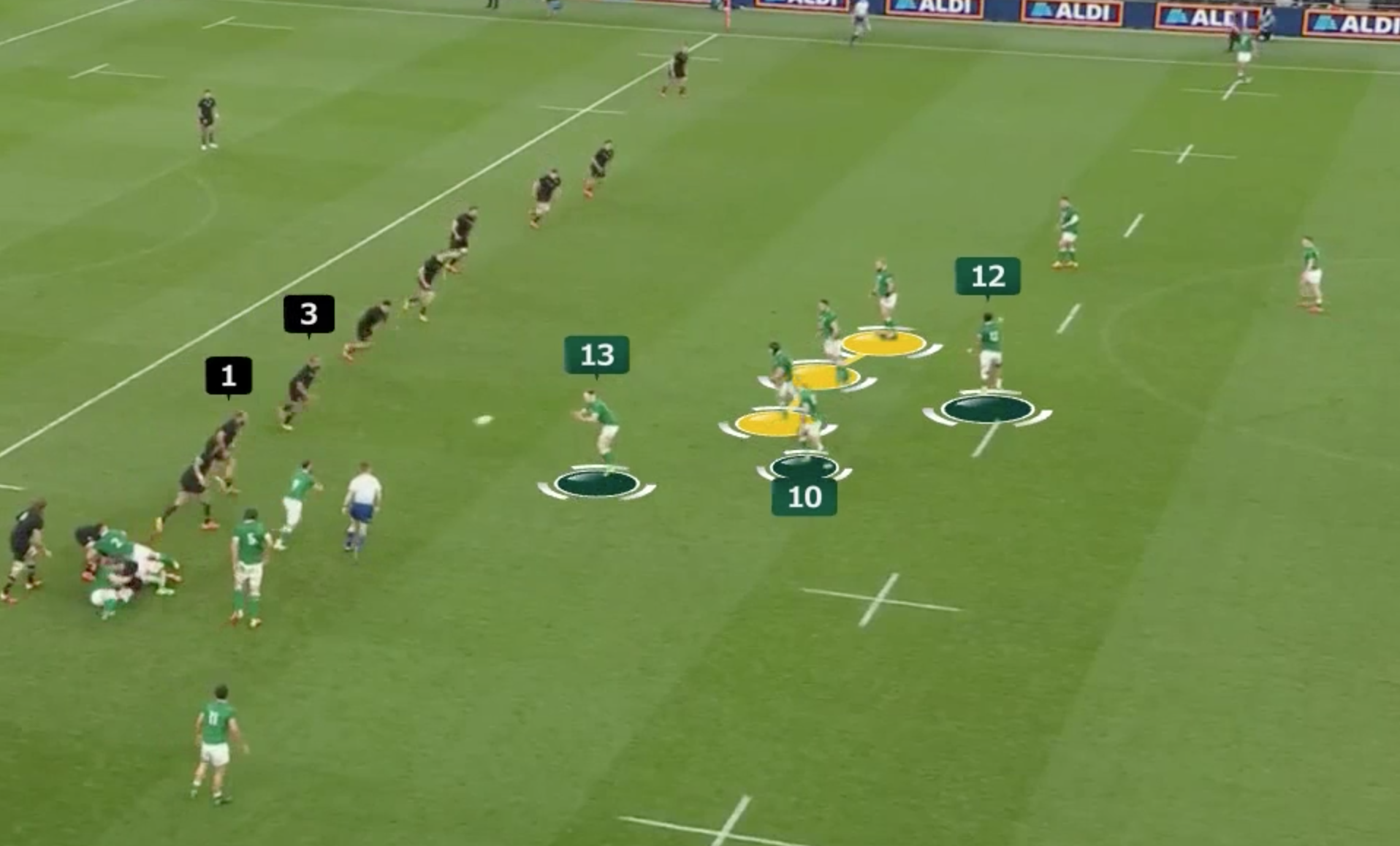 Ringrose and Keenan also looked to get into that first receiver position as Ireland clearly targeted New Zealand’s props who defended together in midfield within the New Zealand defence structure.

When the team sat in their team hotel post-game with a Zoom call from Joe Biden, the bodies must have been aching. To a man, these Irish players put their bodies on the line with the countless number of incidents within the 80mins.

The most astonishing moment of effort came in the 10th minute after New Zealand got in behind the Irish defence. With Jordie Barrett about to cross for what looked like a certain try, Andrew Conway sprinted from the far wing to position himself opposite the New Zealand full-back. Garry Ringrose, who looked in no position to assist his teammate, wrestled away from Rieko Ioane to make sure Barrett did not cross the line. The power and ferocity of the double hit could be felt by the whole crowd in the Aviva on Saturday afternoon.

The hit on Barrett by Ringrose & Conway was just incredible effort. Ringrose fought so hard to free himself to make the hit #IREvNZL pic.twitter.com/VzECykUxVv

For the past 20 years, the thinking behind Ireland’s Lineout defence has always been of the highest order with players like Davidson, O’Kelly, O’Callaghan and O’Connell being the thorn in the side of most lineouts throughout the rugby world. Hours of analysis by Mervyn Murphy and detail from coaches like Niall O’Donovan has always created a strong lineout defence culture within the national team. With Paul O’Connell now moving into a coaching role, it has certainly reached new heights. Saturday’s lineout defence was just outstanding. 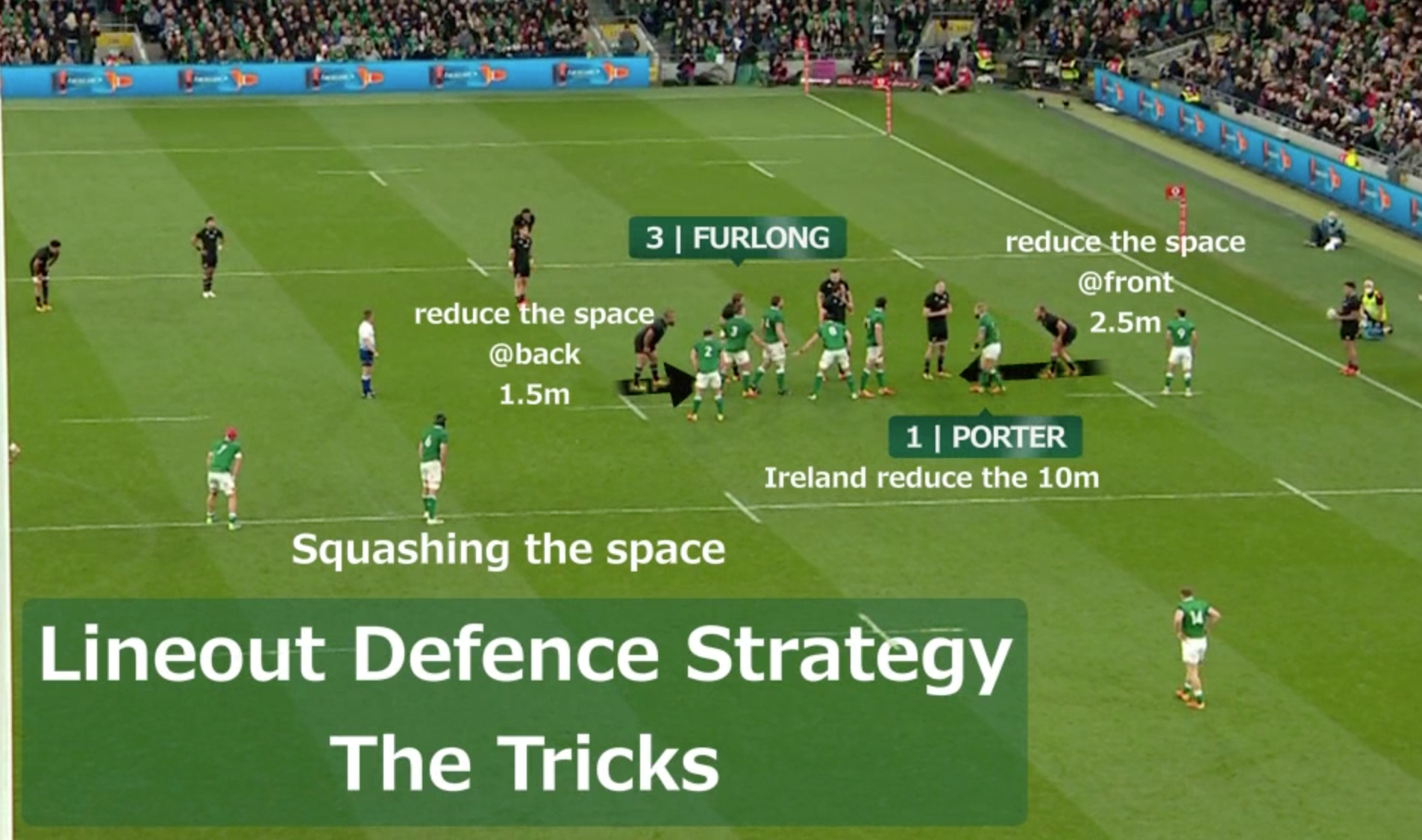 A key part of the defence strategy was to squash the middle of the lineout by reducing the space at the front and back of the lineout by positioning the props off the 5m and 15m lines. Using the movement and athletic ability of James Ryan and Iain Henderson, they dictated where New Zealand could win the ball. However, not content with “giving” New Zealand the front, Ireland were prepared to disrupt the quality of every piece of possession they had.

What a performance by the young Leinster backrower capped off with a superb try. Having won the lineout himself, he quickly positioned himself on the 3rd phase to get the ball off Gibson-Park to step and power past Codie Taylor to score under the posts to give Ireland the lead on the 51st minute. 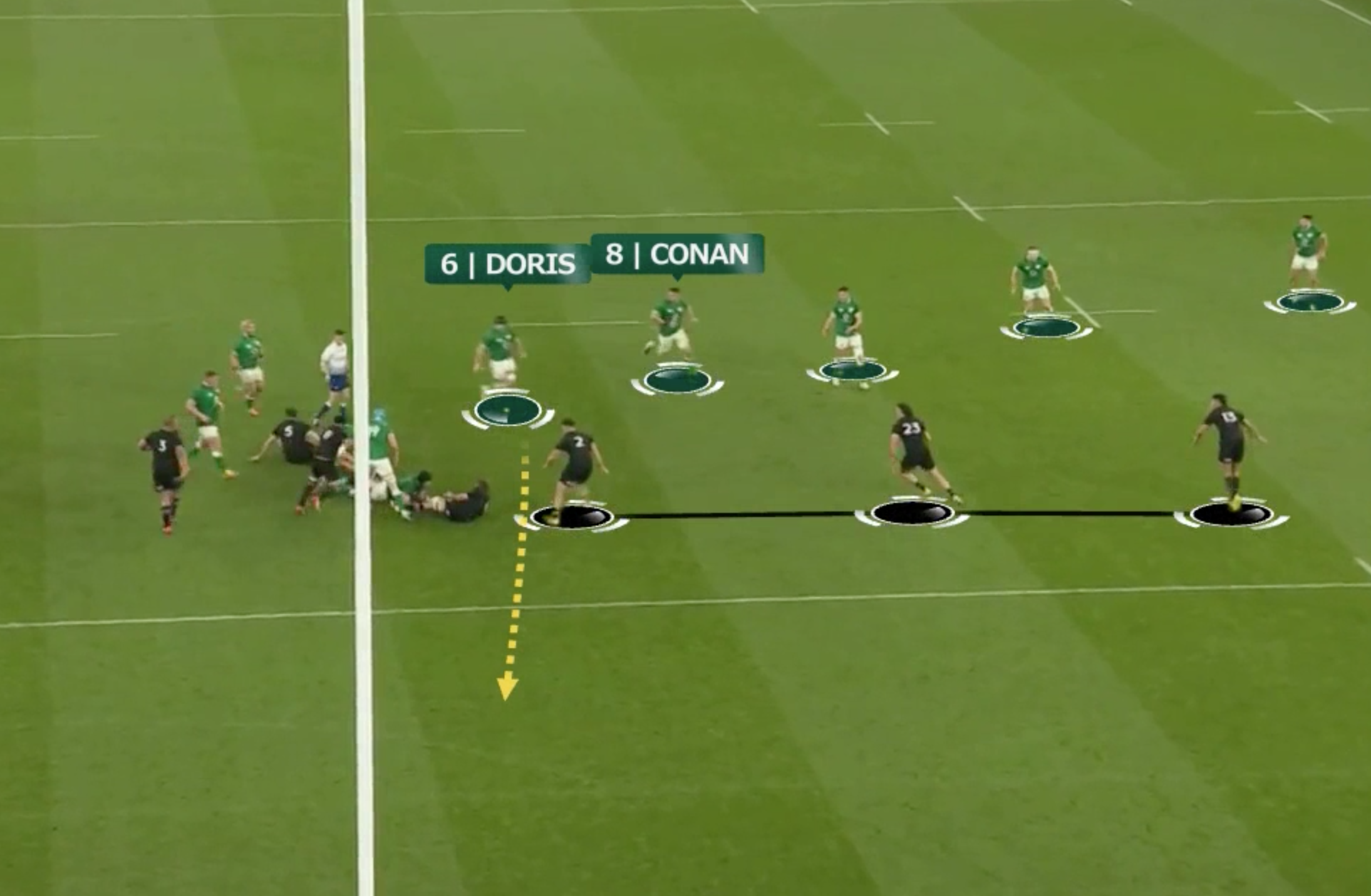 We'll be watching this Doris try for years to come. He won the Lineout & great Feet/Fight & Finish. Great clear out by Ryan and Carry by Kelleher. #IREvNZL #autumnnationseries pic.twitter.com/MZxVUyzSnH

Where to next for Ireland after such an epic performance and with the last Autumn Nations Series against Argentina on Sunday. While the public celebrated the win, the team will look to push on in their preparations for a tilt at the Six Nations. An area that needs attention is the 22m attack, where Ireland had 19 visits (62 rucks) in the opposition’s 22, with Ireland conceding 9 turnovers in that zone in the first half, scoring just 1 try. There is a need to restructure what happens in this part of the field to give the team better outcomes from this prime field position. It would be great to see a few more of the players outside the starting 15 get opportunities to show what they can do against quality opposition. With Sexton out, Carbery will start with Byrne to deputise.. Adding to the depth of the playing pool has to be a priority with players like Casey, Coombes, Sheehan and Frawley all ready for action.

Rugby
1 month ago
By Colman Stanley
Joe Schmidt Looks Set For New Coaching Role With All Blacks
Rugby
2 months ago
By Michael McCarthy
Ireland's Best Novembers And How They Fared In The Following Six Nations
Rugby
2 months ago
By Colman Stanley
All Blacks Hooker Dane Cole Explains Why They Couldn't Keep Pace With Ireland
Popular on Balls
Basketball
11 hours ago
By Eoin Harrington
Kieran Donaghy And Tralee Warriors Claim National Basketball Cup Title In Tallaght
Rugby
15 hours ago
By Colman Stanley
Jimmy O'Brien Announced His Arrival On The Biggest Stage This Afternoon
The Rewind
19 hours ago
By Gary Connaughton
Quiz: From Which Irish County Did This Company/Product Originate?
Football
22 hours ago
By Gary Connaughton
Carragher Reveals Unhappy Instagram Message From Lionel Messi After MNF Comments