Many have been looking back fondly on Ireland's performance in their victory over the All Blacks on Saturday.

While a win over the world's greatest is sweet enough in itself, it was the overall Irish efforts that provided much optimism.

Speaking after the game, RTÉ pundit Jamie Heaslip said "we won it our way" and that "we dominated playing the way we play."

Former Ireland head coach Eddie O'Sullivan described it as a "benchmark" for Ireland, saying "the score didn't reflect our dominance."

Kinda sums up what Ireland did to the All Blacks yesterday.

Codie Taylor and Dalton Papalii see themselves on the big screen here but can't hide the pain! pic.twitter.com/rGUuYPosUF

The pace of the game was ferocious from the get-go. Ireland chipped away at the New Zealand defense for much of the game, as the visitors tried to catch Ireland on the break.

Regarding some of the standout statistics from the game, Ireland legend Brian O'Driscoll reckons our tackles made discrepancy paints the bigger picture.

On paper the All Blacks tackle count could suggest that they played much of the game on the defensive, trying to keep Ireland at bay.

In turn, Ireland's low tackle count could point to the fast-approaching nature of New Zealand's tries in the game, and their attack being stifled before it got going.

Statistics of previous meetings of the sides show a stark difference. New Zealand's 32 point World Cup victory in 2019 saw 145 tackles made for the winners and 147 for Ireland.

The infamous win at Soldier Field in 2016 saw 135 tackles made by Ireland, and just 97 made by New Zealand. All three games show much different numbers.

The ability to control the possession against the All Blacks was something unique for Andy Farrell's side.

SEE ALSO: James Lowe Had A Message For His Critics After New Zealand Victory 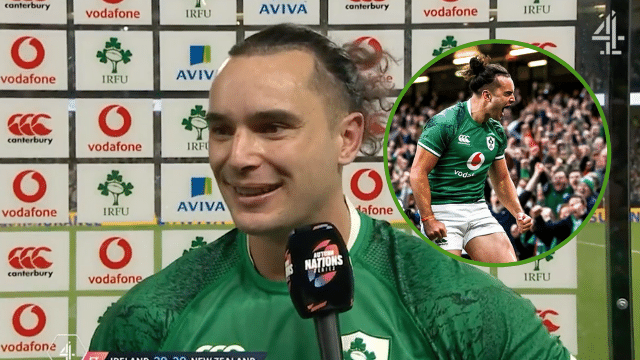