After a big second half last week, the Lions would have been expecting to build on that performance during this evening's second test.

That's not how things materialised.

The tourists were flat against the South Africans, failing to match their physicality while also lacking the creativity required in attack. In the end, the 15-point winning margin was a fair reflection on the 80 minutes.

Of course, the main talking point ahead of this game centred around the officials. South Africa were hugely unhappy with how last week's game was refereed, with both Rassie Erasmus and Siya Kolisi publicly expressing their concerns.

They likely won't have similar complaints about this game, with the referee giving the home team one very favourable decision to award a Lukhanyo Am try in the second half.

Could Erasmus' mind games have had an impact on that? Bryan Habana believes so.

Speaking on Sky Sports after the game, the former winger said that his mind games in midweek potentially had an impact on the officials.

Did Rassie's thing work by taking the pressure off the team to focus on how they want to play? When you beat the Lions by such a big margin in the second half, something definitely worked...

Without a doubt it worked. In the first 40 minutes you saw a lot of stop starts, questioning the referee, with every little detail going into that 'is it, isn't it'.

It was a messy first 40, we all know that. As the Boks found their ascendancy in the second half, it became a lot easier for the officials to make the calls.

That is something that Warren Gatland did with Marius Jonker two weeks ago, what Rassie did this week with putting the pressure on the referee in being intense and under the microscope.

I'm not saying it's right, but it potentially worked out with that Am try.

We imagine there will be plenty more of this sort of thing from both sides in the buildup to next week's deciding test. 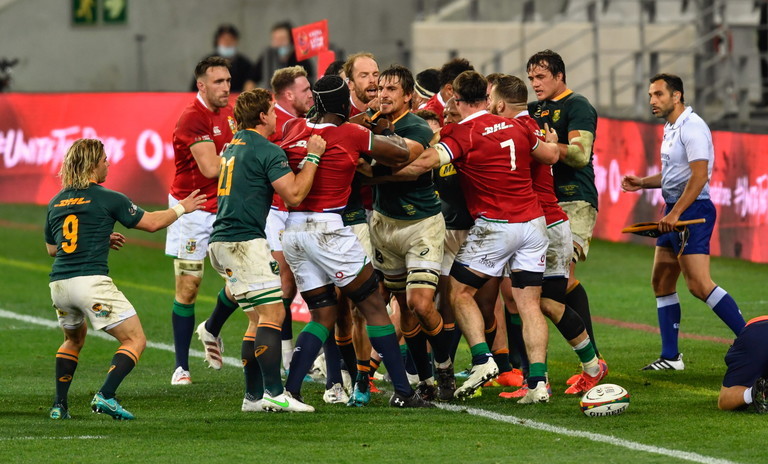