Munster's impressive Pro14 victory over Cardiff last weekend was built on a solid set-piece. A 100% strike-rate in the scrum and line-out is telling.

A huge amount of this is thanks to clarity and good coaching. A team needs to know what to do and how to do it.

This is not an individual understanding but a collective one. A unit in tune and well-briefed. Munster will know what their opposition and fans do not. They have the answers when everyone else has questions.

One big question that came out of last Friday's game in Irish Independent Park is a particularly entertaining one.

Why the hell do Munster keep shouting 'Oompa Loompa'? 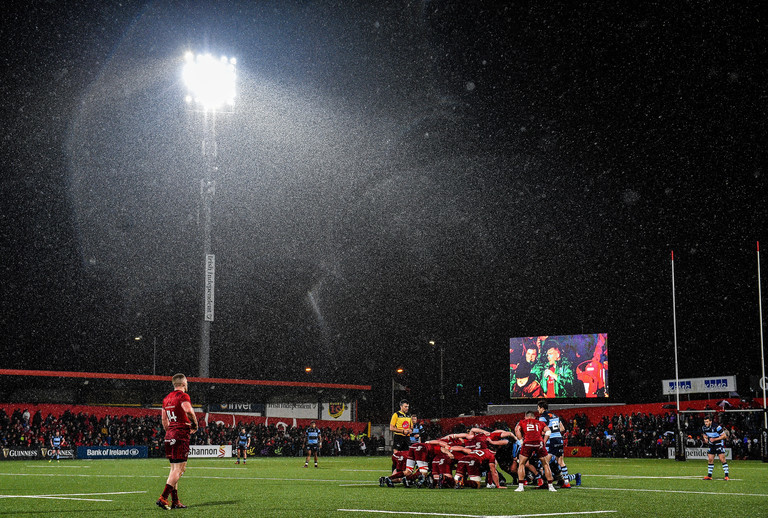 In an increasingly organised and pre-planned game, audible calls are becoming rare. It's not often you hear a team shout a random phrase that clearly indicates a move off the training ground. However, it still does happen in the set-piece.

Anything that can be planned for should be. Planning ensures cohesion. A team should drive, not dwindle.

Johann van Graan's gameplan is set-piece orientated. Scrums and line-outs are ideal opportunities for go-forward ball and a much-needed platform.

'Oompa Loompa' is also a simple Munster call. It was first heard twice in quick succession just after the half-hour mark. Munster had a scrum in their own half which initially had to be re-set. During the first failed scrum, Liam Toland remarked on commentary about number 8 Arno Botha's bind.

"Botha has detached his hands. He's not even binding. He's got one thing on his mind."

Just before the feed, the call is made loudly. First, they call for the second-row to bind, then 'Oompa Loompa.'

For the re-set scrum, Botha picks from the back and breaks right. Again, the call can be heard.

Botha then makes a huge gain and storms into Cardiff territory because openside Olly Robinson does not react quick enough. 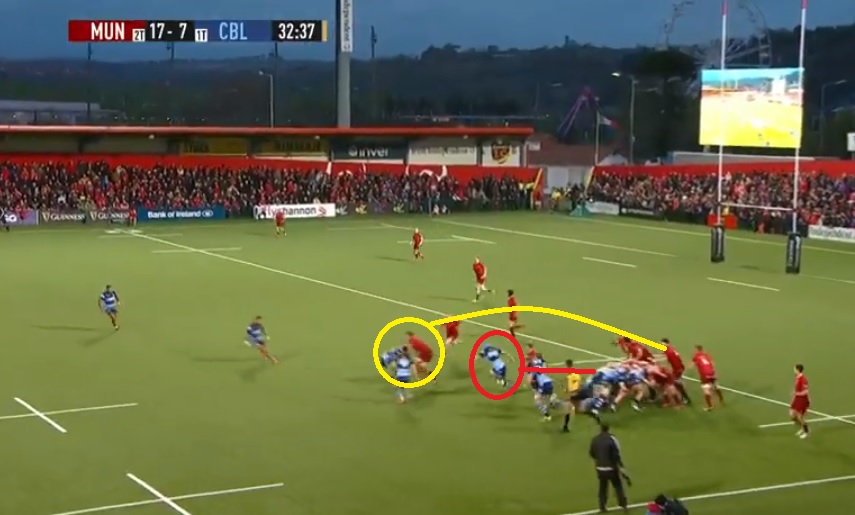 Just before half-time, Munster once again have a scrum in their own half. Again, they call 'Oompa Loompa.' This time, Tomos Williams clearly shouts to referee Marius Mitrea: "He's not bond!" 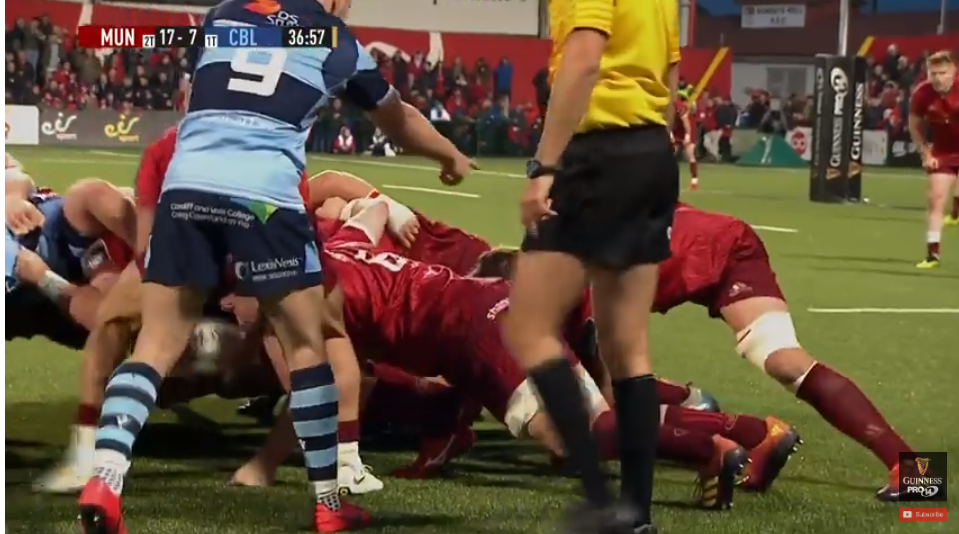 The referee then clarifies his interruption of the scrum law. "It's enough to me if he has his shoulder."

The commentary team suggest Botha is not bond and it is questionable under World Rugby laws. Outside of a prop, hooker and lock, all other players must "bind on a lock’s body with at least one arm."

Here's where Cardiff fail themselves. It is clear Munster have a pre-planned tactic, it is clear they are aware of it as Williams noticed Botha's bind. Yet their openside is packed down to help the scrum push and not breaking quick enough to counter it.

A flanker should be ready to react, like a sprinter in the blocks.

When you compare their openside's defensive position to Munster's Chris Cloete, the error is obvious. Cloete is ready to break the second the ball leaves the scrum. 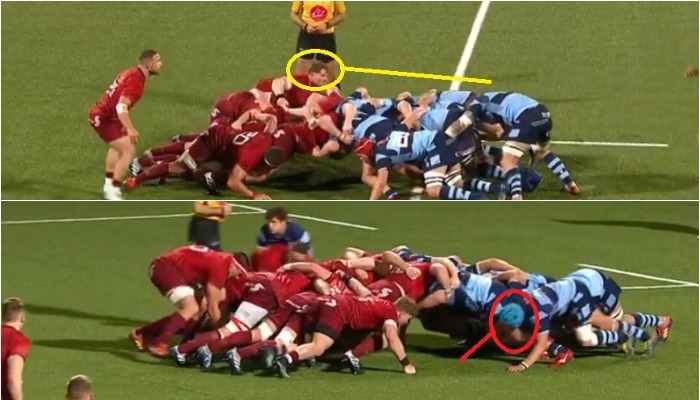 Half-time is a good opportunity to correct this. Yet Cardiff don't and Munster punish them.

Early in the second half, Botha is replaced by CJ Stander. This is irrelevant. Everyone is in sync and knows the call.

Shortly after the hour mark, Munster get a penalty and go to the scrum. Once again, the call is 'Oompa Loompa!'

Cardiff do not react. Their back-row once again fail to get up in time. Stander breaks and very nearly scores a try directly from it. A phase later Andrew Conway scores a try and ensures a comfortable victory. 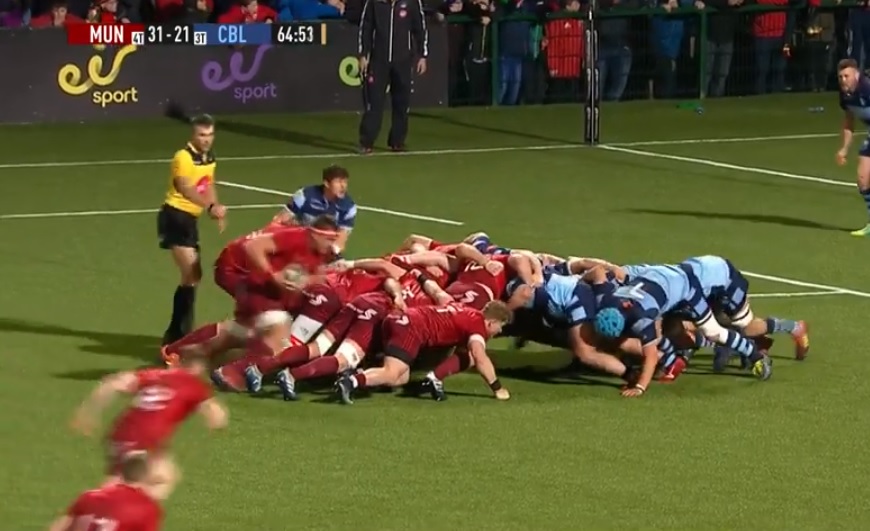 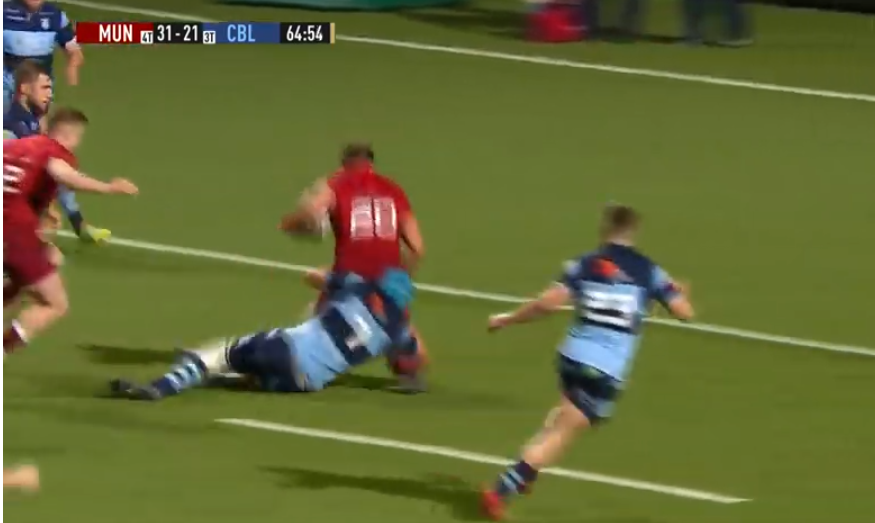 Andrew Conway goes in at the corner, and Tyler Bleyendaal kicks the extras from the touchline.o#MUNvCBL #GuinnessPRO14 pic.twitter.com/fqURy58wlq

Smart, simple and most significantly, effective.

It's not only at scrum-time where Munster out-thought Cardiff. In the line-out, they had clearly done their homework.

Midway through the game, Cardiff started to throw the ball to the front man with no jumper. Munster forced them to adapt by disrupting ball earlier in the game.

As the Six Nations demonstrated, teams are now planning their opening few minutes. Both England and Wales hit Ireland early with moves directly from the kick-off. Last weekend, Munster did similar.

After receiving kick-off, Munster exited with a Conor Murray box-kick to touch. This presented Cardiff with the game's first line-out.

Peter O'Mahony cleared knew the Cardiff play. Pay close attention to his line of vision and footwork here, tracking the jumper, getting up and intercepting.

Cardiff's play is a relatively straightforward one. A back-row stands in as scrum-half, the jumper goes up at the front and takes it down for him to latch on and set up a maul.

Back-row Nick Williams stood in as scrum-half, the ball went to the front and Cardiff set up a maul. 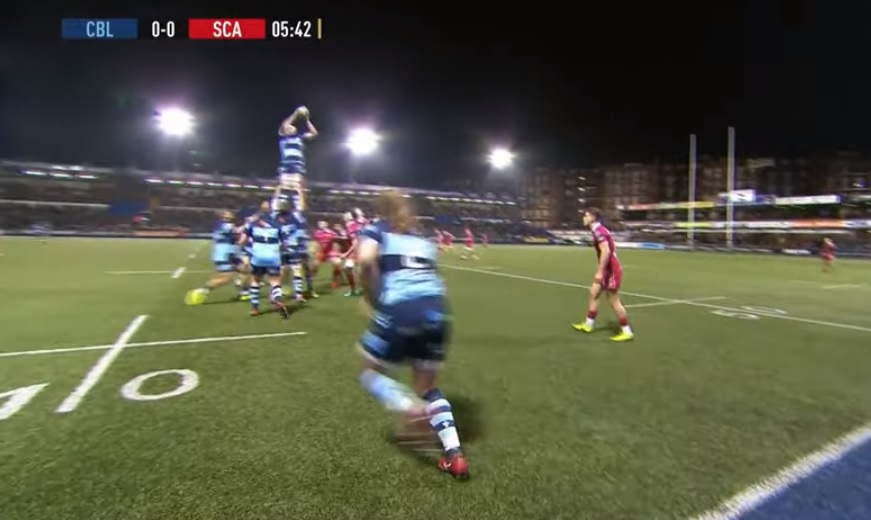 A gameplan like Munster's means you have to dominate and out-fight opposition. They only not only out-fought Cardiff but they out-thought them as well.

The end result was a bonus-point win.

SEE ALSO: 'I've Been Lucky To Work With Him' - Heenan Hails Lam And Muldoon Influence At Bristol

Rugby
4 years ago
By Conor Neville
WATCH: "That Is One Of The Most Ridiculous Decisions You'll Ever See"
Previous Next

Rugby
5 months ago
By Eoin Harrington
2021 U20 Six Nations To Kick Off In Cardiff In June
Rugby
2 years ago
By Maurice Brosnan
Magnificent Field Length Try Compliments Outstanding Connacht Victory
Rugby
4 years ago
By Conor Neville
WATCH: "That Is One Of The Most Ridiculous Decisions You'll Ever See"
Popular on Balls
Football
9 hours ago
By Eoin Harrington
John O'Shea Explains How He Ended Up In Goal For Manchester United In 2007
GAA
16 hours ago
By PJ Browne
Three Live Club Football And Hurling Games On TV This Weekend
GAA
11 hours ago
By PJ Browne
Incredible Penalty Halts Premature Celebrations In Galway
GAA
12 hours ago
By Maurice Brosnan
'Bad Coaching. I Think That Is A Big Problem In The GAA'