Connacht’s hopes of reaching the knockout stages of the Champions Cup for the first time were dealt a heavy blow after a heartbreaking last minute defeat to Leicester at the Sportsground today.

Leicester - who currently sit atop the Premiership - began the game superbly, taking a 10-0 lead and scoring two tries in the process through Joe Heyes and their powerful Fijian winger Kini Murimurivalu.

Connacht responded brilliantly and roared back with two tries of their own through Tiernan O'Halloran and Cian Prendrgast. 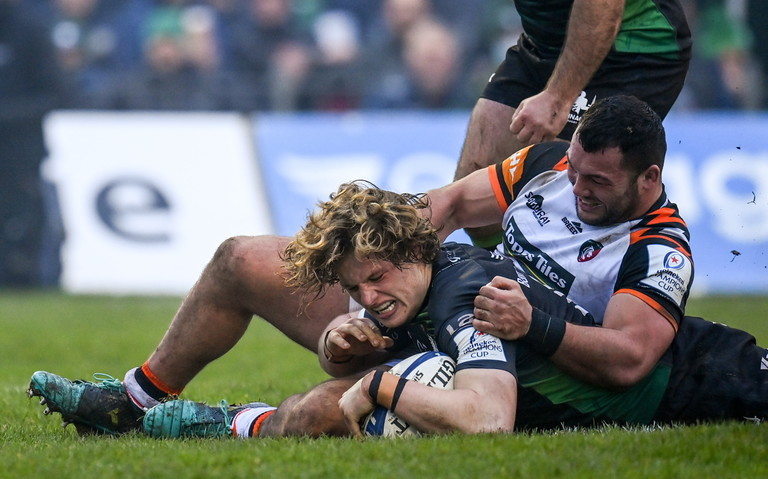 15 January 2022; Cian Prendergast of Connacht scores his side's second try despite the tackle of Ellis Genge of Leicester Tigers during the Heineken Champions Cup Pool B match between Connacht and Leicester Tigers at The Sportsground in Galway. Photo by Harry Murphy/Sportsfile

The home side went into halftime with a 14-10 lead, and momentum which carried over to the second half, with Connacht scoring tries in the 43rd and 48th minutes, giving them a 28-10 lead.

However, it soon became apparent that they would have a stern test on their hands to hold onto he lead, as they opted to kick possession back to Leicester and hold the lead rather than remain on the offensive.

Leicester’s bench was also the stronger of the two sides, with ex-Ireland U20s player Dan Kelly making a significant impact. Finlay Bealham’s departure was a massive blow to Connacht as well and sent their already creaking scrum into further disarray.

Leicester began their comeback with a score through Murimurivalu in the 55th minute before adding another through Charlie Clare in the 71st minute. Freddie Burns - brother of Ulster’s Billy - added the extras and set up a tense finale.

The tense finish was ultimately won by the away side as they snatched the win with a brilliant corner finish from Hosea Saumaki who managed to keep his feet out of touch by the slimmest of margins.

How many times this season have we seen them win a match in the final moments? 🐯#HeinekenChampionsCup pic.twitter.com/fcqkLkbi9T

It appeared from one camera angle that Saumaki's foot had touched the end line but upon further inspection a try was rightly given.

However, moments before the try, Paul Boyle of Connacht could have won a penalty.

This was a knock on by Boyle in last ruck for last try according to #Reynal.

Connacht fans and players were irate with ref Mathieu Raynal after the try was awarded. Bundee Aki was especially incensed but took to social media after the game to issue an apology.

Like to apologise about my action towards the referee and officials, kids who were watching. Absolutely not needed in this game. Emotions were high and that is certainly not an excuse for my actions. Definitely will take the loss on the chin and will be looking at myself.

It was one of those games that will have Connacht fans in a slump for weeks to come, but on the bright side they did mange to come away with two bonus points, and keep their hopes of reaching the last-16 well and truly alive. 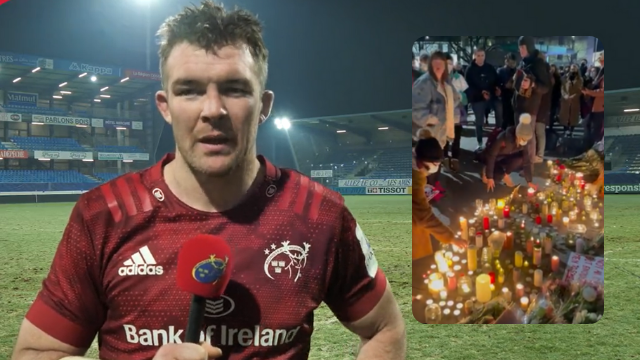 Rugby
6 days ago
By Gary Connaughton
Ronan O'Gara As Worried About Top 14 Clash As He Is About Champions Cup Final
Rugby
1 week ago
By Colman Stanley
'If Their 2nd Team Was In The URC They’d Be Top 6': Pundits Heap Praise On Leinster
Rugby
1 week ago
By Colman Stanley
Leinster Players Dominate European Player Of The Year Shortlist
Popular on Balls
Motorsport
2 days ago
By Eoin Harrington
F1: New Team Radio Clips Show Sergio Perez Frustration With Team Orders In Barcelona
Football
1 day ago
By PJ Browne
Five Things Learned From Stephen Kenny's Nations League Press Conference
35