Italy were scorned for being beaten out the gate in rounds one and two of the Six Nations, with the thrust of much of the comment centering on whether they should even be in the competition in the first place.

Yesterday, Italy were scorned for being competitive and not being beaten out the Twickenham gate, with much of the thrust of much of the comment centering on whether World Rugby should intervene to change the rules to make it more difficult for Italy to compete.

The Azzurri rocked up to England with a game plan that frustrated the hell out of the hosts for the first half: their refusal to compete on the ground meant no ruck was formed, resulting in there being no offside line. This exposed the English players badly, as they did not have the intellectual wherewithal to go forward rather than pass sideways. So befuddled were they, Dylan Hartley ended up asking Roman Poite to explain what a ruck actually is.

Eddie Jones took enormous exception to Conor O'Shea's tactics, saying that punters should ask for a refund because "that was not rugby". Equally arrogant in the face of the Italians having the audacity to compete legally was Matt Dawson, who decided to use twitter to have a meltdown. 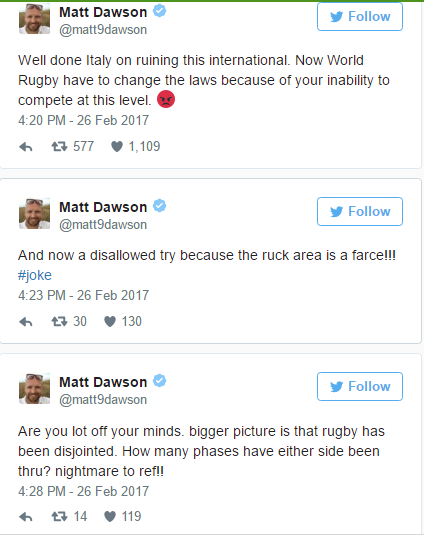 BBC Radio 5 Live put these comments to Conor O'Shea after the game, and his response was superb and dignified.

I'd like him to sit down at World Rugby and have a look at some of the other games we have played this year, and if he is that good on the rules, then have him make a comment after we were impacted, as we were, in the first game of this Championship.

But that's not for me to get into now. We came here to have a go. If anyone thought that the team who kicked for goal rather than kicking into the corner, and had a crack from deep off scrums was not here to play?

If they want us to lose by 100 points...well, why should we? Why should we be normal? We should be ourselves. Rather than having a go, he should have humility and respect for guys who have very little in comparison to their counterparts on the other side of the pitch.

I was expecting this to be honest. I thought it was a great game, a compelling game. People came here expecting sixty or seventy points. You had players making decisions on the pitch and how to deal with it, and that's what rugby is all about. Rugby is a game of chaos.

O'Shea added that it was typical that, when Italy beat South Africa, it is seen as a result of a poor South African team, and added what he perceives is another hypocrisy too, when it comes to other teams deploying this strategy:

Watch the full interview below.

"You put in a performance you're proud of and everyone is just picking at it"@chjones9 speaks to Conor O'Shea after #ENGvITA#SixNations pic.twitter.com/zgfsfP97MJ