Ireland put in an encouraging attacking display in Rome this afternoon, but the most exciting aspect of the game for many supporters was the debut of Craig Casey.

The Munster man is a huge prospect and seen as the likely heir to Conor Murray as the long-term solution at the scrum-half position.

While it was only a short cameo against Italy, it was still easy to see why Casey is rated so highly. He was electric in his play, both in carrying the ball himself and the manner in which he moved it on to team mates.

This cap will certainly be the first of many for both him and fellow debutant Ryan Baird.

Speaking after the game, Ireland captain Johnny Sexton said he was hugely impressed with both men. In fact, he even went as far as to compare Casey to England legend Jonny Wilkinson in the way he conducts himself.

We have come in for some flack over the last few weeks but internally as a group I don't think we have ever been more confident about where we are going and what we can produce.

I mean that properly. With the coaches that we have and the leadership group coming out of their shells, this group is on the right trajectory. I properly believe that.

Those two guys are going to play a huge part in that. Just their character.

Craig Casey, I didn't know him that well obviously - I had never played with him - but his attitude is...I don't think I have ever come across anyone, it kind of reminds me what I read about Jonny Wilkinson.

Knowing Johnny Sexton, this would not be a comparison he would make lightly.

As for Casey himself, he was certainly flattered by Sexton's comments.

He said this to me a few weeks ago. I think it's to do with obsessiveness with rugby. I'll take that compliment, yeah. Being compared to Jonny Wilkinson, I'll definitely take that...

I put it down as a goal when we went into the first lockdown: to come into the next season as an international.

I came close a few weeks ago against France, but today's all the sweeter for it.

I don't think there was a moment... maybe today after the 60th minute when we scored a try and I thought 'yes, I'm going to make my international debut'.

A young man with a big future. 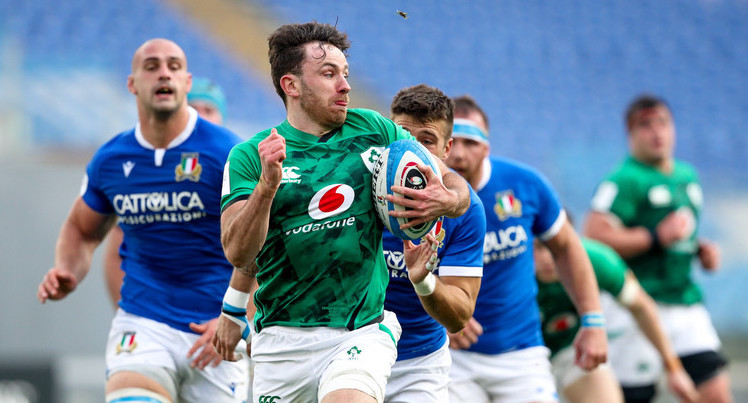