Mr. Schmidt, We Need To Talk About Darren Sweetnam

In August 2012, Darren Sweetnam made his bow on the national stage. In front of almost 42,000 fans at Croke Park, aged 19, the Dunmanway man was thrust onto the field in place of Conor Lehane for the second half of an All-Ireland semi-final. He scored after nine minutes.

At the time of Cork's defeat to Galway - which would transpire to be the former Doheny's clubman's final appearance for his county - Sweetnam had already represented Ireland in both badminton and hockey at underage level, but in fifth year discovered that he excelled, too, with oval ball in hand, and began lining out at fly-half for his school.

Four years after graduating from Bandon Grammar, and less than three years after he definitively ditched the hurley and sliotar, he made his debut for Munster at the newly-opened Irish Independent Park while on a development contract. A full deal soon followed.

And so, with a grand total of six years' competitive rugby experience under his belt, Sweetnam became a fully-fledged professional player for his home province.

Sweetnam exploded onto the national scene with two tries for Ireland '20s in their 46-3 win over Fiji at the 2013 Junior World Championships.

The fact that he's a man of many talents in a wider sporting sense frequently manifests itself within the narrower confines of the rugby pitch.

It was rarely more evident than during Munster's late victory against title-chasing Ospreys last night, and a quietly sublime performance which led to none other than Brian O'Driscoll predicting Sweetnam be included in future Ireland squads.

Big fan of Darren Sweetnam. Think he'll be capped by the end of the year.

The Irish rugby great was far from alone in this assertion. There's a growing sense that the 23-year-old is the consummate Schmidt-style winger.

Relative to his experience or lack thereof, the former Ireland under-20 brings to the table remarkable rugby fundamentals. Add to this his unadulterated 'x-factor' and you're presented with a player who - should he continue to develop at his current trajectory - can bring supplementary qualities to an Irish backline, as opposed to simply fitting the bill within the current system.

Of course, this perceived x-factor is far from intangible. The long and short of it is that Sweetnam's pace and extraordinary handling ability combine to birth a different breed of winger. The key difference with the Cork man is that he's intelligent enough to know how to amalgamate the two. And he does it, for the most part, while carrying the ball in two hands - presumably much to the exhilaration of underage rugby coaches up and down the country.

Take, for example, his break and offload to set up Jaco Taute in Munster's demolition of Leicester in the Champions Cup back in December. See also: The similar if otherwise inconsequential incident from last night's game, as converted to GIF form by Munster analyst Three Red Kings. Show both to your children.

Big error from Fonotia. He's focused on Conway and forgets Sweetnam, who cuts him up on the inside. Super line and offload from Sweets pic.twitter.com/jfStqkUR3i

Sweetnam is the coach's dream. His four-step guide to making magic happen in Munster's backline is as follows: 1) Carry ball in two (f*****g) hands, detect a gap. 2) Tuck ball under one arm and go. 3) Look up while in space, return second hand to ball. 4) Use both hands to release ball to teammate.

While backgrounds in both hurling and playing 10 at school level certainly contribute to his hand-eye coordination (did somebody say 'wristy rugby'?), his effectiveness in the offload is largely a product of basic coaching, and more pertinently, paying attention to said coaching.

Sweetnam crucially tucks the ball under one arm only when he's in space and it cannot be dislodged. By the time he's caught by a defender, the ball is back in two hands, and he has usually zoned in on a target recipient. It's fundamental but explosive rugby, and all the more valuable in a backline which, despite Munster's overall efficiency this season, has occasionally struggled to produce game-breaking plays.

Outrageous hands from Sweetnam and Bleyendaal led to a late, late win in Swansea, as Munster march on. https://t.co/7HmgpgfE9p

While you could say similar for Ireland, whose stagnant wide play in Murrayfield harked back to last year's kneejerk anti-Schmidt arguments, Munster differ in that they constantly invite their wingers infield. Ronan O'Mahony runs clever lines off fly-half Tyler Bleyendaal, where Sweetnam frequently acts as first receiver or as an auxiliary playmaker.

It's in these central areas where the can be at his most devastating, his fast feet and faster hands picking previously impenetrable locks after his more abrasive back-row forwards and centres have huffed and puffed to considerable effect.

Last night, where Tyler Bleyendaal was correctly lauded by the Sky Sports panel for setting Andrew Conway free down the left in the lead-up to Munster's winning score, a moment of ingenuity from Sweetnam milliseconds prior went almost unnoticed. With Munster struggling to make inroads, Sweetnam received the ball from scrum-half Duncan Williams facing a three-on-three on the left flank.

Having earlier stepped off his left foot and burst through the Ospreys' defensive line, he feinted to do the same - this time drawing the first two defenders before releasing to his Kiwi fly-half. Bleyendaal, then presented with a split-second two-on-one, provided the rest with a gorgeous pass wide to Conway. Moments later he found himself kicking the winning conversion.

You can watch the score and the beauty of the Sweetnam-Bleyendaal axis in real time here, and we've broken it down frame-by-frame below: 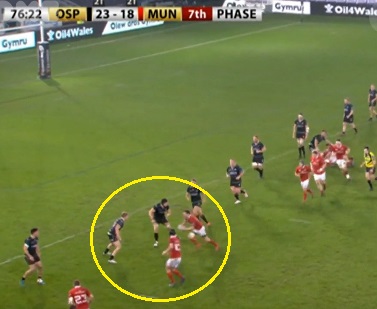 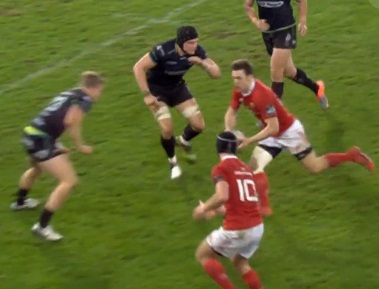 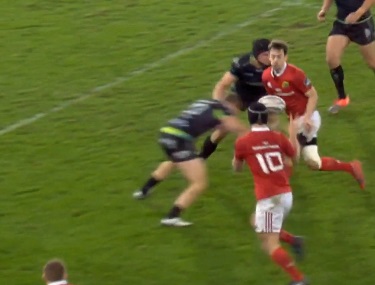 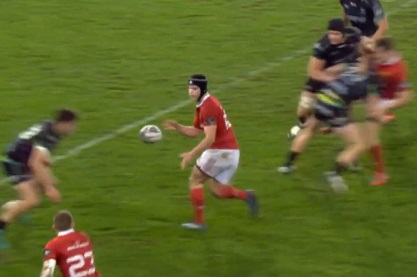 Prolific, too, under the high ball, Sweetnam's offensive skill set speaks for itself, and seems tailor-made for Joe Schmidt's Ireland attack.

At Munster, Jacques Nienaber’s defensive system emphasises line integrity, and what he describes as 'next guy line-speed'. The inherent risk is that it can expose a defence's wide men, as front-up tacklers leave the line and attempt to swallow ball and man. It's not fool-proof, but it's been hugely successful for the PRO12's meanest defence (Munster have conceded on average just 1.4 tries per game this season).

Nienaber's is not dissimilar to Andy Farrell's system with Ireland. Indeed, the South African maintains that all defensive systems in rugby are roughly the same, and that coaches merely emphasise different aspects within the same system.

But where Ireland were found wanting out wide during the first 25 minutes at Murrayfield, Sweetnam has excelled, with last-ditch, try-saving tackles versus Cardiff, the Scarlets and Zebre earlier this season sticking in the memory, as does the following effort at home to Glasgow on that fateful day in October, courtesy of Three Red Kings.

Unreal defence from Sweetnam here. Pace, dog, movement. A super day out for him pic.twitter.com/hTWwsn785E

Both Nienaber and Farrell's respective approaches to defence leave their sides relatively vulnerable to skip passes or kicks out wide, but Sweetnam has thus far excelled defensively on Munster's right wing. As prolific as he is creating space with ball in hand, he's equally effective closing space down without it.

None of this is to suggest the young west Cork man is the complete package. On the attacking front, he has converted fewer chances than he has provided for others this season, with a relatively modest four tries - including an albeit phenomenal score against the Maoris - in 17 first-team appearances, and a couple of chances spurned along the way.

What he is, however, is a highly intelligent rugby talent and rapid learner. Sweetnam might well remain on the international periphery this spring, but the unfamiliar territory of Japan in June could see something a little different blossom in Joe Schmidt's Ireland backline.

Rugby
3 months ago
By PJ Browne
Seven Years After Leaving Munster, Danny Barnes Is Happier Than Ever
3