Major beef has suddenly exploded between Paul Kimmage and Dave Kilcoyne on the subject of CJ Stander.

Paul Kimmage doesn't agree with Munster's South-African born flanker CJ Stander play for Ireland, and he has never been afraid of voicing these opinions. Stander, who was born in South Africa, has hugely endeared himself to most Irish fans with the way he has learnt off the national anthem and the fact that he gives absolutely everything when wearing the green jersey. Ditto with Munster, for whom Stander has been an absolute colossus.

While he acknowledges his excellence, Kimmage thinks Stander's inclusion in the Irish side is harmful for up-and-coming talent, and said as much on the Last Word last month:

I think he is everything you have said, I totally agree with the way he has fronted up for Munster, and his declaration, buying into the whole Ireland thing.

He is still depriving someone who was born and raised here of playing in that position. And I think that should be the bottom line.

While Kimmage criticised Stander's inclusion in the Ireland team then, he has perhaps stepped across the line with his latest comments, this time on Twitter. Responding to a user tweeting at him a graphic showing Stander's quality, he wasn't complimentary in his response.

And neither was big Munster prop Dave Kilcoyne in his own response to Kimmage. The tweet has since been deleted.

I used to think the Lance Armstrong fans were idiots...they're nothing compared to these one-eyed Munster tools. https://t.co/QwXBZpe9tl 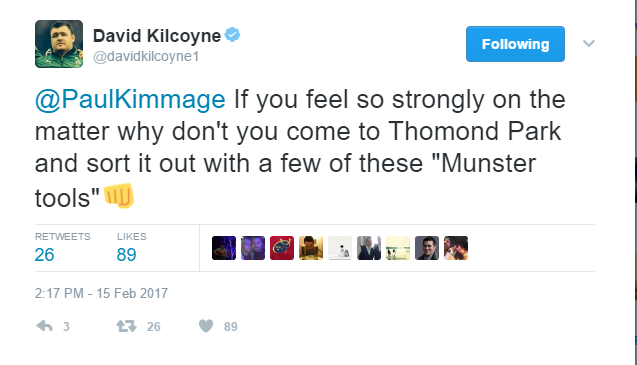 See Also: A Tribute To The Gordon D'Arcy/Brian O'Driscoll Bromance