'I Am Fortunate In A Way That Two Years In, I Am Still Here'

He strides in at over 6’5 in height, meticulously dressed in a green, blue and black pinstripe suit, topped off with black, leather derby shoes and a black Casio. But most importantly of all, Doddie Weir wears a broad smile, 32-teeth wide, as he sits down in Dublin to discuss the upcoming Ireland v England Legends game.

The suit, he explains, really was carefully chosen and crafted. It represents the sides closest to his heart. Black for his career club, Newcastle. Blue for his country, Scotland. Yellow for his boyhood team, Melrose. 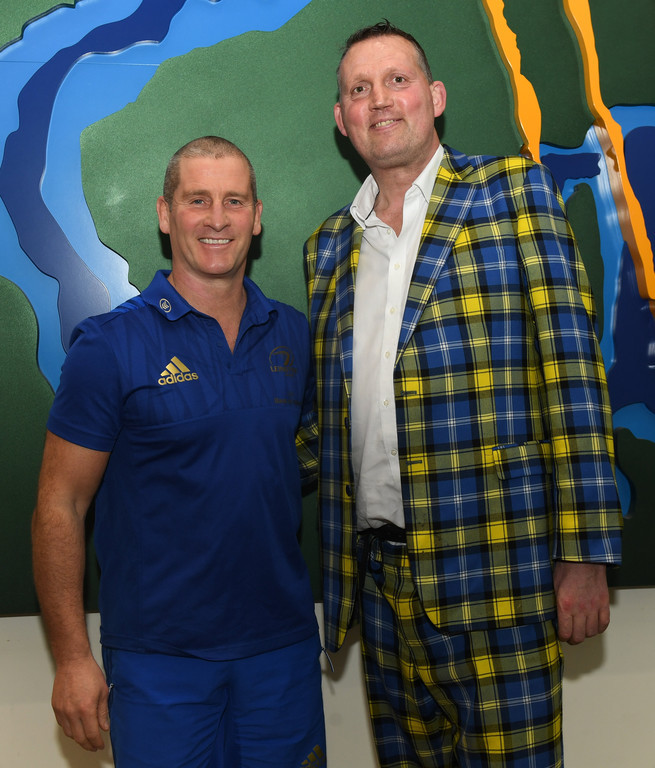 The former Scottish rugby player amassed 61 caps during his popular career. It included an incredible record against Ireland, undefeated until his very last outing when Ireland got one back. "The only teams I have a better record against in full internationals are Ivory Coast, Japan, Spain, Tonga, Samoa and Zimbabwe. So- thanks, lads," he wrote in his autobiography.

Weir has returned to Ireland because a portion of the funds from that upcoming legends match will go towards the My Name’5 Doddie Foundation, which raises funds for research into Motor Neurone Disease. This is a condition Weir has battled for the last two years and the reason he started the foundation.

"We are able to see that MND is quite a complex issue. It's not an easy fix but the annoying thing for myself, and why we went ahead, is that there is nothing new on the table in the last 25 years and that is outrageous. The people with MND, it is a terminal issue and the average life expectancy once diagnosed is about three years. I am fortunate in a way that, two years in, I am still here.

The research is there but we have got no money to bring the clinical trials out to the patient. So we need that to happen and the foundation is going to try and propel them into the market.

It's a bit like you've designed a car engine that can go 220 miles an hour but you can't test it to see if it actually makes it or not. That's how bad the situation is: there is no track or no race driver. MND is exactly the same in the drugs industry at the moment. They have got certain things that are ready to go but they don't have the funding to get it over the line so we have pledged another million pound towards research in the next year.

Ultimately, the goal is that myself and a lot of others can stick around and annoy you all with some more horrendous fashion.

Weir wants to raise awareness. Motor Neurone Disease is incurable and progressive. The cause is not known.

"It also gets to your swallowing so you can't swallow, you can't eat, you can't breathe, you can't speak, so the whole of your body shuts down and eventually all you can do is communicate with your eyes."

The average life expectancy for someone diagnosed with the condition is three years. It was November 2015 when Weir first noted problems with his left hand. He, unfortunately, googled his symptoms before diagnosis and knew what was coming. Despite that, he is in upbeat form. It's striking defiance in the face of unimaginable desolation.

Why am I quite positive? Well we get emails to the foundation and I got one a wee while ago saying that this gentleman from Yorkshire...it was from his brother in law, it said big man, keep up the good work up because this fella was diagnosed in September 2017 and died in December 2017, he was 38 years of age and had two kids, two and five.

Weir also cites another iconic rugby figure, Joost Heystek van der Westhuizen. The former Springbok who passed away last year at the age of 45 from the same condition. He takes inspiration from the South African's outlook and that is why he tries to replicate it himself. His positive attitude is one thing the disease will not diminish.

"That's where my positive thinking comes in because talking to Joost van der Westhuizen's team, who you may or may not know passed away unfortunately from Motor Neurone Disease, he spent a lot money trying to find a cure for himself but it didn't work, but his team said the best drug that he had was positive thinking.

"And that's where, I think, I'm coming from but it comes about from the support, which is phenomenal. It's helping me, it's helping awareness, it's helping with the most amazing game on the first of February as well and it's all working as a team to try to find this ultimate cure, and that's what life's about."

Doddie Weir was speaking to media in Dublin today ahead of the Ireland v England Rugby Legends match taking place in the RDS on Friday, 1st February. All proceeds from this great event will be split among the My Name’5 Doddie Foundation, Rugby Players Ireland Foundation, Restart Rugby, the IRFU Charitable Trust and Irish motor neurone charities.

SEE ALSO: Australian Media Have Massive Expectations For Ireland In 2019

Rugby
3 years ago
By Vincent Whelan
Doddie Weir Speaks Emotionally About His Battle With Motor Neurone Disease
Popular on Balls
GAA
23 hours ago
By PJ Browne
'Sport Gave Me An Outlet. It Gave Me Something To Channel That Anger'
Football
8 hours ago
By Donny Mahoney
Report: Shamrock Rovers Wunderkind Kevin Zefi Very Close To Move To Inter Milan