Prior to being defeated by Ireland at the tail-end of the 2017 Six Nations, Eddie Jones' start to life in charge of the England rugby team had been an unmitigated success. Replacing the beleaguered Stuart Lancaster a year earlier, the plucky Australian had overseen a winning record of 17-0.

Joe Schmidt's side halted England's attempt at back-to-back Grand Slam wins that evening in the Aviva stadium, and, it is perhaps not too sensational a claim to suggest that things have scarcely seemed as good for Eddie Jones' men ever since.

Of the 13 games played since, Jones oversees a less enviable record of 8-5. As another World Cup looms, a new book charting some of Eddie Jones' professional idiosyncrasies outlines why little of this should necessarily come as a surprise.

Writing in The Telegraph, the book's author Mike Colman sought out a number of those who had worked closest with Jones (although nobody seems to last too long). Having left the Brumbies to manage the Australian national team in 2001, Jones was notorious for his long working hours. Regardless of the circumstances, his expectations were all-encompassing.

"Stories of the demands Eddie places on his assistants are legion," Colman asserts.

"One of the most oft-repeated is of the time the Wallabies had come to the end of a long and arduous season with a win in their final Test.

"The assistant coaches were winding down with some well-deserved drinks when, around 2am, their mobile phones started beeping.

"It was a message from Eddie. He had been reviewing tapes of the season and was ready to begin the next year’s campaign. All coaches were expected at a 6am planning meeting." 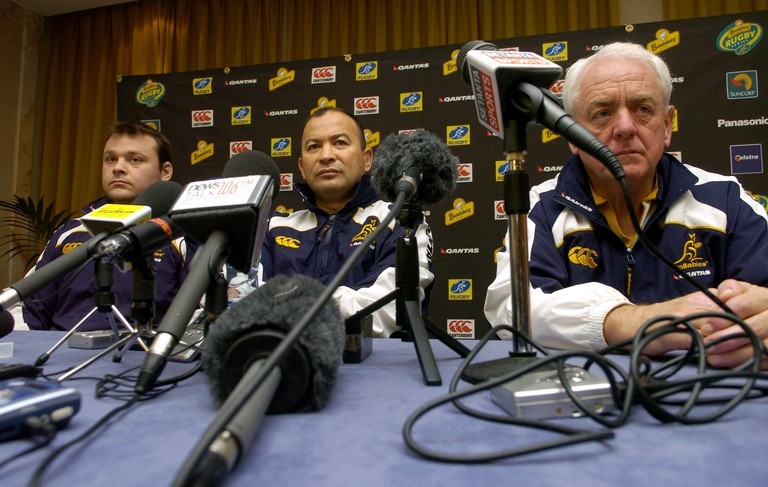 Former Australia international Roger Gould had an equally hard time of it with Jones; detailing the implausibly high standards the head coach would set for his staff.

"Working as an assistant to Eddie, you were always having to defend your position. You would put everything on the table and have to convince him that you were right.

"When he put something on the table, you’d have to convince him he was wrong. Trouble was, that never happened.

"He has bad managerial skills. I couldn’t believe the way he talked to people in front of other people. You can’t take away their dignity."

Curiously apt for the current situation Eddie Jones finds himself in with England, former Wallaby Ross Reynolds highlighted what he believes are the head coach's limitations when it comes to dealing with pressure.

"He was good to have a beer with but when the pressure grew he was not in a good place. He lost the dressing room. He went against the players. When things started to go awry and Eddie lost his cool, the inner sanctum didn’t enjoy it.

"At one stage they had been winning 80 per cent of their games and then all of a sudden they weren’t winning. People started turning on each other. It was a combination of a lot of things, but it became a pretty unpleasant environment.