In this brave new individualistic age, one '-ism' maintains a lingering influence over the sporting realm. The Eddieism.

The Autumn Nations Cup has seen the return of the former Ireland coach to our screen, and with it one of the most entertaining things in rugby punditry: Eddie O'Sullivan's one-liners.

In this era of rugby's manic and prosaic obsession with "the process", Eddie's weird one-liners can be seen as a sane reaction to an insane world. Perhaps that is reading too much into them, but they are, at least, exceptionally entertaining.

Here are a few of our favourite Eddieisms, and please get in touch with your nominations.

"You can't put the toothpaste back in the tube"

What it means: This is a pretty straightforward Eddieism. It is a comment on the finality of our actions, and the fact that many of our decisions are irreversible. These can range from preparing a Golden Generation for a Rugby World Cup in France to using too much toothpaste when brushing our teeth.

"You can't unring a bell"

What it means: See above.

What it means: This bon mot comes to us from Paul O'Connell's autobiography. Eddie was critiquing his forward's rucking style during a training session, and presumably lobbed this verbal grenade to satirise their poor ball presentation. We assume that, in this ridiculous metaphor, the wrapper is no longer on the Mars bar.

"Thanks for the use of the hall. Game over"

What it means: A rural Irish twist on a typical phrase that goes along the lines of "Game, Set, and Match".

"Take them to the woodshed"

What it means: A slightly sinister Eddieism, reminiscent of how a family from the American South would deal with an ill dog on their ranch. Eddie dropped this one as he bemoaned France's decision to kick a late penalty through the posts, rather than kick for the corner, hold possession, and kill their opponents softly and slowly in a Six Nations game against Scotland.

"As useful as a trapdoor in a canoe"

What it means: A comment on the implacability of a bad situation, and the utter lack of hope on offer.

"The full bag of chips"

What it means: This is Eddie taking the challenge of a team seriously, believing it to be more serious than that of someone like the Russians, who are presumably less than half a bag of chips.

"A different bag of hammers"

What it means: This Eddieism is a classic from his Ireland days. Having already played New Zealand, this is how Eddie described the upcoming challenge of Australia. Yeah, we have no idea either.

We've definitely missed a few, so do get in touch. 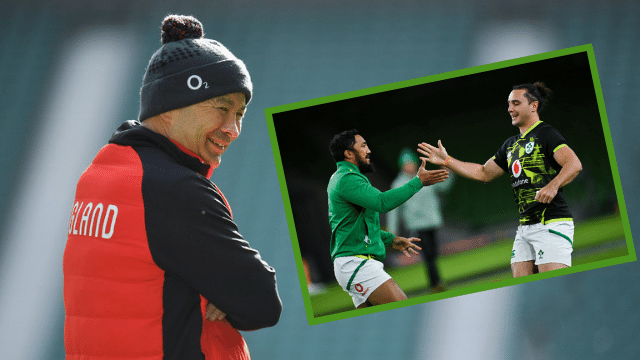