Back in 2011, the England rugby team became the laughing stock of the internet after a leaked 'GRAND SLAM CHAMPIONS' promo video did the rounds despite Ireland beating them on the final day of the competition thus preventing them from winning the grand slam.

But now, tempting fate has been taken to new levels as Groupon are offering a discounted England 'Grand Slam Champions 2017' jersey to customers just the three weeks before the tournament event starts.

While England are indeed the tournament favourites having won their last 14 games, and the t-shirt isn't official England Rugby merchandise, it still seems utterly ridiculous to produce, let alone sell, a t-shirt like this well in advance of a competition commencing.

Also, England are the only nation for which this t-shirt is available. If they released a Scotland 'Grand Slam Champions 2017' then it wouldn't look as bad, in fact, that would actually sell far more as a gag gift, but England fans have already started buying the jersey crowning them undefeated winners of a tournament that starts next month.

Here it is in all it's obnoxious glory: 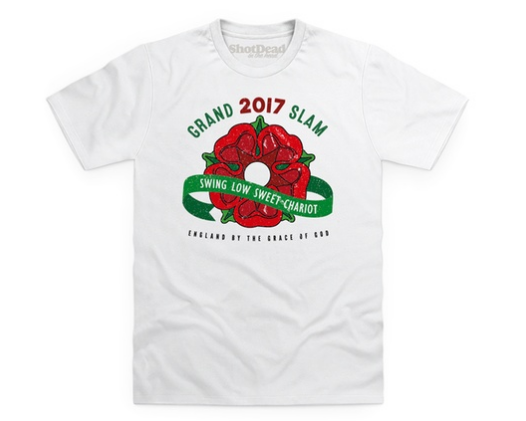 The idea that a fan should wait for something to actually be achieved before buying merchandise to signify an achievement seemingly is a thing of the past.

At the risk of sounding a tad biased, hopefully this is tempting fate and we can have a good laugh in March, otherwise, at that price it could prove to be a cracking deal for a supremely cocky England fan. The site does claim that 'Over 10' have been bought already...