An errant tweet by Nathan Hughes looks set to cost the England rugby player a great deal of frustration, and possibly a place in Eddie Jones' plans for the upcoming Autumn internationals.

Attending his own disciplinary hearing last night, Hughes had been cited for punching Lewis Ludlow during the Wasps vs Gloucester game on Saturday.

Due to commence at 6:30pm, a half-hour delay must have left the No. 8 disgruntled. Shortly after 8:30pm, with the hearing still taking place, Hughes decided to publicise these feelings. 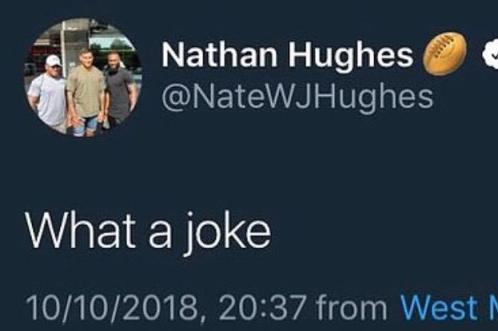 Opting to delete the tweet shortly thereafter, this wasn't enough to convince the powers that be to take decisive action.

Suspending the hearing, a subsequent statement from the RFU indicated the need "to deal with an issue that arose during the evening."

The England rugby player Hughes is now looking at a second charge to go along with the punching of Ludlow.

Already facing into an automatic ban of 6-8 weeks if found guilty of the initial charge, any potential leniency on behalf of the committee isn't likely to be forthcoming after Hughes' demonstrated his dissatisfaction with proceedings so publicly.

What this means for Nathan Hughes and his immediate playing career is somewhat troubling.

Considered second choice to Billy Vunipola in Eddie Jones' England plans, that the Saracens man has been the unfortunate victim of numerous injuries in recent years, it is certain that Jones would have preferred to have Hughes at his disposal for upcoming internationals against South Africa and New Zealand.

With Wasps due to kick-off their European Champions Cup tie against reigning champions Leinster tomorrow, The Times reported that Hughes had been hopeful he would be cleared of the initial charge in question to play the game - that won't be happening now.

Worse still, there is every chance Hughes could now miss Wasps' second European fixture against Bath in a week's time also.

Rugby
1 day ago
By PJ Browne
The Last Munster Team To Win Silverware: Where Are They Now?
Rugby
2 days ago
By Gary Connaughton
Ronan O'Gara As Worried About Top 14 Clash As He Is About Champions Cup Final
Rugby
2 days ago
By Luke Delaney
How To Watch Leinster v Munster In URC Showdown
Previous Next