Ireland ended their Six Nations campaign on a high with victory over England in Dublin on Saturday. Just as the game has given reason for optimism about the Irish team, it has resulted in pessimism about their side in the English media.

For The Observer, Paul Rees writes that Saturday's game was Ireland's best performance of recent times.

"Ireland, marshalled by their half-backs Murray and Johnny Sexton, delivered their most impressive performance since 2018. They were, as usual, unrelentingly physical, but their two tries, which both involved the No 8 Jack Conan, who was making his first start since before the last World Cup, showed how they have tweaked their attack under Mike Catt."

"Our strapline against Ireland was always 'win the air, win the floor'. It was all about wining the aerial battle and the breakdown.

"On Saturday, England won neither of those areas.

"Andy Farrell's selection was a masterstroke. He brought in his experienced guys who had been stuck on the sidelines and would have been really revved up.

"They all stepped up. Conor Murray showed that he is still a force, while Bundee Aki and Robbie Henshaw were huge together in the midfield. Great also to see veteran Keith Earls have another brilliant game."

Also in the Mail on Sunday, former England head coach Clive Woodward selects his Lions XV. Tadhg Beirne is the only Irish player to make the team.

In his column, Woodward questioned why Conor Murray has been absent from the Ireland team of late.

"The Ireland half-backs completely bossed proceedings. I have no idea why Ireland have been leaving Murray out because to my eyes he is always a class act and that is only accentuated when he pairs up with Sexton.

"Warren Gatland will have enjoyed seeing the duo back in form. This was the best I've seen Ireland play in a long while and it's a huge moment for Andy Farrell. Ireland 'found' themselves on Saturday."

The Telegraph's Gavin Mairs writes that Ireland bridged a physical gap with England.

"Most significantly, Ireland finally rid themselves of any sense of a physicality inferiority complex against England. Each of England’s previous four successive victories against Ireland had been defined by their ability to bully their opponents in the forward collisions.

"Yet the roles were completely reversed here.

"It is no exaggeration to report that at times this contest was little more than a training exercise, such was the gap in intensity between the two sides."

"The Tadghs, Furlong and Beirne, were epic. So too the half-back bosses. England simply did not have the dominators available to Ireland. Sexton and Conor Murray at half back looked almost back to their best. Furlong on the tight-head was monstrous, so superior that he was almost disdainful. Beirne looked a Lion all over, though probably at blind side.
The whole team played with accuracy and energy, and if my own player of the match was unquestionably Robbie Henshaw in midfield, then you could have made a case for several. Henshaw looked like exactly the kind of midfield storm force for which England have been searching since 2003. He was everywhere, and everything."

Also in The Sunday Times, Stuart Barnes praises Johnny Sexton and Paul O'Connell while also calling for England head coach Eddie Jones to be shown to the door.

"Sexton quietly proved his doubters wrong. I will admit I thought his end was approaching, but his previous two performances have been immaculate. He has catapulted himself right into contention for the British & Irish Lions. He has been peerless, cool behind the white-hot furnace of a pack pulled back from the brink of being uncompetitive by Paul O’Connell, the forwards coach.

"The fly half is one of the great tens of the last decade. O’Connell is an Irish rugby immortal on the field. He appears destined for greatness as a coach. One coach rises, another should fall. It is Jones’s team. It is his fault. Time to go." 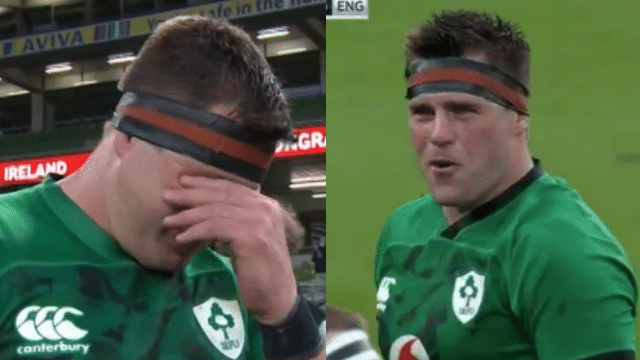 Rugby
1 day ago
By Colman Stanley
Roy Keane Made Quite An Impression On Eddie Jones And The England Rugby Team
Rugby
1 week ago
By Gary Connaughton
Williams & Quinlan Worried By Ireland's Fly-Half Options Ahead Of Six Nations
Rugby
1 week ago
By Colman Stanley
Heaslip And Quinlan Say Tadhg Beirne Has To Start For Ireland
Popular on Balls
Rugby
2 days ago
By Colman Stanley
Keith Earls Shares Story That Captures Andy Farrell's Decency
Football
1 day ago
By PJ Browne
'If He Continues With Performances And Goals Like That, Stephen Kenny Will See It'
Football
2 days ago
By Eoin Harrington
Quiz: Name Every Player To Score In A Champions League Final
Football
19 hours ago
By Gary Connaughton
Portsmouth Likely To Retain Gavin Bazunu This Month Despite Championship Interest