Ethan McIlroy's sensational offload for Hayden Hyde's try during Ireland U20s' 39-21 victory over England came as no surprise to his home province of Ulster. He already produced similar in his first senior pre-season game last summer.

The Methody College Schools’ star has gone from strength to strength since the 2019 cup win and made his senior Ulster debut at the RDS against Leinster earlier this year. That came thanks to a superb showing against Glasgow during their 2019/2020 preparations.

? A day to remember for Ethan McIlroy!

His skill and decision-making are precisely the qualities that have set the last two U20 teams apart.

"You have to be pleased with some of the tries we scored. The boys' ability to keep the ball alive and back each other up I think was a huge positive for us," said head coach Noel McNamara post-match.

Sean O'Brien makes a strong carry before freeing his hands to offload wide to McIlroy. 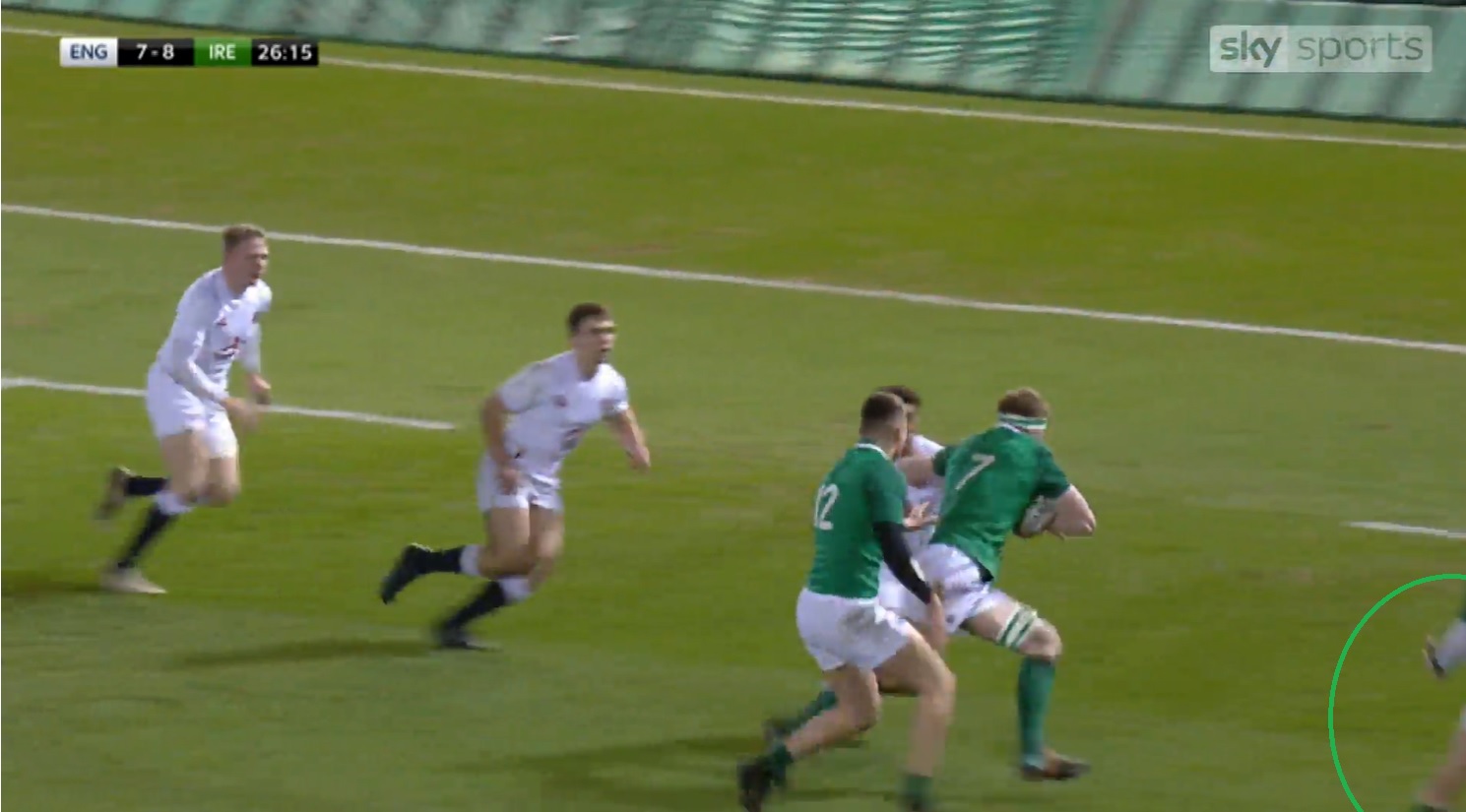 McIlroy does well to stay infield and fires a pass behind his back to centre Hyde. 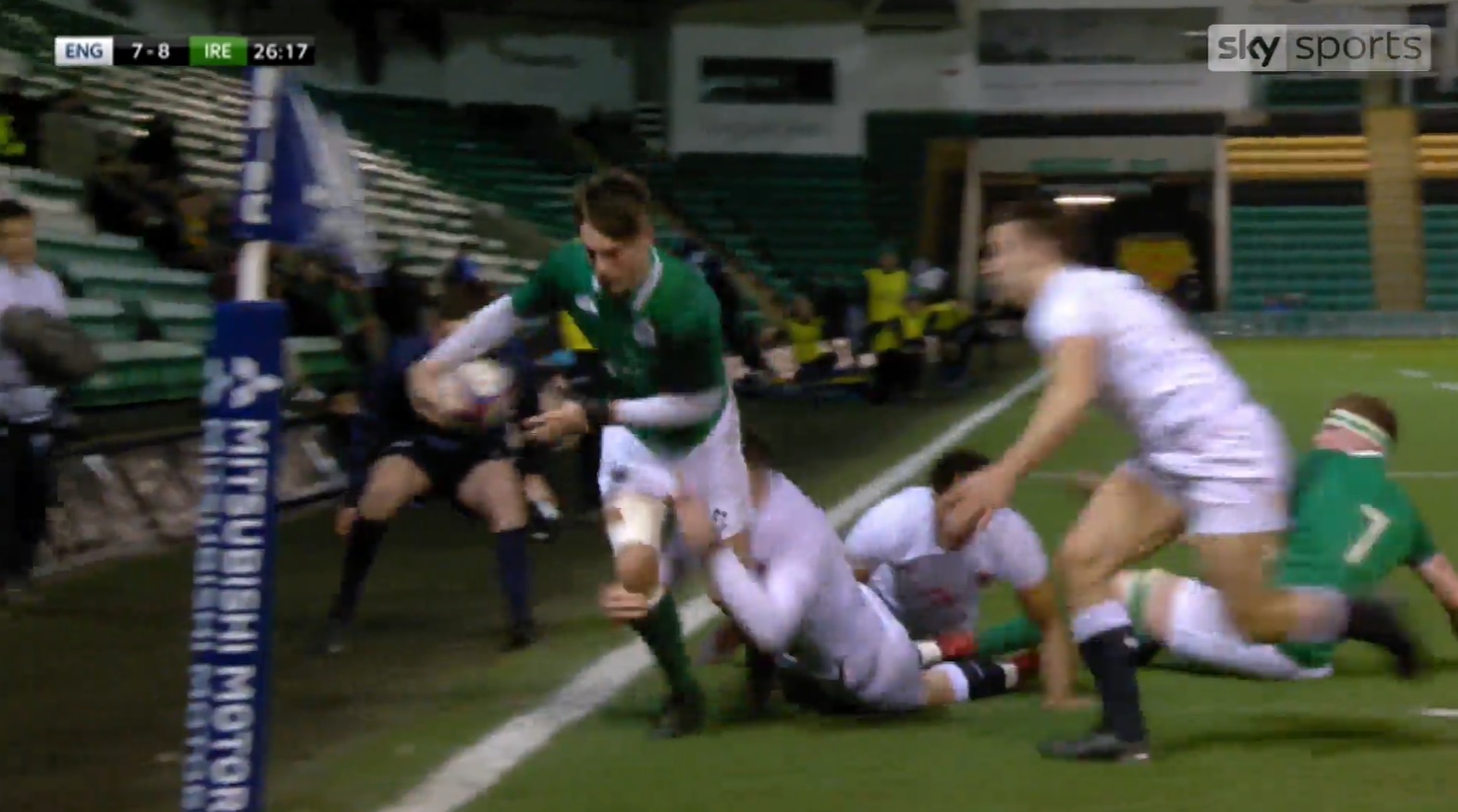 It results in an outstanding try. 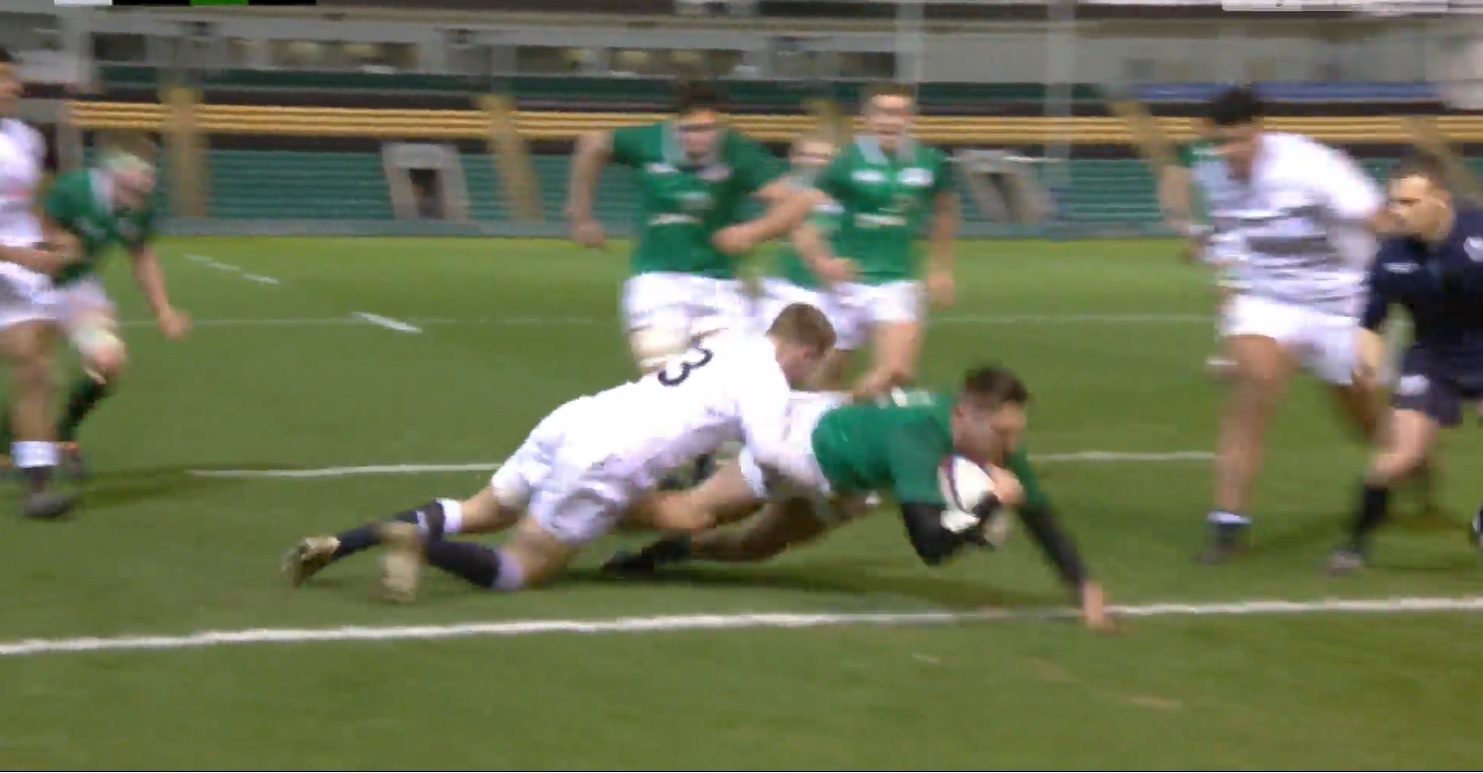 When asked by Sky Sports what he was most impressed with from Ireland, Northampton Saints starlet and former England U20's captain Harry Mallinder pointed to this moment.

The way that they back their skills. That was amazing seeing the offload in the corner. Some incredible skills on show.

Everything about the passage was strikingly precise. Scrumhalf Lewis Finlay identified an underresourced ruck so committed. Outhalf Jack Crowley spotted his half-back partner's act and responded by stepping in.

His pass to flanker Sean O'Brien was crisp. The Leinster man produced an audacious offload for his winger. McIlroy bettered it. All the while centre Hayden Hyde had run a strong support line and was in position to score.

Hyde returned the favour for Ireland's fourth try and while the finish was straightforward McIlroy ensured his timing was exact as the ball moved wide.

Developing as an underage try-scoring winger can often prove to be a double-edged sword. When gifted with pace and power, often technical aspects such as competing in the air or defence tend to be neglected leading to a catch-up period down the line.

Andrew Conway is a good example of that and has now become a supremely well-rounded winger.

During the 2019 World Cup, South African Cheslin Kolbe's attacking flair attracted widespread plaudits but there is much more to his game, as Rassie Erasmus said after the group stages: "I thought that everything from his attack to his defence to his aerial game was very good."

The modern winger is much more than a finisher.

What is particularly encouraging about McIlroy is the fact that his contribution to Ireland's 2020 U20 Six Nations campaign has not merely been in the form of scoring.

Against Scotland, it was his aerial prowess that caught the eye as he claimed numerous kicks expertly.

He is also versatile having played across the back three and kicked conversions during his outstanding Danske Bank Ulster Schools’ Cup campaign.

In defence, he was similarly effective.

England's opening try came after a clever line-out move. However, in the build-up to it, McIlroy made a great defensive contribution.

The English pack are set up to launch a maul with their prop ready to get on the ball. Note 6 foot 5, 124kg Exeter Chiefs back rower Rusiate Tuima lurking on the short side. 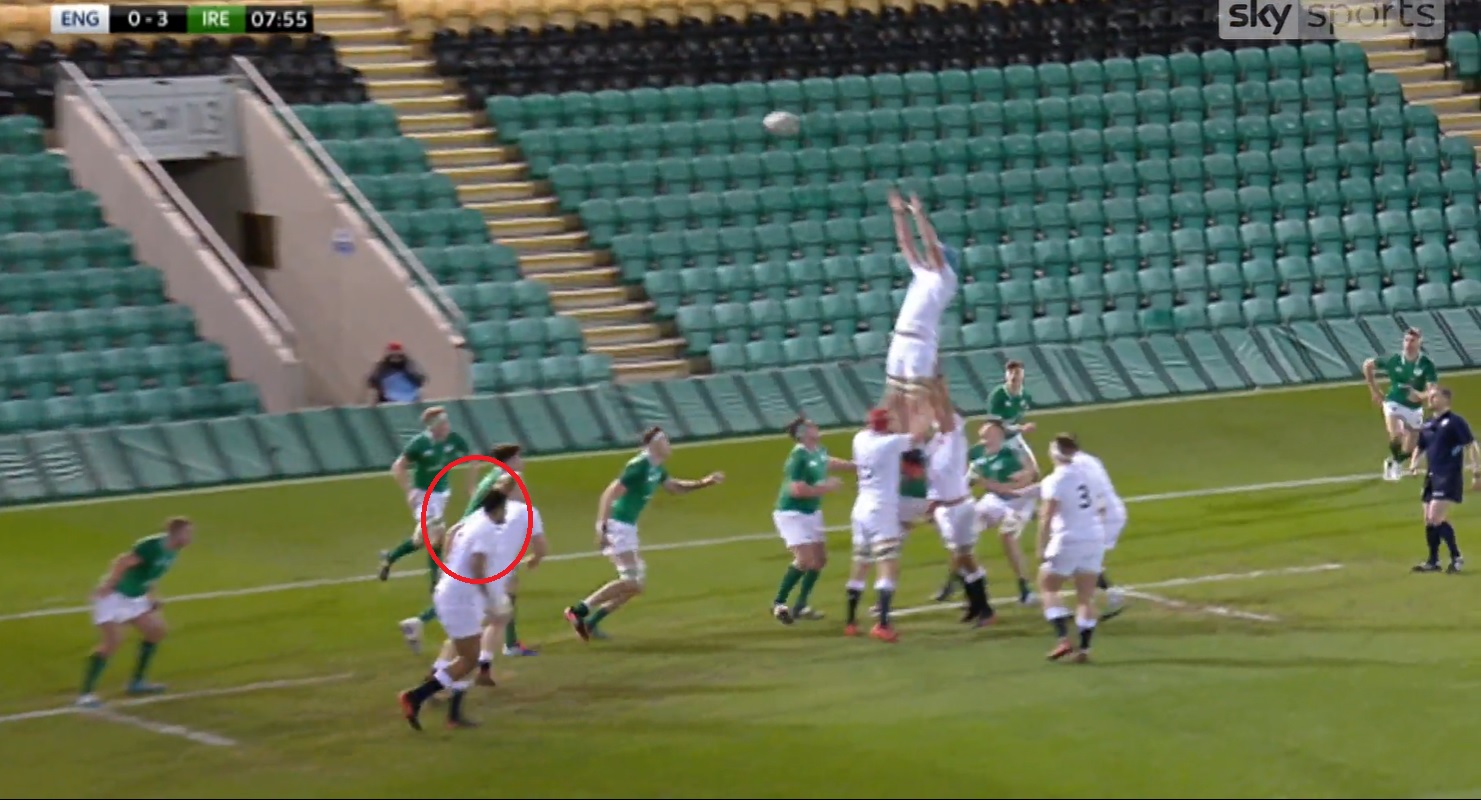 Ireland's pack are sucked into the maul but it is a dummy move and the ball is quickly shifted to Tuima charging around the corner. 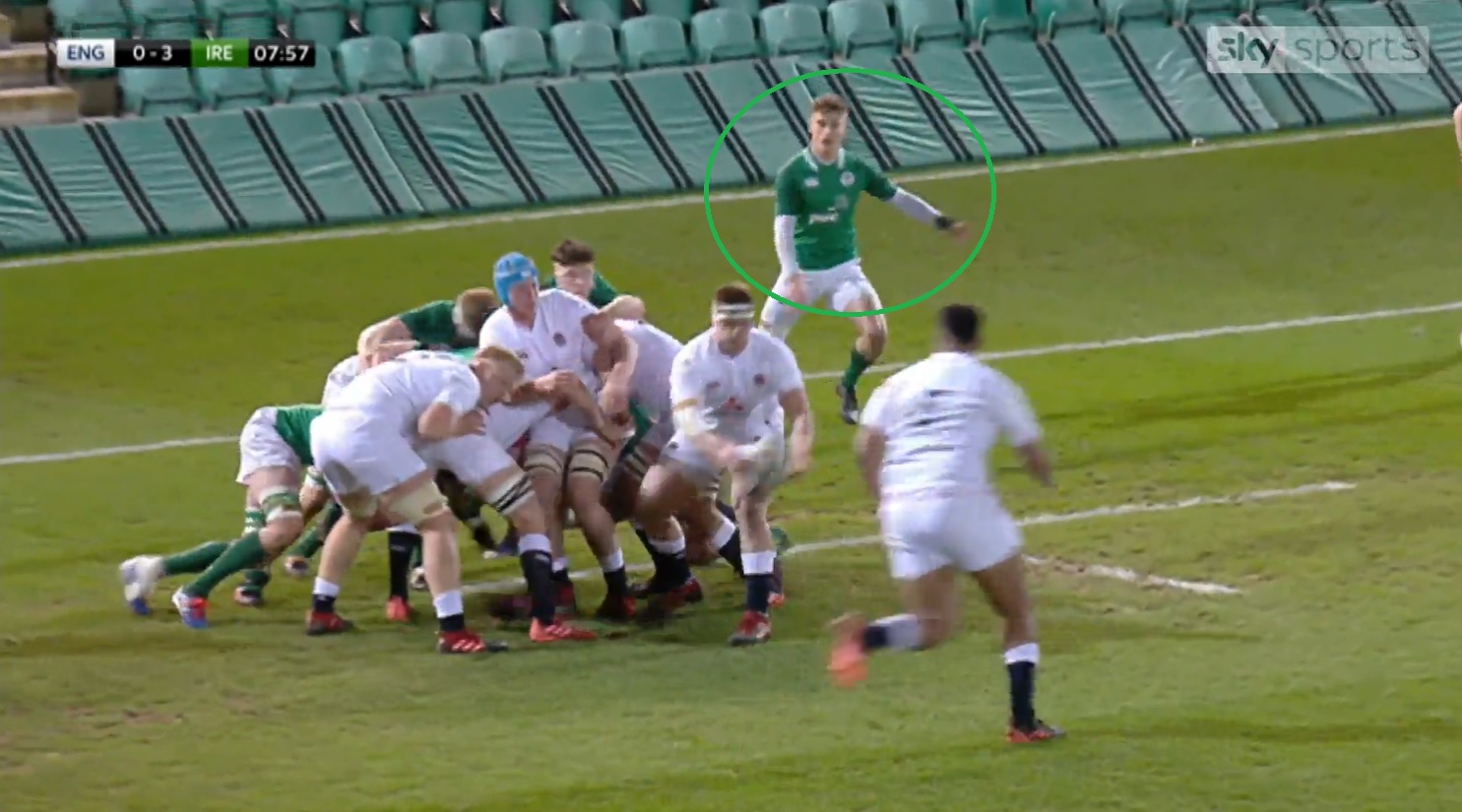 McIlroy races up and chops the big number 8 on the five-metre line. Unfortunately, the rest of the Irish defence do not react as quickly and England score shortly afterwards. 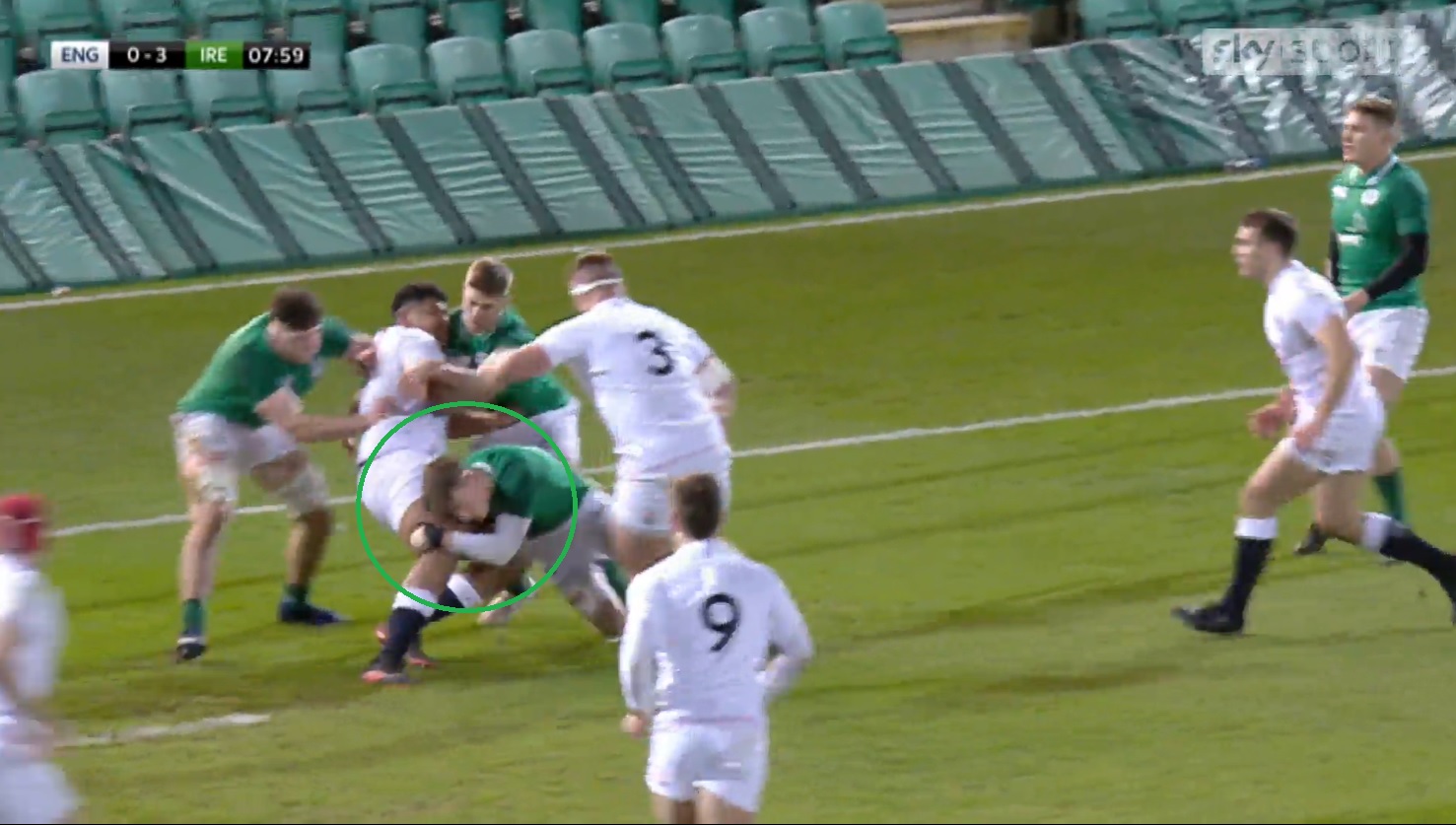 The result on Friday means Ireland are just two games away from securing back-to-back Grand Slams. Yet that is not the most important thing. It is worth bearing in mind that England were without several players due to Premiership action. Only McIlroy has played senior rugby from the current Irish squad.

What is most encouraging is the vast skill-set this side have shown so far. Prospects like McIlroy who are effective on both sides of the ball in numerous ways.

McNamara is a big fan of legendary basketball coach John Wooden. He often points to one quote in particular when quizzed on his aim with the U20s: ‘You can only judge the value of a season in 20 years’ time.’

The true extent of this team's success will not be known for quite a while, but there is no doubt their potential is endless.

SEE ALSO: As It Happened - England Vs Ireland In The U20 Six Nations

Rugby
11 hours ago
By Jonathan Byrne
Rory Best Wants To See Farrell Utilise 'Squad Of 25 Or 26' For Six Nations
Rugby
1 day ago
By Jonathan Browne
Italy Head Coach Kieran Crowley Would Welcome Promotion And Relegation In Six Nations
Rugby
1 day ago
By Colman Stanley
Roy Keane Made Quite An Impression On Eddie Jones And The England Rugby Team
Popular on Balls
Rugby
2 days ago
By Colman Stanley
Keith Earls Shares Story That Captures Andy Farrell's Decency
Football
2 days ago
By Eoin Harrington
Quiz: Name Every Player To Score In A Champions League Final
Football
1 day ago
By PJ Browne
'If He Continues With Performances And Goals Like That, Stephen Kenny Will See It'
Football
14 hours ago
By Gary Connaughton
Portsmouth Likely To Retain Gavin Bazunu This Month Despite Championship Interest