Fiji took a second successive Olympic gold medal in rugby sevens this morning, after defeating New Zealand in the gold medal match in the Tokyo Stadium.

It was a dominant performance by the Fijians, who won 27-12 over the number one ranked team in the world. New Zealand were behind from the first minute and never recovered, as Fiji stormed on to take a spectacular gold medal.

The win in Tokyo was only Fiji's second ever medal at the Olympics, following their gold in the same event at Rio 2016. The scenes both before and after the game were very emotional, with several of the Fijian players in tears during the anthems.

One of the biggest GOLD medal matches starts now on @7plus - Fiji v NZ for rugby 7s glory. Fiji players crying during anthem and I’m a mess pic.twitter.com/Z3nigdfmOm

When the final whistle went and Fiji's gold was confirmed, the celebrations began back on the Pacific Island. Many towns saw firework displays, and Twitter was rife with videos of the scenes in Fiji.

One particularly touching video showed an ambulance crew, who have been working tirelessly throughout the pandemic, watching the final seconds of the gold medal match. It's clear to see just how much this rare Olympic triumph means to the people of Fiji.

For a few minutes tonight and within their bubble, the @MOHFiji FEMAT prehospital coordination & ambulance crews were able to take their minds off COVID response with no emergency calls or tasking disturbing the moment

Celebrations after Fiji's gold medal win at the Olympics! pic.twitter.com/cGELrL1C3u

Former Fiji international Nemani Nadolo was struggling to contain his emotions, as his wife posted a video of the Leicester Tigers wing watching the closing stages of the final on his phone in a cafe.

We have to say, if Ireland took home such a dominant gold medal, we'd be following the lead of those in Fiji and ordering a bottle of wine and celebrating.

It wasn't to be for the Irish team in the rugby sevens, unfortunately. Their first ever appearance at the Olympics saw one win in the pool stages saw two wins over Kenya and South Korea, but their performance in the pool stage was only enough to reach the 9th place play-off, which they lost overnight to Kenya.

The addition of rugby sevens to the Olympics has proven a great success - not least for the people of Fiji, who will be celebrating their second ever Olympic medal long into the night. 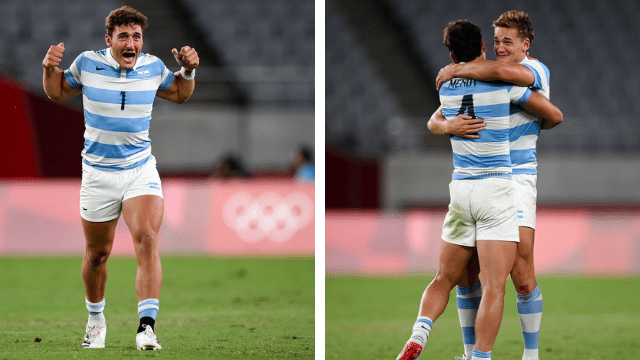