Having had plenty of success in his first two tours as Lions head coach, there is a sense that Warren Gatland got his tactics wrong in South Africa on this occasion.

Playing against a Springboks side who had not experienced competitive action in quite some time, he opted to attempt to beat them at their own power game instead of utilising the attacking talents in his squad.

The outcome was predictable. After a positive result in the first test, South Africa quickly got back into gear and came out as winner in the next two matches.

Gatland has come in for plenty of criticism as a result, with even some of those within the squad unsure of the way he approached the games.

Finn Russell is amongst that bunch. The Scot came in on the final test, having previously been overlooked due to his unpredictable playing style. In the end, he was probably the Lions' best player in the final game of the tour.

Speaking on the Scottish Rugby Podcast, Russell said he wasn't a fan of Gatland's tactics and that he felt the team performed better after he came into the side:

I thought that all three Tests we should have played more rugby and gone at them a little bit more.

The first two tests we played off nine for two phases and I kind of felt that played into their defence.

We weren't doing much out of the back of it. We were keeping the attack narrow instead of having a wide attack.

The first ten minutes of the third test, there was still quite a bit of kicking and a lot of play off nine. There wasn’t much rugby that actually got played.

I was sitting on the bench thinking we are doing the same as in the last two games even though we’ve spoken about being a little bit more expansive.

With coming on early enough, I was able to try and play that style of rugby...

I kept saying to the boys make sure we get as flat as we can and get the ball out of the hands quickly. If you are confident in your skills and flat enough on them, they can't recover when you throw that pass across the front and kick to the edge.

That’s how I’ve always played, so it’s fine for me.

Everyone was upset and down that we lost the game, but the overall performance was a really good one.

We went out there and did everything we could to beat them and we actually went at them instead of just waiting for them to crack or for a miss kick.

We actually went out and played some good rugby and had a go at them.

It certainly seems like a missed opportunity for the Lions when you look at the talent that was available in the squad. 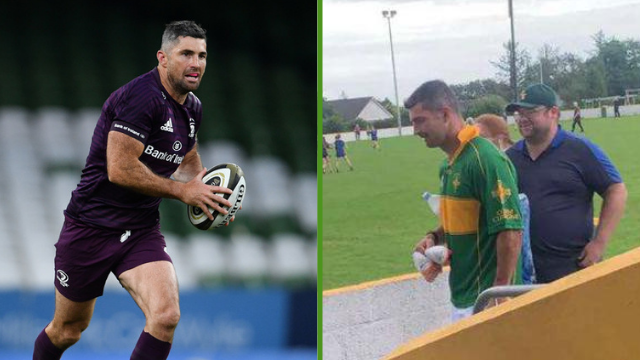 Rugby
6 months ago
By Gary Connaughton
Ronan O'Gara Not Sure Finn Russell Has The Chops To Start In South African Series
Rugby
6 months ago
By PJ Browne
Horgan And McKinley Shoot Down Scot's Lions Test Credentials
Rugby
4 years ago
By David Kent
Watch: Finn Russell Makes A Bollocks Of Conversion In Front Of The Posts
Popular on Balls
Snooker
2 days ago
By Gary Connaughton
Ronnie O'Sullivan Couldn't Get Over Stunning Mark Williams Escape Shot
32