It was a frenetic November for Ireland, full of positives, but Dan Sheehan's debut in green this month was hugely impressive. The Leinster hooker opened his international try scoring account with a maul try against Argentina and generally impressed, with Andy Farrell delighted with his performance after the Japan match. In the two November games, Sheehan was perfect with his 10 lineout throws and seems destined to be competing with Rónan Kelleher for the Ireland #2 shirt for years.

🗣️ "What a way to finish, a great performance."

Sheehan has been on an upward trajectory since making his debut for Leinster in October 2020. He has a big frame for a hooker and is very athletic, drawing comparisons to South Africa's Malcolm Marx. Sheehan also has a somewhat unusual journey to the pro game. There's a lot to like about the hooker, but here are just a few things we love about him and what makes him a special talent.

Sheehan comes from a rugby family. His father Barry played for UCD in the 1980s and 90s while his grandfather Denis Shaw actually represented Leinster in the 1950s. But one fact some rugby fans may not know about Sheehan that for a time he lived in Romania. He moved to Eastern Europe in 2009 after his dad got a job there. Sheehan attended an international school there but didn't get to play a lot of rugby. However, himself and his brother Bobby developed their skills by passing a ball around at home whenever they got a chance. He spoke about how the time spent throwing the ball helped develop his skills.

It probably developed from those days in Bucharest when we had nothing better to do than throw a ball around in the back garden or on the street, just trying to hang on to the rugby we couldn’t get over there.

2. His journey to the pro game

Dan Sheehan came onto Leinster's radar after playing schools rugby for Clongowes. However he was in the same age group as fellow Ireland international Rónan Kelleher and struggled to get past him in Leinster's pecking order. Sheehan even missed out on the Ireland U20 Six Nations squad in 2018. However Kelleher picked up an injury later that year and therefore gave Sheehan a chance with a call-up for the World Championships, but he was back-up again, this time to Diarmuid Barron of Munster .

Leinster still had hopes for Sheehan and thus kept him in the academy on a short-term basis. While other players like Scott Penny and Ronan Kelleher got fast-tracked to the Leinster first team, Sheehan had to hone his skills. Sheehan spent a couple of seasons playing in the AIL and shone, firstly for Trinity and then for Lansdowne. He tore it up in the AIL, scoring a boatload of tries and earning a spot on Leinster A for the Celtic Cup campaign. In that he scored eight tries in eight games and looked ready for the next level.

He himself said he was a "slow burner" but his hard work began to pay off. Sheehan finally made his Leinster debut in October 2020 against Zebre. In that match he scored two tries and got player of the match. He's only kicked on since then.

Hookers do normally score more tries than most forwards due to being at the back of mauls. However Sheehan's record is still extraordinary. In 17 appearances for Leinster, he has nine tries. Last season Sheehan scored six tries from the 402 minutes of game time he got, that's a try every 67 minutes. And it's not just maul tries he scores, he is an excellent runner who is quick enough to hang on the wings like what a lot of modern hookers do.

For example, his second try against the Scarlets in the URC this season shows this modern hooker play as he stayed out wide and was in open space to receive a crossfield kick from Ross Byrne. He may have gotten a bit lucky with the ball bouncing backwards, but he had the awareness to gather it up and score. Always eager to score, you shouldn't be surprised if he can add to his international try record next year.

Great vision by @Ross__Byrne to pick out Dan Sheehan for his second try in the space of 10 minutes, wrapping up a ruthless @leinsterrugby display 🔥#URC | #LEISCA pic.twitter.com/DKVTxQRBIa

Sheehan stands at 6ft 3 which is quite tall for a hooker but he can use his height to his advantage, especially in his throwing as he explained in an interview for Leinster he did in 2020.

It is one of the stronger parts of my game. Maybe, it is my height as well. I have a foot on a lot of hookers when you take the release of the throw into account. I have a better angle to hit the hands of a jumper.

I’ve been told that anyway. I am happy with my throw. I have always been comfortable with it.

Dan Sheehan is also one of the best ball carriers in the URC right now. He is very hard to stop close to the line and is able to run down the flanks and throw audacious offloads. He's gained 101 metres from just 25 carries this season, which is incredibly efficient for a forward who often have to make carries tight to the ruck. For a hooker that is heavily rotated and doesn't start every match his offload statistics are quite impressive. He has four offloads and the only Irish forward to have more offloads than Sheehan is Munster's Gavin Coombes who has five.

Followed by the impact of Dan Sheehan who scored two tries off the bench last weekend, but his most impressive contribution was possibly the below contributions. #LeinsterRugby pic.twitter.com/S7gmCC5E7d

Sheehan is definitely a player to watch over the upcoming years as the battle between him and Kelleher for that starting spot will only get more interesting the more the pair improve.

See Also: Remembering A Moment Of Pure Genius From Brian O'Driscoll At The 2003 World Cup 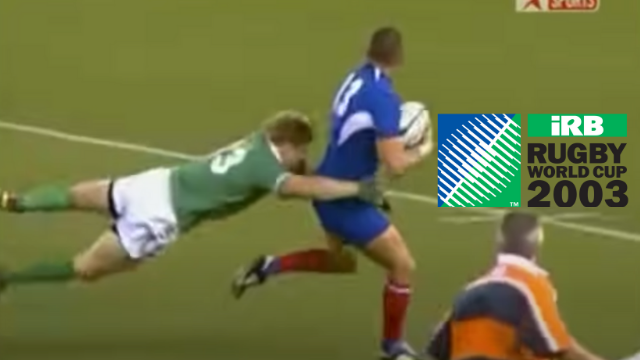