Wales have been denied the Grand Slam tonight, with France scoring two last gasp tries to come away with what looked like an unlikely victory.

Wales led for most of the game, and it looked as though they were about to cruise to a victory when holding a ten-point lead after France had a man sent off with 13 minutes to go.

However, there was to be more drama.

The Welsh became incredibly cynical in their play, attempting to slow down the game as much as possible. They received two yellow cards as a result. Despite this, France were still ten points down with five minutes to go.

Then they turned on the magic.

The first try came after they battered the opposition line for a huge number of phases, with Charles Ollivon eventually crashing over.

It looked like they had blown their chance after knocking on a few phases after the resulting kick-off, but they would get one final opportunity after being awarded a penalty.

From here they launched a brilliant attack, eventually making use of the extra man by finding a man in an acre of space on the wing.

France get their bonus try in the 82nd minute!

No Grand Slam for Wales!

Not only did this result deny Wales the Grand Slam, but they may not win the championship at all.

A bonus point victory for France against the Scots next week would see them crowned champions. Based on this game, you'd certainly fancy them to get the job done.

SEE ALSO: Watch: English Player Could Be In Trouble After Incident Involving Sexton 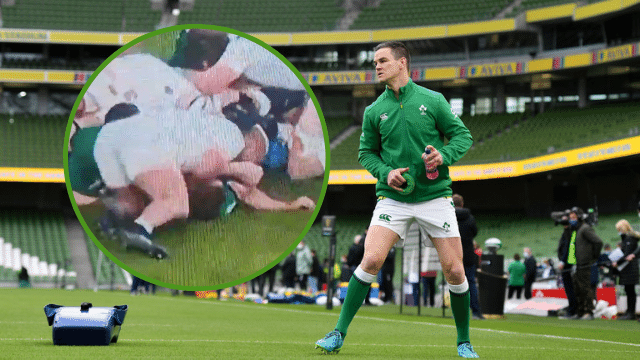 Rugby
3 days ago
By Colman Stanley
The Somewhat Early 2022 Six Nations Standings Predictions
Rugby
6 months ago
By Michael McCarthy
Six Nations To Remain On Free To Air Television After Surprise Deal
Rugby
8 months ago
By Gary Connaughton
Ellis Genge Has Somehow Escaped Punishment For Sickening Sexton Elbows
Popular on Balls
The Rewind
9 hours ago
By Eoin Harrington
Ed Sheeran Was Roasted Twice On The Late Late Toy Show
The Rewind
8 hours ago
By Eoin Harrington
The Best Memes From This Year's Late Late Toy Show
Football
1 day ago
By Eoin Harrington
Just Who Is Ralf Rangnick And Why Did Manchester United Want Him?
60