The French Rugby Federation were left furious with the treatment they received at the hands of their IRFU equivalents during Saturday's Six Nations encounter, according to a rather incendiary report in today's Midi Olympique.

The rugby paper today published an article titled 'THE FRENCH REJECTED', and explained how FFR delegates were left out in the cold - in Bernard Laporte's case, quite literally - by their Irish counterparts during a thoroughly unenjoyable trip to Dublin.

The two national rugby bodies are currently locked in a battle to host the 2023 Rugby World Cup, and it would appear the IRFU weren't overly interested in exchanging pleasantries at the Aviva on Saturday. 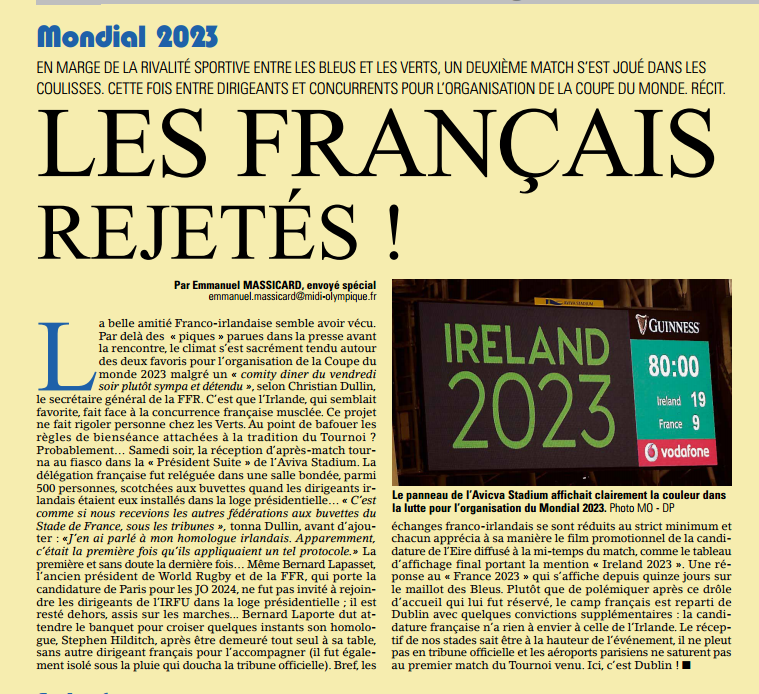 The beautiful Franco-Irish friendship seems to have run its course.

Saturday night, the post-match reception turned to a fiasco in the "President Suite" of the Aviva Stadium. The (French) delegation was relegated to a crowded room of 500 people glued to bars while the Irish were installed in the presidential box.

Moving on from Massicard's not-so-veiled dig at our drinking culture, French rugby's secretary general, Christian Dullin, was outraged by the IRFU's treatment of their French cousins, telling Massicard:

"(It was) as if we were to receive the other federations in the Stade de France, under the stands," Dullin thundered, before adding:
"I spoke to my Irish counterpart. Apparently, this was the first time they had implemented such a protocol."

Even Bernard Lapasset, former President of World Rugby and the FFR, candidate for the Olympic Games in 2024, was not invited to join the leadership of the IRFU in the presidential lodge; he stayed outside, sitting on the steps...

Massicard goes on to explain how poor Bernard Laporte had to deal with the pissing Irish rain as well as perceived banquet shenanigans:

Bernard Laporte had to wait for the banquet to meet his counterpart Stephen Hilditch for a few moments, after remaining alone at his table without any other French leader to accompany him. (He was also left alone in the rain which showered the grandstand).

Massicard concludes that, even if Ireland are favourites to host the tournament in 2023, their prospective tournament would have anything on another French World Cup, even going as far as to take aim at Dublin Airport in the process.

The French candidacy has nothing to envy to that of Ireland. The reception of our stadiums knows how to live up to the event, it does not rain in our official grandstand, and the airports of Paris do not saturate when the first match of the tournament comes. This is Dublin!

The IRFU have since responded to the allegations. Stephen McNamara, the director of communications, said there had been no complaints from the French over the weekend.

He rejected claims that the French committee were sent into a different room to the Irish committee members.

It is actually a really, really big room. So it might have been a case that, with probably 500 people in that room, they didn’t see our guys. But everybody was in the one room.

Everybody went down for the game and came back up afterwards. The lunch room has to be reset for dinner, so that room when you come back up the stairs is closed, and everybody goes into what is in essence a public bar. It’s for premium level, 10-year ticket holders, players’ families and friends, and sponsors. They all go in there and a free bar operates for committee members, and then when dinner starts they’re all invited into the dinner room.

All of our committee guys are in the same room with them the whole time. There is a room just behind the seats that the Irish President, the French Federation president, our [IRFU] president and the junior vice-president go into. It’s a VIP room, so if we have royalty at a game they go in there for a cup of coffee, but everybody else, all of our committee, all of our sponsors go up to that drinks reception room.

He said regular procedure was followed at the weekend and the IRFU have never confronted complaints of this nature before. The same procedure would operate for the England game in three weeks time.

He added that Ireland has a good reputation for hosting visitors and put the anger down to confusion, suggesting that the French appeared to believe that there was a seperate, exclusive room to which their committee members were arbitrarily denied entry. This is not the case, McNamara insisted.

Both countries are vying to host the 2023 World Cup, something the French advertised on their jerseys at the weekend.