This Saturday, Ireland and the All Blacks will lock horns once more, with Joe Schmidt’s team looking to make more history in terms of becoming the first Irish side to win back-to-back Tests against the world’s number 1 side.

But these heady days for Irish rugby were not always so. Far from it in fact. Long-time students of the game will remember with pain the barren era of the 1990s when Ireland were routinely beaten in most Tests; this period came just before the boom in the game on Irish shores that saw the national side collect three Six Nations titles in seven years between 2009 and 2015.

In 1997, the All Blacks came to the old Lansdowne Road on their November tour – which was to end unbeaten – and gave Ireland a 63-15 hiding in the first Test of the tour. That All Blacks side was peppered with household names in the shape of Christian Cullen, Frank Bunce, Andrew Mehrtens, captain Justin Marshall, Zinzan Brooke, Josh Kronfeld and Anton Oliver.

Ireland by contrast had claimed the wooden spoon in that year’s Five Nations and appointed Bath coach Brian Ashton in an attempt to stop the rot.

Making a Test debut against the mighty All Blacks 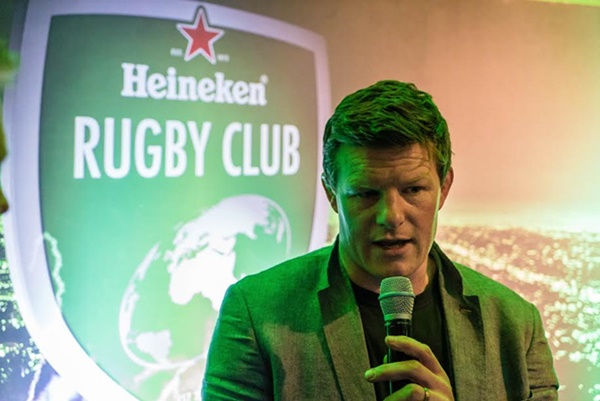 Leinster lock Malcolm O’Kelly was in the side making his Test debut that day, the first step in a career that would lead on to 92 caps, two Lions tours, and three Rugby World Cups. The Tempelogue College man reflected to Balls.ie on a special day for him but also one that ended in a fairly humbling defeat.

“There was a huge disparity in experience and the feeling that the Irish team hadn’t a chance, which was probably a fair reflection of what the two teams were,” says O’Kelly. “But when we went out that day we certainly went out thinking ‘we’re going to win’. We were probably a little but ignorant of how good they were, or at least I was.

"As a first capper I was too wrapped up in my own little chasm to really respect the team that we were going out against. I was so looking forward to it, it didn’t matter who we were playing. We probably never had a chance of winning that match. Certainly that day the New Zealand team figured us out. In the second half they changed their style of play. In the first half we coped reasonably well with them (Ireland trailed 27-15 at half-time) and were very aggressive and closing them down and forced them wide.

In the second half they went up the guts a lot more and went through the pack with great success. Suddenly that opened the game up and we were chasing shadows all of a sudden. New Zealand back then had the ability to change strategy and what they were doing. I don’t remember that we had a strategy.

I was just out there playing the game that I always played, as did most of the other guys. We were 15 individuals but we didn’t really have a huge strategy beyond that. They had players like Zinzan Brooke who were hugely experienced.” 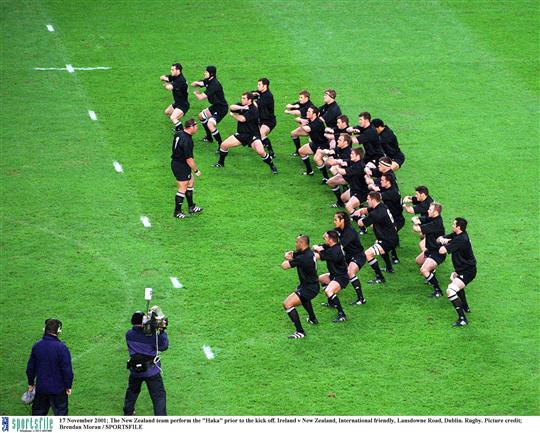 The supposed psychological benefits the Haka lend to the All Blacks have been written about ad nauseam in recent years, but for O’Kelly it was not something to be feared, but instead something to be enjoyed.

“It’s a hugely emotional thing (to face the Haka), and it must be when you perform it as well. But then again these guys are doing it all the time, so I don’t know how much emotion they can feed into it any more,” says O’Kelly.

"I was just soaking it up. We had a meeting beforehand about how we should deal with it. Should we go to the goalposts and do some stretching or should we bind together and face it. We didn’t come up with a solution as opposed to Ireland’s figure of eight (in honour of the late Anthony Foley) facing the Haka in Soldier Field a fortnight ago.

“When you go over to New Zealand you get a dozen Hakas on tour; at welcoming ceremonies and then you’ll be in a pub and someone will be doing a Haka to you. There are some intimidating boys in New Zealand in the pubs as well as on the pitch.

“I also felt privileged to face the Haka and the All Blacks, but I never found it intimidating, I just enjoyed it and soaked it up.”

Keith Wood as a leader against the All Blacks

Ireland’s talisman of that era was hooker and captain Keith Wood and O’Kelly makes no bones about the fact that the Killaloe man was the bedrock of Irish teams from the mid-90s to mid-noughties.

“We really relied quite heavily on Keith Wood that day and really up until he retired (in 2003),” says O’Kelly.

“He was our ultimate leader and we used to joke that if we only had 15 Keith Woods we would have been unbeatable.

He was always very relaxed and always had a smile on his face. He would try and put his arm around the new guys and try and make them more relaxed and embrace them and get them in the fold. As a new capper you can feel quite isolated and not part of it.

It was also the first match of the November series, there’d been a tour before that (Ireland A had toured New Zealand and Samoa and lost six of seven matches) and there was a raft of changes and that was to continue for a while in a transitional spell for Irish rugby. Woody was always smiling and always trying to keep upbeat; he was very aware of his position and played by example. He scored both our tries that day. He was both a leader on and off the pitch.”

A 63-15 defeat is about as comprehensive as it gets in Test rugby and O’Kelly recalls it as a day that he started seeing his own game from a new perspective.

“We got well beaten. It was a big wake-up call for me in the second half as some of my weaknesses were exposed: my strength endurance; my ability to stand up the onslaught of the physicality of the game,” says O’Kelly.

“The first half I was flying and I was smashing into everybody. When it came down to the nitty gritty of the game and it tightened up a bit more I felt I was exposed. I was pretty slight at that stage, only just over 100kg, but I learnt a lot in terms of experience and to realise that I could compete in the same ballpark as the All Blacks. That gives you confidence.” 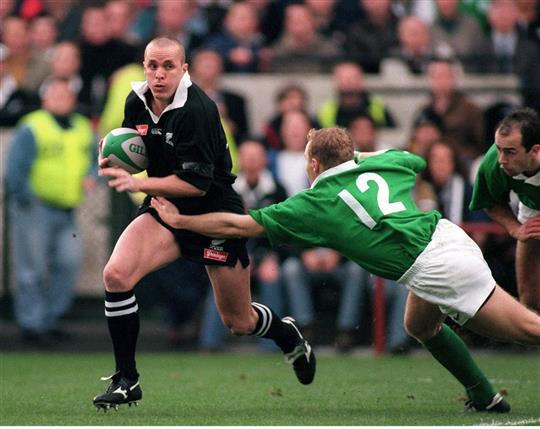 Despite going down so badly to the All Blacks, interestingly, O’Kelly was positive following the game as the teams streamed back to the dressing rooms.

“I would have been quite upbeat. It was my first game and I would have gone into the New Zealand dressing room and swapped jerseys with Ian Jones. It’s hard not to upbeat after your first cap,” says O’Kelly.

“The harder losses are when you lose to a team you know you should have beaten. I’ve had much worse losses than that one. I’d had a personal battle to come back from a fractured ankle, and I’d had a bad run of it, so was just happy to be there.

“At the post-match function I was at the table beside Jones and Robin Brooke and they were toasting to my first cap and I was the toast of the night. It was the beginning of something so special for me.”

Irish rugby has come a long way since 1997 including the aforementioned three Six Nations titles; the 2009 Grand Slam; three Triple Crowns in 2004, 2006, 2007; a first away win over South Africa this year; and a first ever win over New Zealand two weeks ago. What does O’Kelly believe is the foundation of that sea change? In one word: belief.

“You could write a dozen books about the transformation. But there’s been a slow development of real belief; the belief comes with the development of the Irish rugby culture,’ says O’Kelly. “It’s about slowly but surely matching up to the southern hemisphere sides and to England. We were losing to Wales and Scotland and getting hammered by England when I started.

It’s almost as if the confidence with each player that has passed on the jersey has been brought on to another level and now it stands right up there that on any given Sunday Ireland can beat anybody, but that wasn’t the case in 1997.

At the World Cup in Japan they’ll be right in the mix. For me the obvious target would be 2023 if Ireland get a home World Cup. There is a carrot right there.”

Heineken Clubhouse Challenge visits Sams Bar Dublin this Thursday 17th from 8.30pm, with Irish rugby legends Malcolm O'Kelly and Tony Ward. Drop in and be in with a chance of winning some great rugby prizes, including Champions Cup tickets. Visit www.HeinekenRugbyClub.com for more details.

Read more: The IRA, The Haka, And Giving The Finger: Most Memorable Moments From Ireland v New Zealand

Rugby
3 weeks ago
By Jonathan Byrne
Earls To Blindboy: 'That 1 Game Derailed Me For 5 or 6 Years'
Rugby
1 month ago
By PJ Browne
Ireland Pick Up First Six Nations Win After 'Tough' Few Weeks
Rugby
1 month ago
By PJ Browne
The Irish Rugby Early Retirement XV
Popular on Balls
Football
7 hours ago
By Eoin Harrington
Juan Mata Questions Manchester United Management After Dire Season
Golf
2 days ago
By Gary Connaughton
Padraig Harrington Glad He Didn't Have To 'Make A Decision' On Saudi Golf League
Football
1 day ago
By Gary Connaughton
The Frank Lampard Love-In After Everton's Survival Was Downright Bizarre
GAA
2 days ago
By PJ Browne
'It Came At An Awkward Time. I Didn't Think It Would Be So Bad'