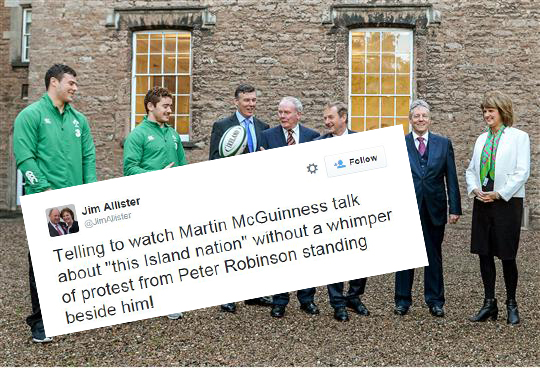 Not everyone is terribly excited about Ireland's Rugby World Cup bid. Amid all the excitement at the announcement at the Royal School in Armagh last Friday, Traditional Unionist Voice leader Jim Allister's tweet struck a typically discordant note.

Telling to watch Martin McGuinness talk about "this Island nation" without a whimper of protest from Peter Robinson standing beside him!

This has thus far been his only statement on the matter. TUV parliamentary candidate for East Antrim, Sammy Morrison, shares his leaders misgivings about the enterprise.

Morrison says there is unanimity within the party that,

...while the anthem of the Irish Republic is often played at rugby events that they don't recognise the fact that part of the island of Ireland is in the United Kingdom.

Morrison laments that one doesn't hear 'God Save The Queen' at Ireland matches and there is no place for the cross of St. Patrick or the Union flag at rugby matches. The 'All-Ireland' aspect of the bid also has caused disquiet within the ranks.

I took exception to Martin McGuinness talking about the nation of the island of Ireland. I also take exception to the contrived political links that Northern Ireland has with the Irish Republic because of the Belfast Agreement.

He did allow that there would be people in Northern Ireland who would be happy to 'see international rugby come to local stadia' but he is indifferent to it.

What I see in predominance when it comes to events at the Six Nations in Dublin is the tricolour and I don't see any recognition that there are people from Northern Ireland who don't feel any allegiance to that flag, and in fact, associate that flag, and I'm conscious that someone in the south would not associate it with this, but this is the reality in Northern Ireland, associate it with a thirty year campaign of terror to force use into somewhere we didn't want to go politically.

Ireland has long been represented at international level by members of the Unionist community. Indeed, two former Irish wingers went on to become Unionist politicians - albeit as part of the most moderate strand of Unionism , the now almost irrelevant Ulster Unionist party.

Trevor Ringland, the hero of the 1985 Triple Crown win, ran for the UUP in East Antrim at the last UK General Election. He quit the party over it's then leader Tom Elliot's refusal to countenance attending an All-Ireland final if an Ulster team made it. He subsequently joined the NI Conservatives.

And Tyrone Howe served as an Ulster Unionist councillor in Banbridge during the mid-noughties.

The TUV even had an ex-Irish international within it's ranks. Davy Tweed, currently serving a prison sentence for indecent assault, played four times for Ireland in 1995.

His first game was against France at Lansdowne Road. At 35, he was an aged debutant and his politics were well known at the time. Many eyes were fixed on him during the national anthem, but, according to Brendan Fanning, he didn't move a muscle - a myth has grown that he belted out God Save The Queen while everyone else was singing 'Amhrainn Na bhFiann' but there appears to be no evidence for this. Before the game, he was reputed to have said 'After 30 caps for my country, I've been selected to play for Ireland!'